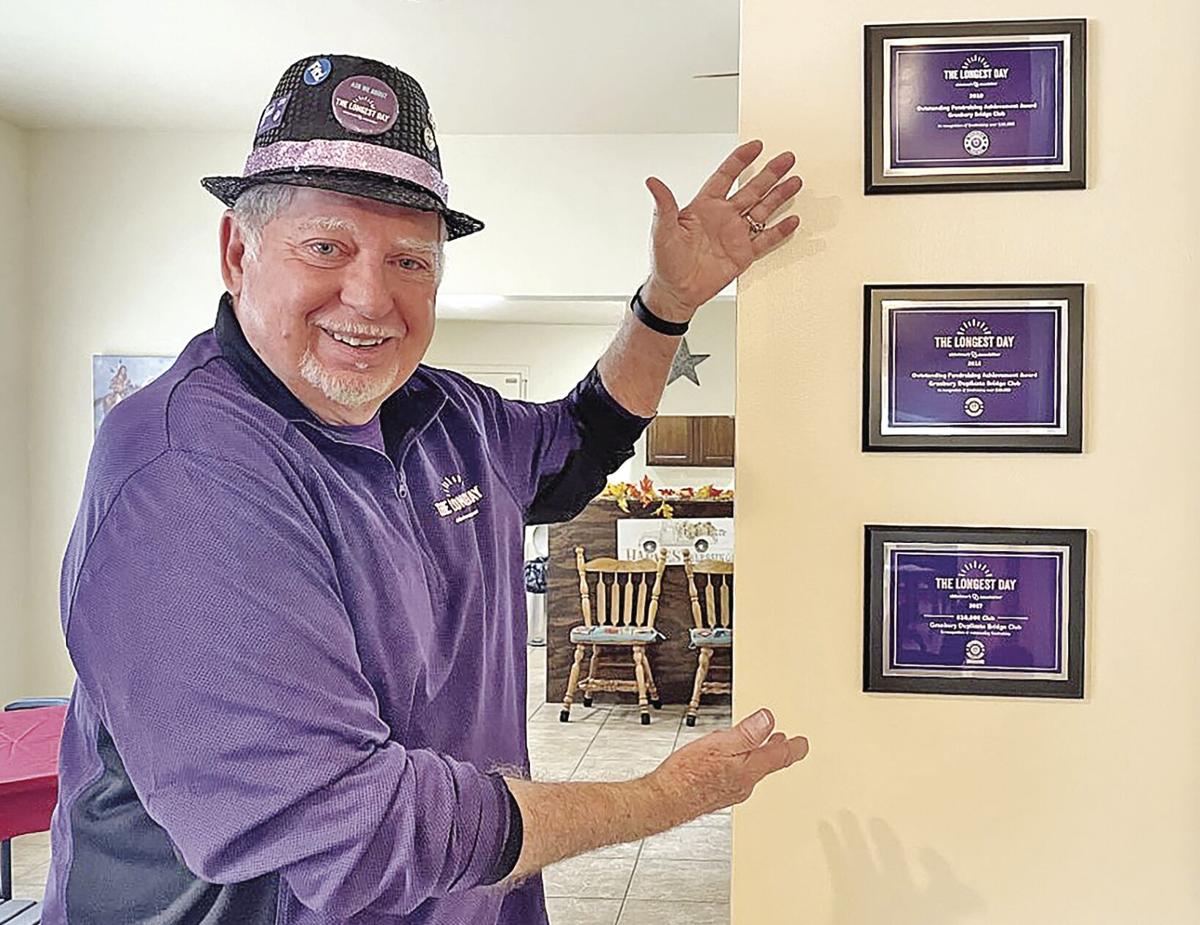 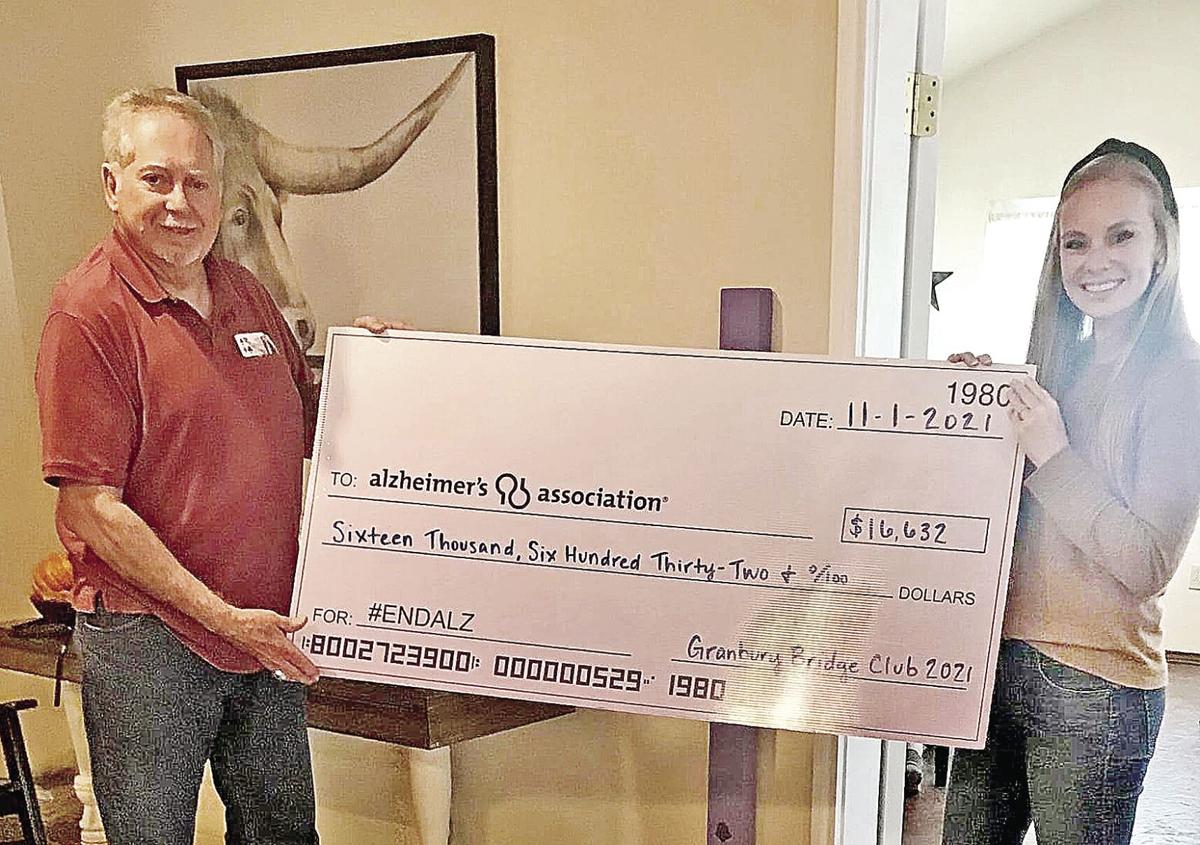 The Granbury Bridge Club was recognized in October by the Bridge Bulletin magazine for ranking as one of the top 10 bridge clubs in the nation that raised the most money for the Alzheimer’s Association.

The Granbury Bridge Club was “the smallest club ever” to make the top 10 by raising $16,600, which was 18% more than 2019 when its total table count for the year was 278 — an average of about five tables per week — according to the Bridge Bulletin.

“The ACBL (American Contract Bridge League) has a charity, and their charity is the Alzheimer's Association, so they encourage the bridge clubs throughout the whole United States to have a fundraiser for Alzheimer's. We were like number nine in the United States; that was just so exciting for us,” said Gwen Faherty, a Granbury bridge player.

The Granbury Bridge Club dedicated the entire month of June to fundraising and offered trophies at three games during the week of The Longest Day in 2021. Known as the summer solstice, The Longest Day — June 21 — is the day with the most sunlight and is dedicated to “fighting the darkness of Alzheimer’s through fundraising activities,” according to act.alz.org.

“This year, we had three different games, and Gwen made lunch for all three. We charged $25 for them to play bridge, which they normally pay $8 for, but they paid $25 For bridge and lunch, and we did those three times during the week,” said Carmond “Fitz” Fitzgerald, bridge instructor and director.

"It (The Longest Day) is kind of a play on words too, because every day with a friend or relative who has Alzheimer's, it's your longest day, and so I think it's kind of neat that they used that in connection with it,” Faherty added.

Alzheimer’s is the fifth leading cause of death in those 65 and over, and unfortunately, there is no cure. Fitzgerald has worked diligently to raise money for the Alzheimer’s Association — and the organization also has a special place in his heart.

“It's near and dear to my heart because my deceased wife passed away in 2018 of Alzheimer's,” he said.

“And Fitz was so sweet,” Faherty said, chiming in. “He would go to see her every day. She didn't know him, but he would always take her a doughnut.”

“She liked the glaze,” Fitzgerald said, with a smile.

Fitzgerald would also sing “You Are My Sunshine,” to his wife, which she responded to.

HISTORY OF THE CLUB

The Granbury Bridge Club first began in Fitzgerald’s home in the summer of 2002 after he joined ACBL and became a director.

“We thought we would just try it (at the Captain’s Texas Cottage) and see how people liked it, and apparently they just love it,” Faherty. “It's very quiet here. It's very private, and the attendance has just been great. People have been so kind and keep saying, ‘We love coming here,’ so I'm thinking bridge will last another year.”

Fitzgerald achieved the rank of “bronze life master” in November 2019, which takes years to achieve.

Recently, three different families from Louisiana moved to Granbury because they were bridge players and saw the town had a club, according to Faherty.

The Granbury Bridge Club currently has 150 members and more are always being sought. The club doesn’t require members to pay dues, just $8 every Monday to play.

A member cannot play unless they’ve been vaccinated and must consent to having their temperature checked weekly.

The club hosts its ACBL sponsored game at noon on Mondays at the Captain’s Texas Cottage, located at 5918 Henslee Ct. A game lasts about three and a half hours.

"We're just so grateful that the community is just so accepting to what he (Fitzgerald) is doing because it's such a worthwhile cause. It's a horrible disease, and every family seems to have someone that is afflicted with Alzheimer's. They've all been so generous, and we're just very grateful for that,” Faherty said. “It’s something that is close to our hearts and we just love to do it.”

Fitzgerald added, “It is a labor of love, no doubt about it. You have to love the game of bridge to play.”

The Alzheimer’s Association returns 77% of donated funds toward research, education and caregiver support, making it one of the most cost-efficient charitable organizations in the nation.

In total, ACBL raised $917,400 for the Alzheimer’s Association in activities connected to The Longest Day.