You have permission to edit this article.
Edit
Home
News
e-Edition
Diversions
Columnists
Multimedia
Obituaries
Classifieds
Share This
1 of 6 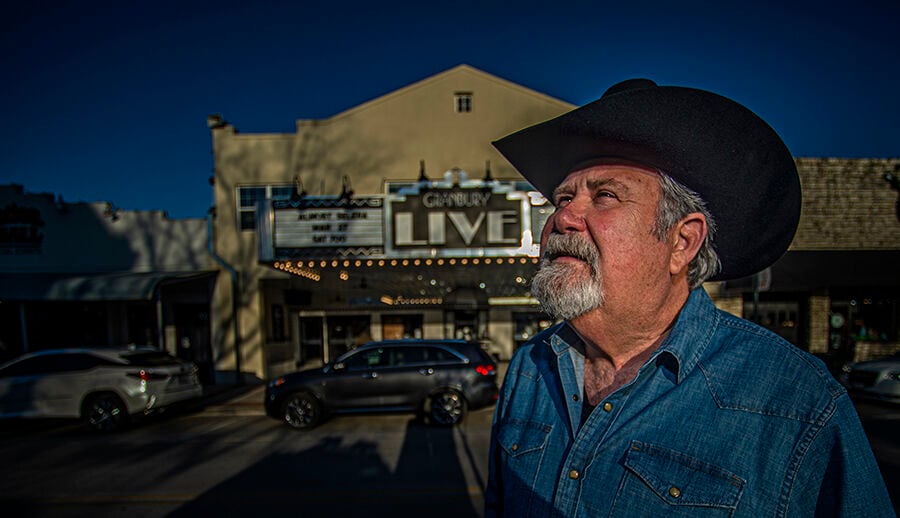 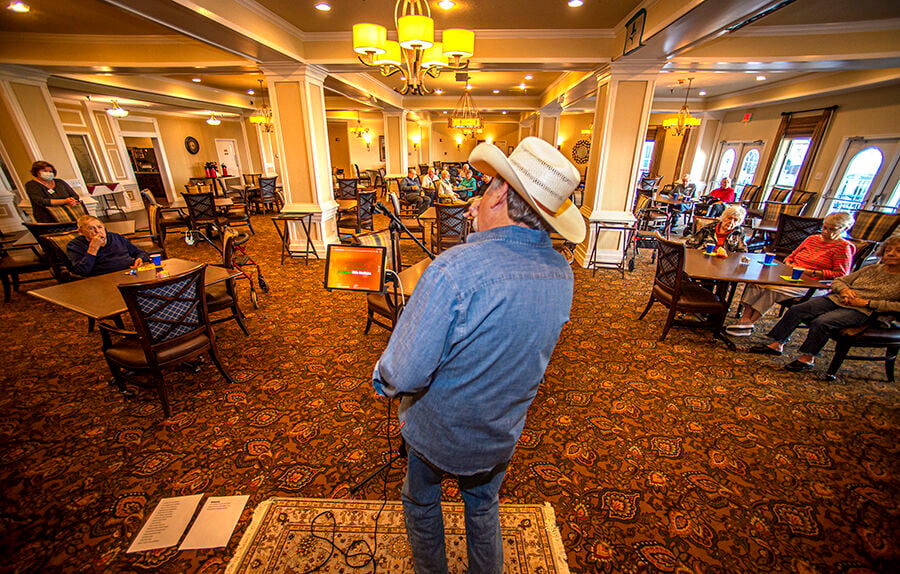 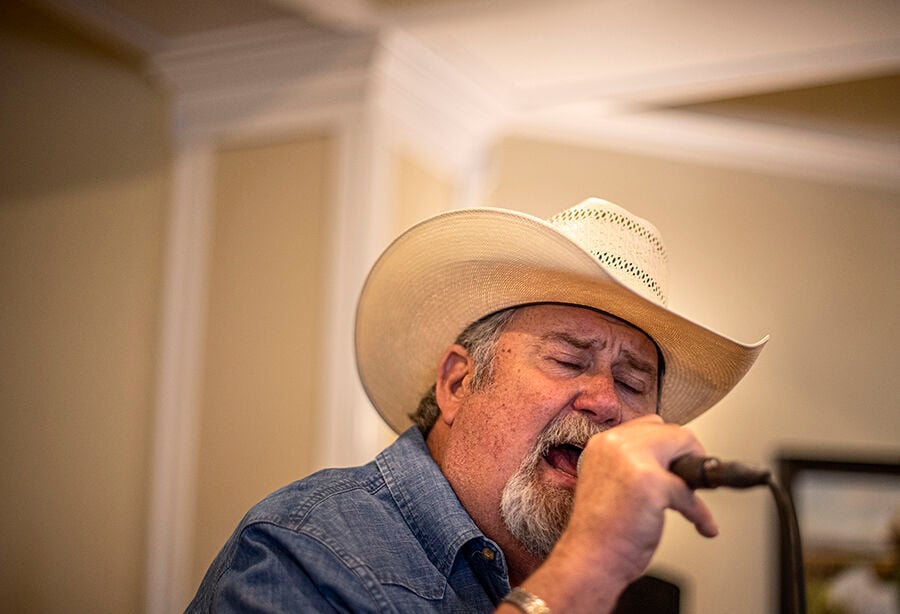 STAR CROSSED Sonny Morgan got his start through the encouragement of musical stars like George Strait. Before he took up the mic, Morgan sold luxury automobiles. 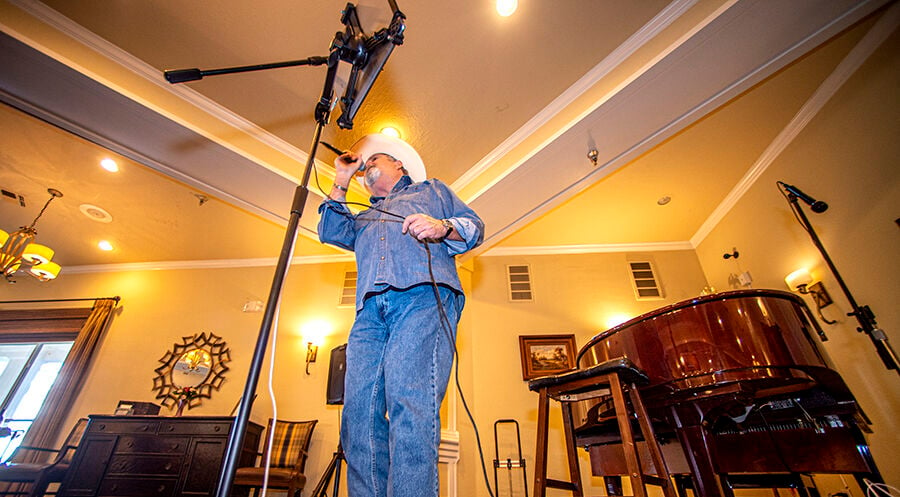 STAGE PRESENCE Sonny Morgan enjoys being on stage as much anything else that he does in life. 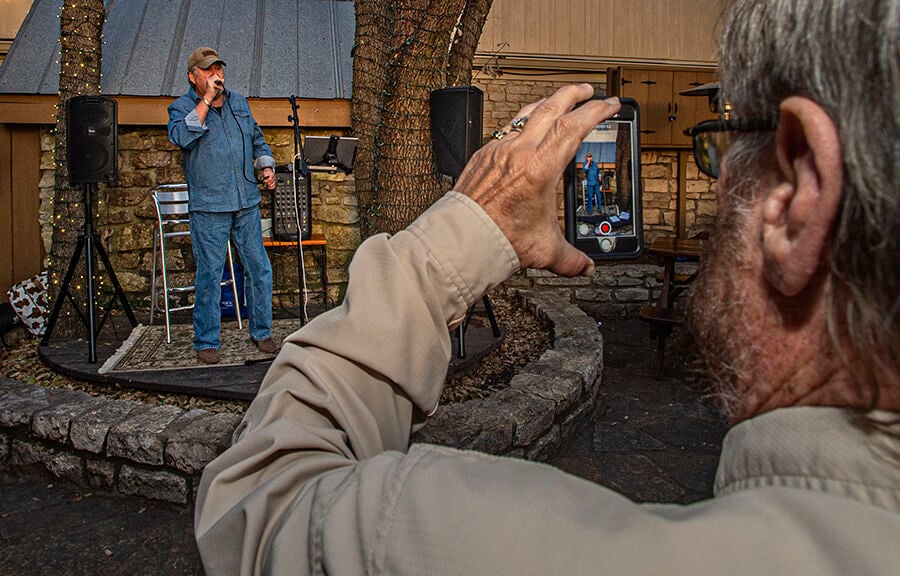 STAGE SIZE There is not a stage too small for Sonny Morgan, like the platform he had to perform on at Ketler’s Biergarten on the Historic Granbuiry Square. 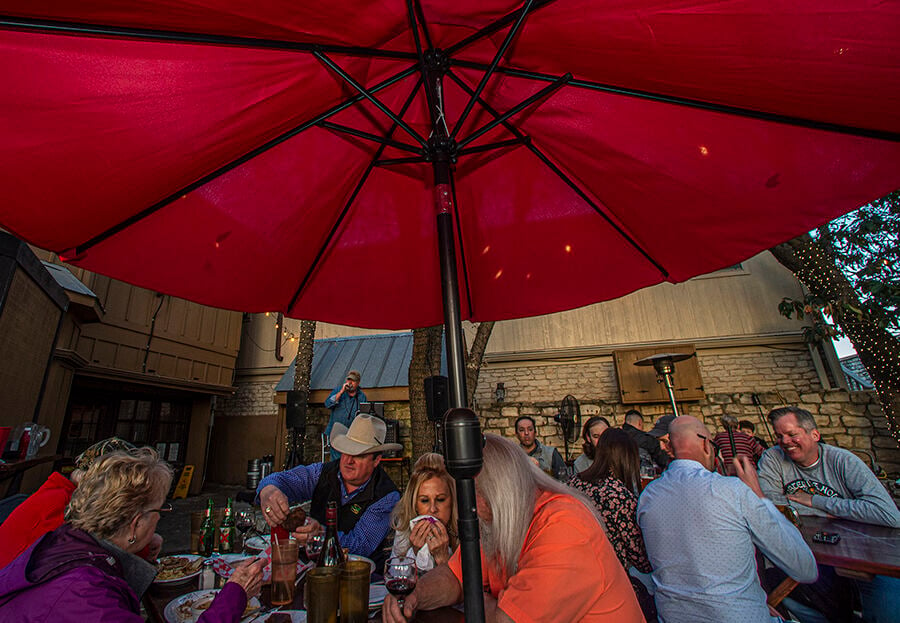 STAR CROSSED Sonny Morgan got his start through the encouragement of musical stars like George Strait. Before he took up the mic, Morgan sold luxury automobiles.

STAGE PRESENCE Sonny Morgan enjoys being on stage as much anything else that he does in life.

STAGE SIZE There is not a stage too small for Sonny Morgan, like the platform he had to perform on at Ketler’s Biergarten on the Historic Granbuiry Square.

A soured business relationship and a debilitating accident left Sonny Morgan up against the wall like a redneck mother.

It was enough to leave a guy with a tear in his beer, moping to a backdrop of sad country songs.

Instead, Morgan decided to sing some of those songs and send recordings to Chuck Rhodes in Nashville. He and the talent agent have been friends for more than 30 years.

Morgan, now 68, had done little singing since his teen years when he sang in the choir at First Baptist Church in Dallas. The coaching he received from choir director Leroy Till apparently stuck, though.

Morgan’s newly discovered singing voice has put him back in the driver’s seat, thanks to Rhodes and a little help from George Strait and Asleep at the Wheel’s Ray Benson, both of whom Morgan met when he co-owned an exotic car dealership in Austin.

Now living in Granbury with his wife Karin, Morgan maybe isn’t a household name like Strait or Benson but he’s not just some Joe Schmoe either. Five of his singles have been on the Texas Regional Chart, including “Lovin Me Some You” and more recently “John Deere Steering Wheel.” He said that two of his songs - “It’s a Beautiful World” written by the late Daryle Singletary and “Everyday Heroes” penned by Buddy Hyatt - ranked No. 1 and No. 2 on the World Country Chart.

Scenes from Morgan’s “Desperately” music video, which can be viewed on Youtube as well as at sonnymorganmusic.com, were filmed on the Granbury square and at Granbury Live, where he is scheduled to perform in June before hitting the road to perform at other venues. Now that people are getting vaccinated against COVID-19, venues are opening back up.

“We’re just so thankful that they have given him an opportunity for his fans to come see a live show,” Rhodes said of Granbury Live. Rhodes is managing Morgan’s singing career through his Nashville-based On the Rhodes Entertainment, LLC.

The journey that put Morgan on a path to Nashville (and to Granbury) began in August 2008 when he moved to Austin and began selling luxury cars such as Bentleys, Rolls-Royces and Aston Martins – the types of expensive vehicles that rich celebrities buy. Strait bought a Rolls from Morgan in 2010 which led to a friendship that continues to this day. (Everything detailed here is according to Morgan.)

Selling cars was all that Morgan had known as a profession, going back to his days in Dallas. Over the years other famous clients included Tom Landry and Jerry Jones of the Dallas Cowboys, Willie Nelson and Charley Pride.

Benson, lead guitarist and vocals for the Grammy Award-winning Asleep at the Wheel, drives “an old beat-up Lincoln” and “wouldn’t be caught dead” owning a high-end luxury car, Morgan said. The two met through Morgan’s dealership, but not because of a car purchase.

The connection happened after Morgan helped another singer, which led to her getting her big break.

PUSHING OUT OF THE BOX

Morgan wanted to hire Lyle Lovett to perform at the dealership’s grand opening but was deterred by Lovett’s $20,000 fee. The negotiations involved Morgan communicating with Lovett’s manager, who he said is now Lovett’s wife. (The woman was apparently April Kimble, though Morgan said he doesn’t remember her name.)

For about three months as the dealership was preparing to open, Morgan would oftentimes go to Eddie V’s Prime Seafood. He liked the crab cakes there. He also enjoyed listening to a young jazz singer who performed at the restaurant. The two struck up a friendship, and Morgan encouraged the woman to push herself out of the box and strive for bigger things. She asked him how to do that.

“Well, you need to get yourself an agent,” he replied.

Morgan helped put the young woman in touch with Lovett’s manager/wife. Next thing he knew, she was no longer at Eddie V’s. After connecting with Kimble and, through her, Lovett, Kat Edmonson’s career took off. (Video of Lovett and Edmonson singing “Baby, It’s Cold Outside” can be found online. The two have performed it several times, including on The Tonight Show.)

Afterward, Benson and Morgan sat outside the dealership on a curb “and talked for three or four hours about singing.” A friendship was formed that night in the spring of 2012.

When Asleep at the Wheel was scheduled to perform at the Albert Dance Hall not far from Fredericksburg in the summer of 2017, Morgan offered to drive Benson in a Bentley so that he wouldn’t have to ride “in a stinky tour bus.” Benson accepted. That night he called Morgan onstage to sing “On the Road Again” and “Happy Trails” with him and the band.

“He put his hand on the mic and he said, ‘Son, you just need to do it. You’re that good,’” Morgan recounted.

Strait, too, had encouraged Morgan but also warned him about how hard pursuing a career in country music could be.

After performing onstage with Asleep at the Wheel, though, Morgan was hooked.

“That’s kind of the boot that kicked me over the fence,” he said.

That was the precise moment a driver going about 60 miles per hour exited U.S. 183 in Austin and slammed into the back of Morgan’s vehicle as he was stopped at a light on a service road. His left arm was badly injured, requiring pins in his shoulder and a plate in his neck.

A few months later, in November, Morgan was out of the luxury car business after a fallout with his business partner.

A door closed, but the doors to the famed Ocean Way Nashville Recording Studios opened. Rhodes arranged for Morgan to record there, accompanied by musicians who play for such stars as Hank Williams Jr., Alan Jackson, Loretta Lynn and Carrie Underwood – “all the world class players that play on all the big hits,” Rhodes said.

Both Morgan and Rhodes are hopeful that Morgan’s singing career will take off now that live performances are coming back. While Morgan’s goal is to someday sing the George Jones hit “He Stopped Loving Her Today” onstage at the Grand Ole Opry, Rhodes has a more immediate goal: building Morgan’s audience and brand.

The show at Granbury Live on Friday, June 25th could help do that.