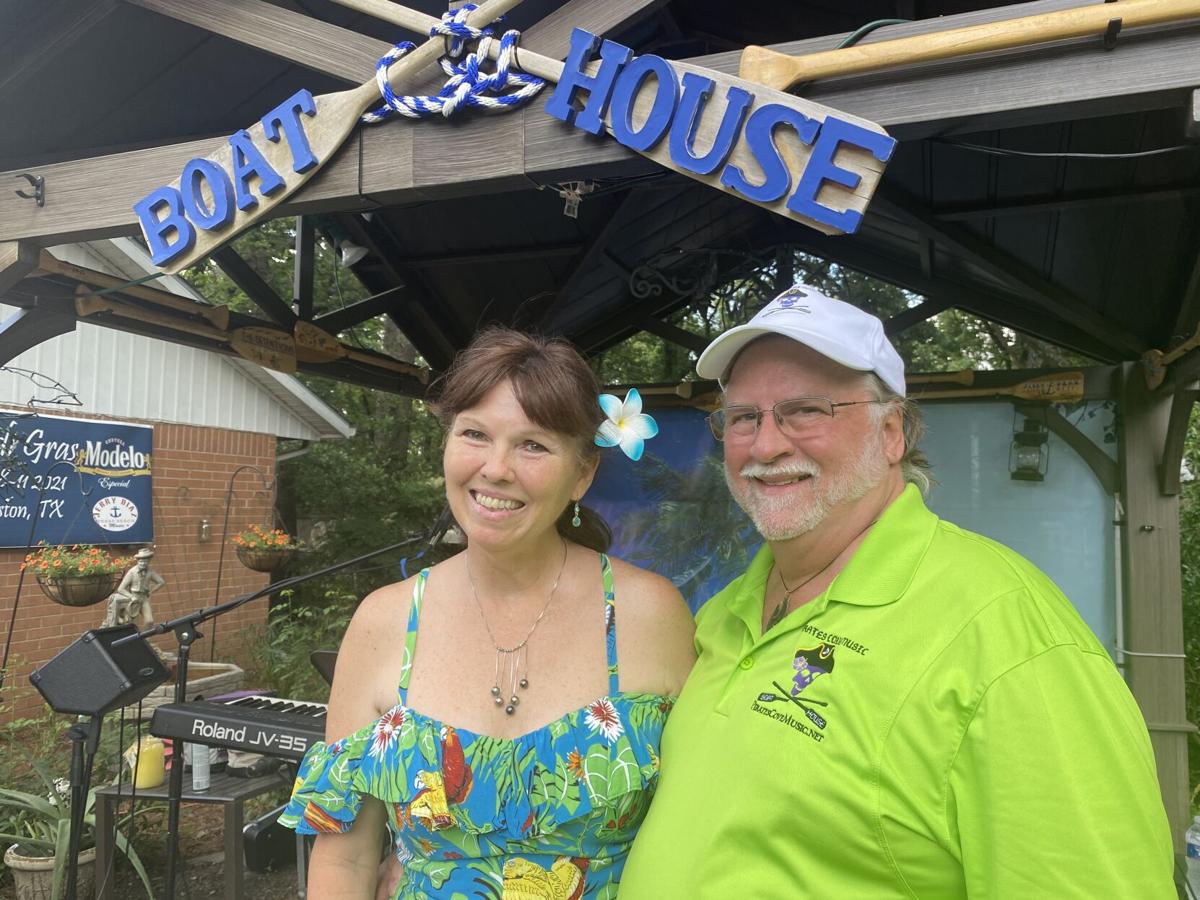 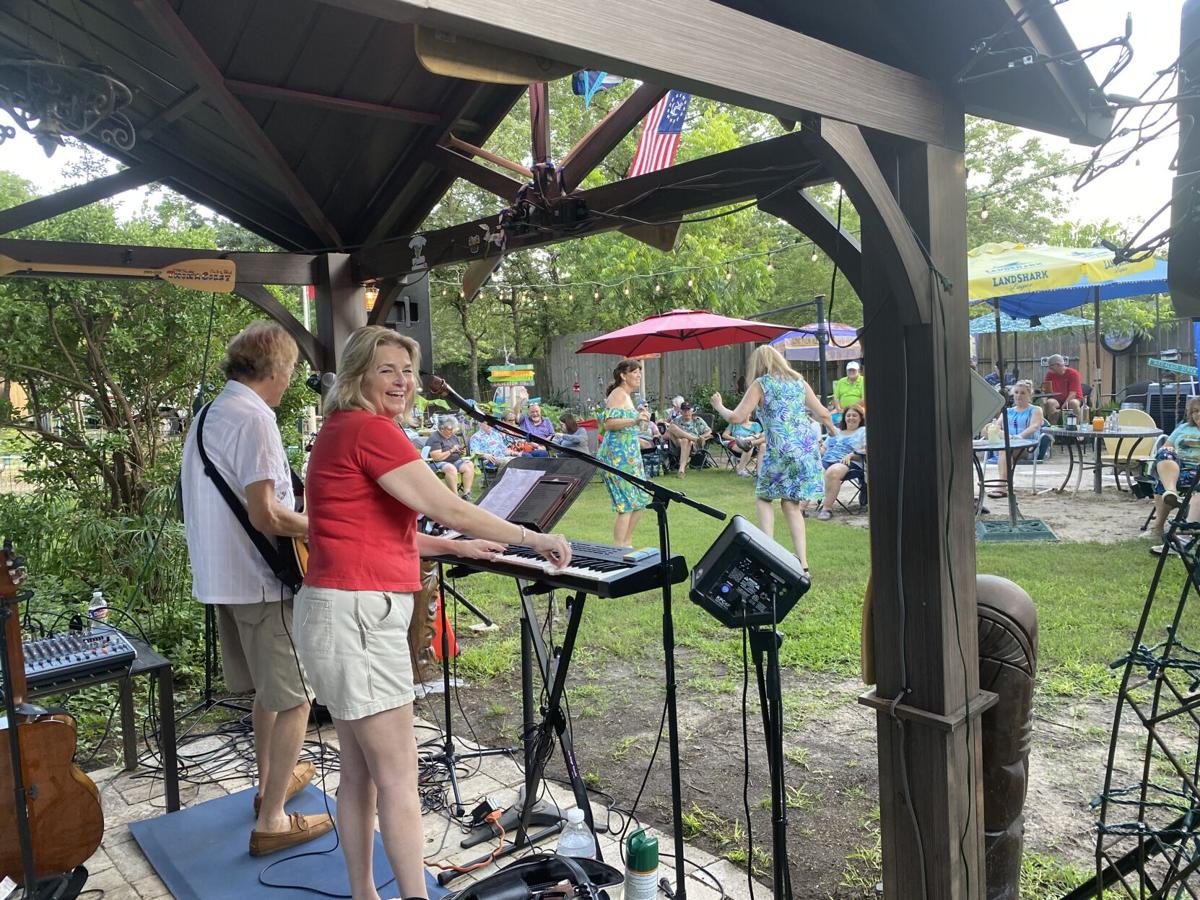 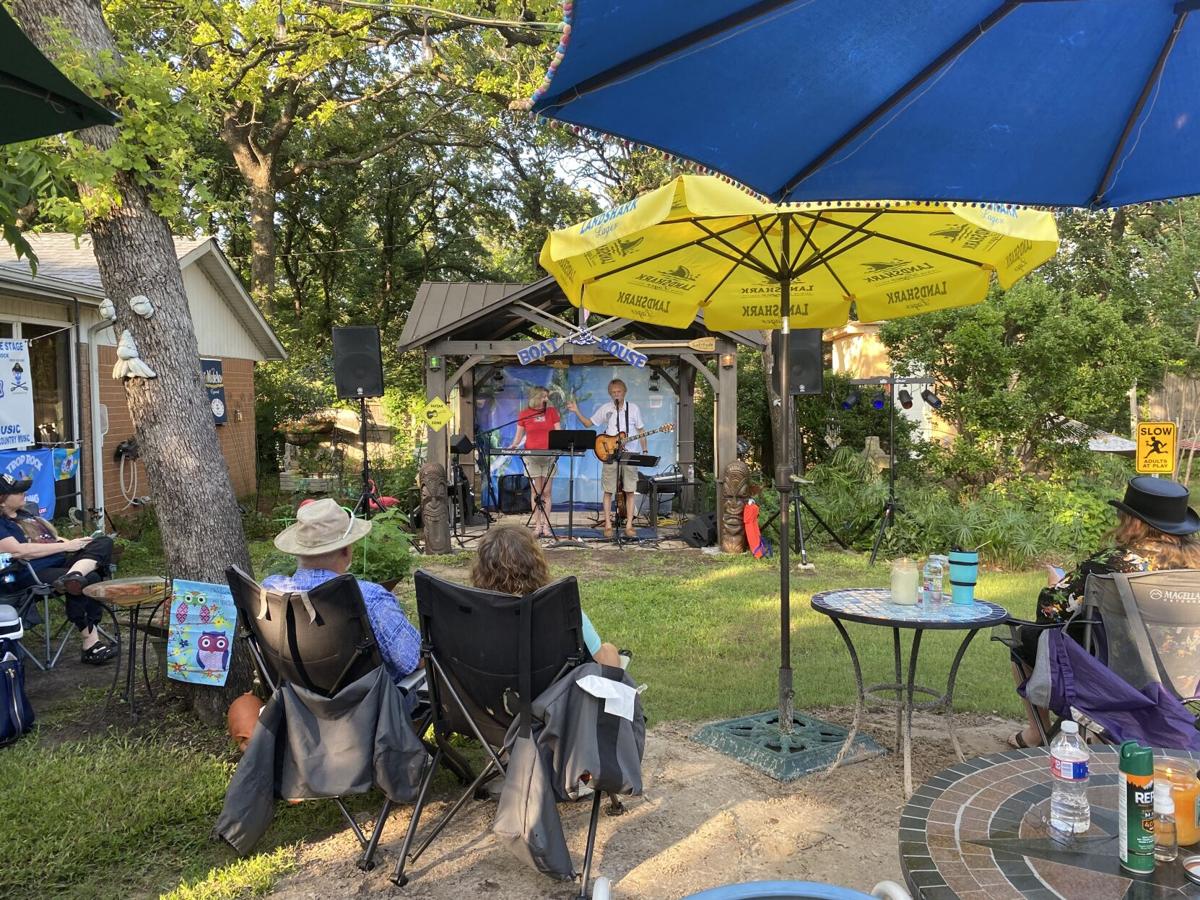 Guests bring their own lawn chairs, drinks and snacks to Pirates Cove and enjoy live music under the shade of oak trees. 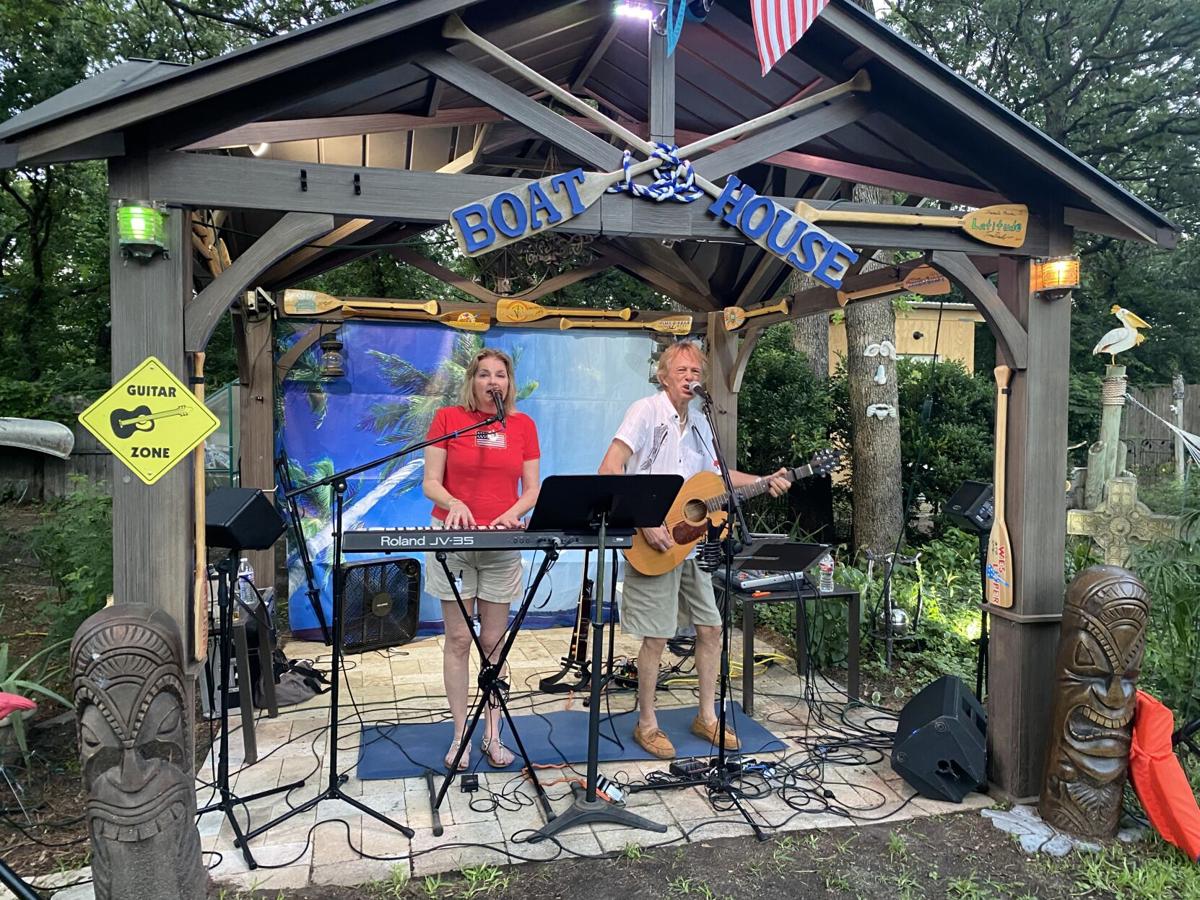 The Useltons built a backyard stage which they dubbed the Boat House. 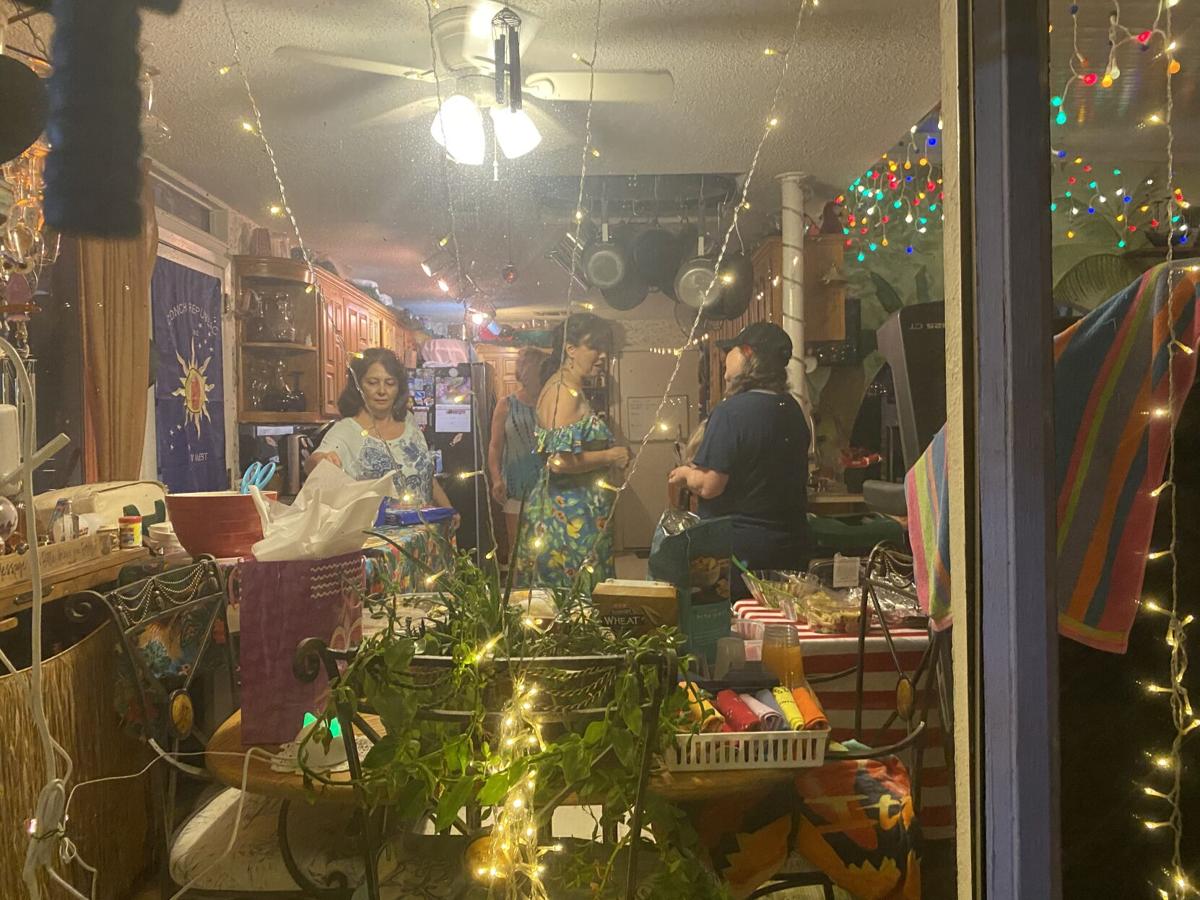 A window gives a view inside Paul and Annie Uselton's kitchen, where there is usually a potluck spread. Annie (center) chats with a guest. 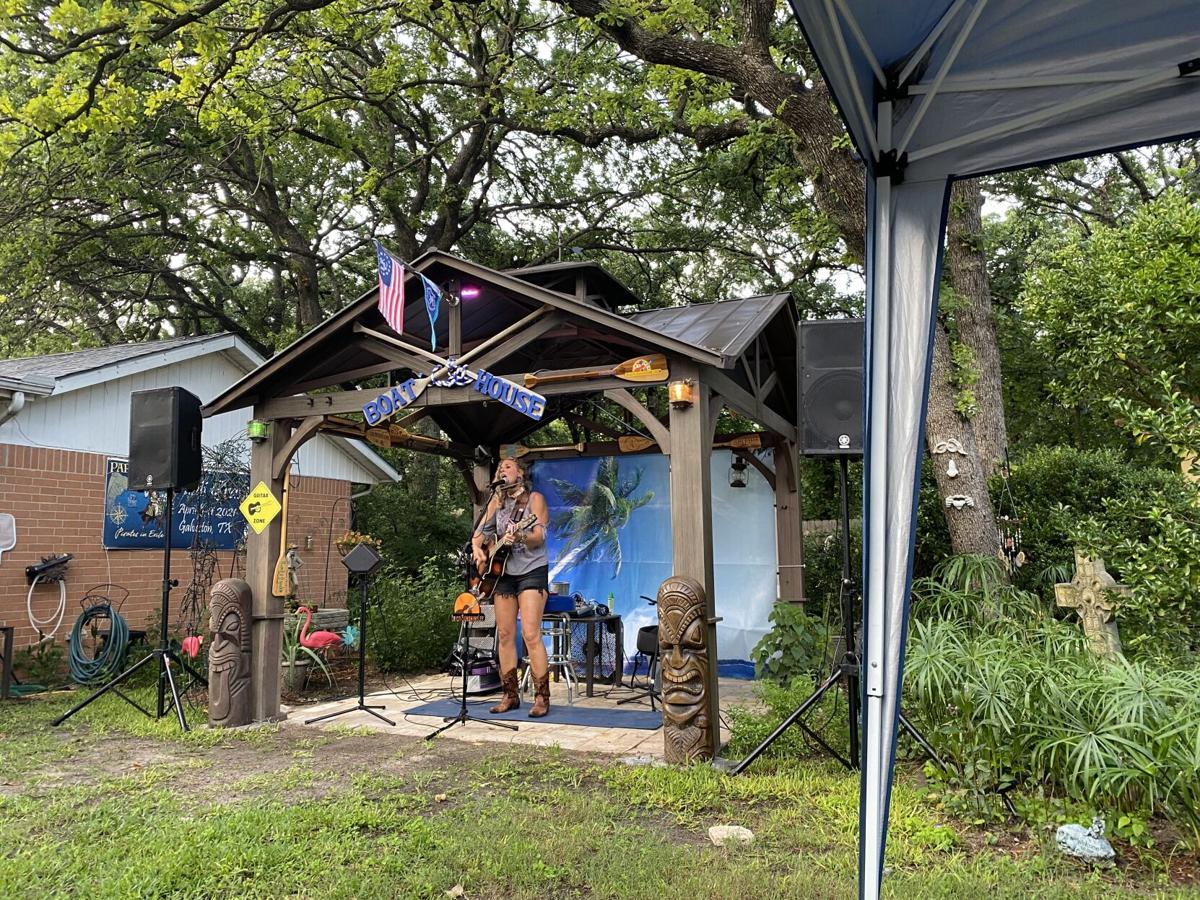 There was no sunshine at Pirates Cove on the drizzly evening of June 5, but there was nevertheless an audience for a performance by Erica Sunshine Lee.

Guests bring their own lawn chairs, drinks and snacks to Pirates Cove and enjoy live music under the shade of oak trees.

The Useltons built a backyard stage which they dubbed the Boat House.

A window gives a view inside Paul and Annie Uselton's kitchen, where there is usually a potluck spread. Annie (center) chats with a guest.

There was no sunshine at Pirates Cove on the drizzly evening of June 5, but there was nevertheless an audience for a performance by Erica Sunshine Lee.

Paul and Annie Uselton’s Trop Rock entertainment venue Pirates Cove Music is known among Parrothead groups – fans of Jimmy Buffet and the lifestyle his music represents — but it may be Hood County’s buried treasure.

Not many locals know about it.

The venue location is the Useltons’ backyard on Pecan Lane off US Hwy. 377, not far from the Kroger Marketplace/H-E-B intersection in northern Hood County. Top-notch musicians perform there on the small “Boat House” stage — complete with a backdrop of blue skies and palm trees — that the couple built on their oak tree-shaded double lot.

Now that both Useltons are retired, they’re having a blast traveling with some of their favorite musicians and hosting concerts at their own little Margaritaville.

Paul, a Granbury native, spent 36 years working in operations and training at the Comanche Peak Nuclear Power Plant in Glen Rose. Annie, who was born in Michigan, worked for several large companies as a technical writer.

The pair met in 2010 on a charter bus going to the North Texas Irish Festival. They married in 2012 and left the work-a-day world behind in 2017. They began hosting live music events the following year.

House concerts have become a thing in Florida, the Sunshine State, but the Useltons hope to make them popular in the Lone Star State as well, at least in the North Texas region where there are Parrothead groups.

“They’re starting to spread throughout the country,” Paul said of the homegrown venues. “There’s probably five or six in Texas now.”

The Useltons are gearing back up with concerts after a year of COVID-19. Since their venue is outdoors, they were able to hold a few socially-distanced concerts during that time, but overall 2020 was a bad year for entertainers.

Backyard entertainment venues do not necessarily equate to loud, drunken parties. That’s not what Pirates Cove Music is about.

“The house concert is a listening environment,” Paul said. “People sit and listen to the music and songwriters tell the stories behind the music, where they were and how they got the inspiration. The artists like it because they’re not just background music, like at a bar. And the people like it because they get to know people that are really good musicians. These are top line musicians. A lot have played in Nashville. Some have written No. 1 songs.”

Scheduled Pirates Cove events take place on Saturdays from 5-9 p.m., with the music starting at 6. The first hour is “Happy Hour” — a time for everyone to get settled and visit. Summer hours, which just took effect, are 6-10, with Happy Hour from 6-7 p.m.

Attendees make a $20 donation, which goes directly to the band/singer. The Useltons make no money as hosts.

Guests must be 21 or older. They bring their own lawn chairs, beverages and snacks. Everyone is welcome to bring a dish for a potluck but doing so is not required.

The Useltons open up their kitchen for the potluck spread, and concert attendees are welcome to use their guest bathroom. The couple is in the process of building a bathroom in their spacious backyard for added convenience.

“These people, they’re a little on the older side; they’re established,” Paul said. “Most of them are friends. If not, they become friends. So, I’m not worried about them being in the house.”

The ambiance includes landscaping (Annie is a master gardener), a small, manmade pond and flashing, colored lights for the grassy dance floor. Annie is not shy about getting dancing or a conga line started.

A concert on the Saturday of Memorial Day weekend featured Latitude, otherwise known as Tom and Michelle Becker. (Smoked brisket for the potluck was provided by the Useltons.)

Other entertainers are scheduled through Sept. 1 and include Aaron Scherz, Drop Dead Dangerous, Ricky Lamb and Rob Davis, The Detentions and Mike Nash. Details can be found at piratescovemusic.net. The Useltons also have a Pirates Cove Music Facebook page and RSVPs can be made there.

As summer ramps up, the Useltons’ large oak trees, misters and swamp fans will provide relief from the heat. If it rains, they have tarps.

Performers often spend the night in the Useltons’ camper, which allows the couple, who appear to have never met a stranger, to get to know them better.

Just before the Latitude concert, which drew about 30 attendees, Annie noted that Pirates Cove events draw people “from all over the Metroplex, but you could count on one hand the number of people from Granbury.”

She feels that locals either don’t know about the venue or haven’t yet wrapped their heads around the concept of house concerts, even though she and Paul have handed out cards about Pirates Cove while participating in events on the square.

“It sounds like a great idea, but would you actually do it?” she mused.

The Useltons said they have received great reviews about their backyard venue from those who have attended concerts there.

“The best feedback that we get,” Paul said, “is when they come back and bring a friend.”