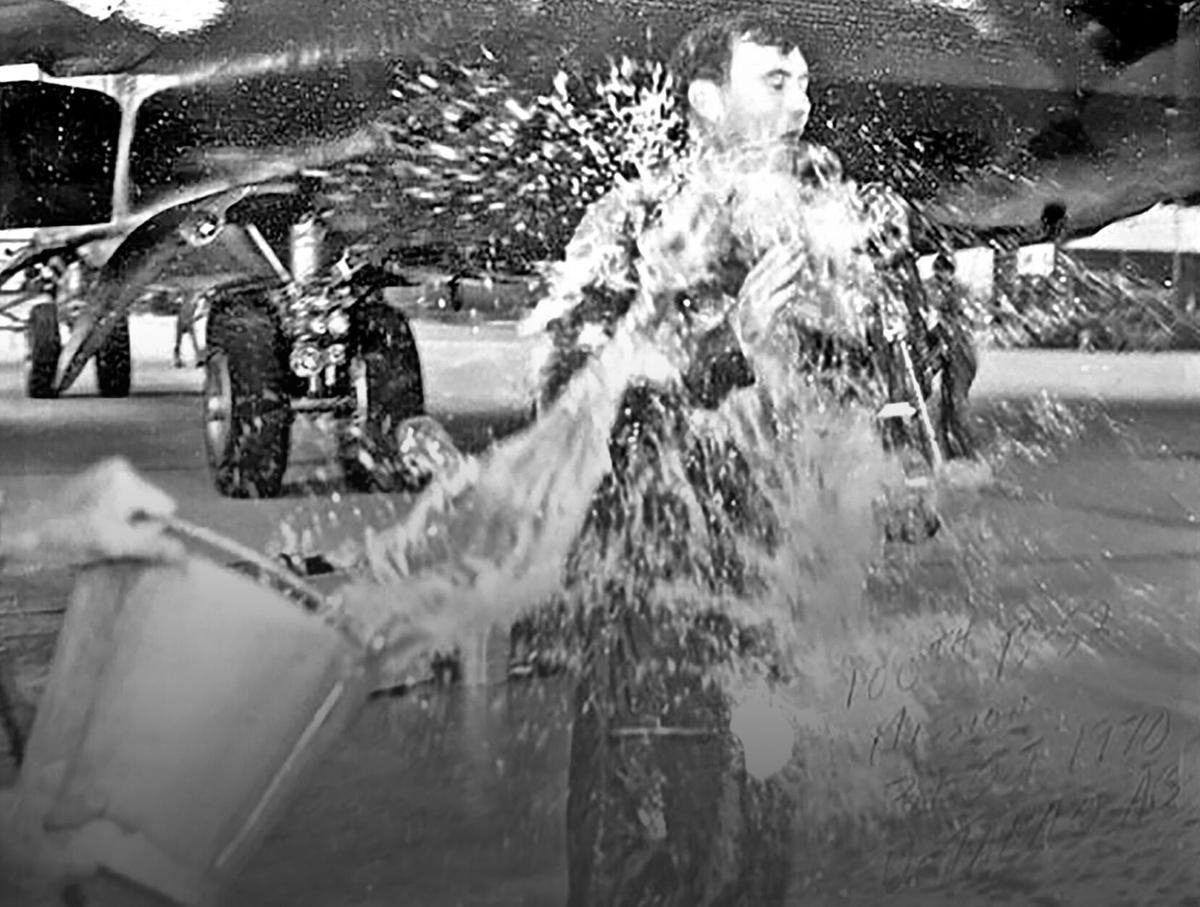 WET DOWN: John Jaeckle Sr. finished his 100th combat mission in Vietnam in October of 1971 in the B-52 airplane. Jaeckle received a "wet down” during this momentous occasion. 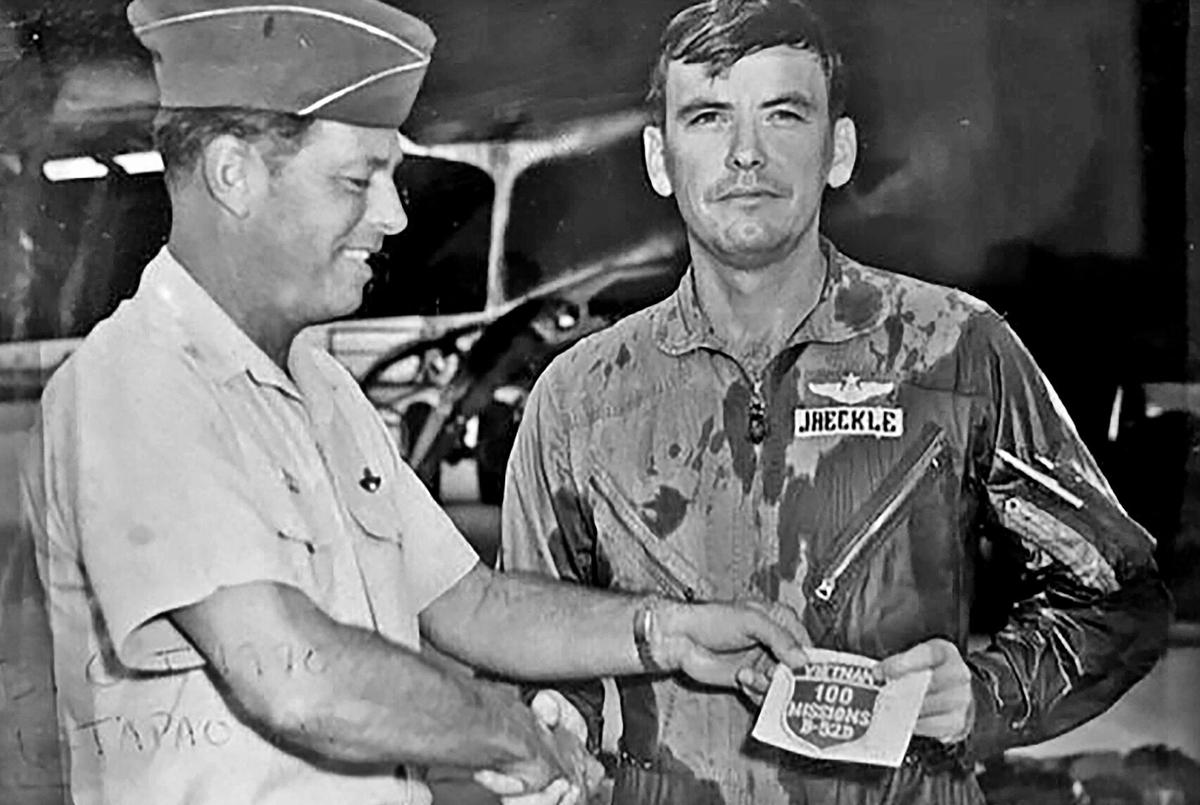 PROUD TO SERVE: John Jaeckle Sr. receives his 100-mission patch from the director of operations in 1971. Jaeckle flew in more than 150 missions by the end of his 30-year career in the Air Force. 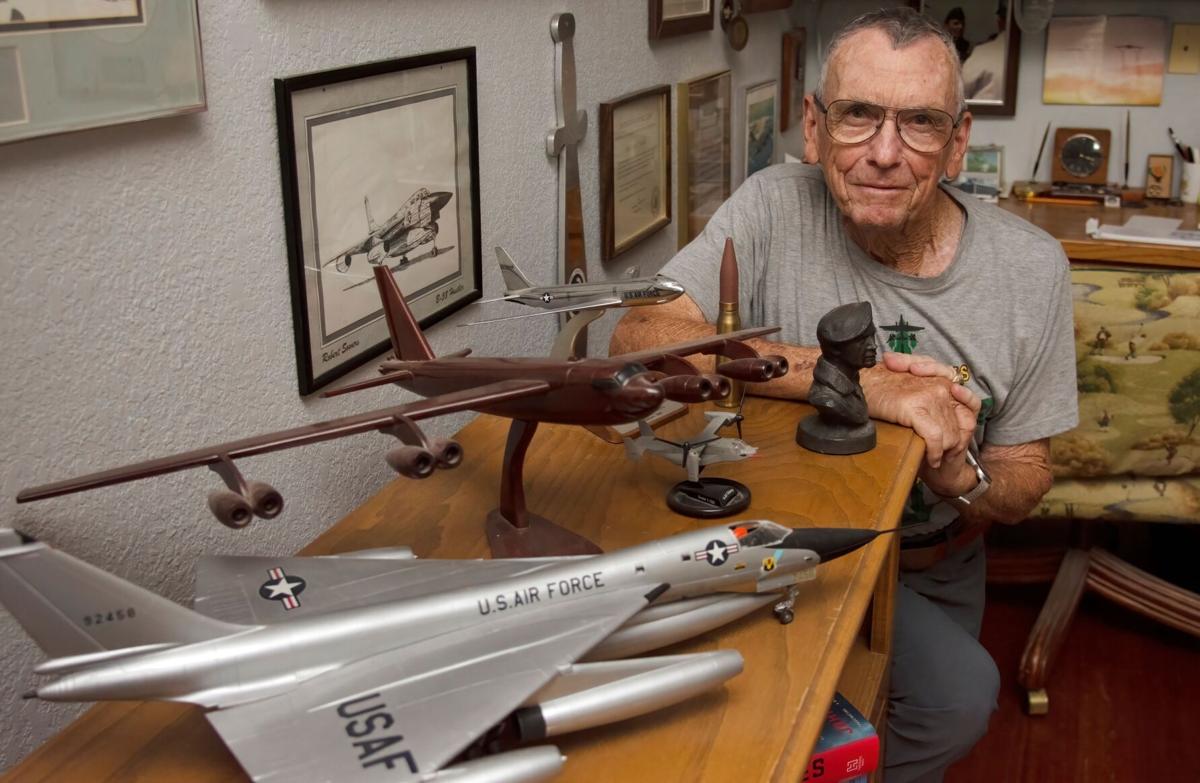 FOREVER AN AIR FORCE PILOT: Jaeckle said he misses his time in the Air Force. He especially misses flying, the missions and the camaraderie he had with his fellow airmen.

WET DOWN: John Jaeckle Sr. finished his 100th combat mission in Vietnam in October of 1971 in the B-52 airplane. Jaeckle received a "wet down” during this momentous occasion.

PROUD TO SERVE: John Jaeckle Sr. receives his 100-mission patch from the director of operations in 1971. Jaeckle flew in more than 150 missions by the end of his 30-year career in the Air Force.

FOREVER AN AIR FORCE PILOT: Jaeckle said he misses his time in the Air Force. He especially misses flying, the missions and the camaraderie he had with his fellow airmen.

Growing up in the 1940s, John Jaeckle Sr. was instantly thrown into the World War II era, and his early childhood was filled with military influences.

Jaeckle, 82, grew up in San Antonio, which was home to five military bases at the time. His siblings — brother and brothers-in-law — were all members of the Air Force.

“There were constantly airplanes flying overhead, so I was very affected by watching all this,” Jaeckle said. “I used to climb trees and think I was flying, playing like I was in an airplane because that's what my potential brothers-in-law were doing in the European theater and my brother was in the Japanese area in the Pacific, so that was kind of a foundational thing that made me want to fly.”

Jaeckle currently lives in Pecan Plantation with his wife of 55 years, Joan. They have three children: Kristine, John and Edmund, plus seven grandchildren and two great-grandchildren.

He attended Central Catholic High School in San Antonio where, coincidentally, his best friend’s father was a pilot from the 1930s and had an aviation supply business.

After receiving a few rides from his friend’s father, he knew that he wanted to fly airplanes for a living.

Jaeckle attended Texas A&M University, while also attending Air Force ROTC. During the summer, he participated in the Student Training in Engineering Program, where he worked at the Kelly Air Force Base in San Antonio as a junior engineer.

“It was all about aviation, airplanes, fixing and designing things for airplanes, and repairing parts,” he said.

He earned his private pilot license during his senior year in college and graduated from Texas A&M with the class of 1960. Jaeckle began pilot training at Craig Air Force Base in Selma, Alabama in November 1961 and graduated on Dec. 7, 1962 — the 21st anniversary of the attack on Pearl Harbor.

His first assignment was at Sheppard Air Force Base in Wichita Falls, where he chose to fly a B-52 airplane.

Jaeckle also participated in Airborne Alert (Operation Chrome Dome), which was a Cold War-era mission that took place from 1960-1968. During the mission, Jaeckle, along with his crew, would fly a B-52 strategic bomber aircraft fully armed for combat near the Soviet Union.

“That (the B-58 Hustler) was a very unique airplane in that it could cruise at twice the speed of sound, some 20 miles a minute,” he said. “It was absolutely amazing. The takeoff speed heavyweight was like 250 miles an hour. The landing speed was almost 220 miles an hour when you originally touchdown and it was a very delicate airplane, delicate in terms of sensitive to fly.”

On the slower side of aviation, he also flew an EC-47 in combat. He flew a variety of reconnaissance missions in that plane, which he called “the electronic goony bird.”

During the latter portion of his career, Jaeckle had assignments at the Air Force Personnel Center, the Pentagon in Air Force operations and Strategic Air Command (SAC) headquarters as deputy inspector general.

Jaeckle also attended the Air War College in Alabama, where he was selected as a full colonel.

“That was kind of the senior school where we not only learned about planning war, we learned what it cost in terms of the economics,” he explained. “It was a broad-based school, and we had mostly Air Force people but also people from other services. Additionally, we had allied officers from Germany, France, Spain, South America, Africa and Middle Eastern countries as part of the class.”

Jaeckle completed the Air War College with the designation of “distinguished graduate.”

During the Cold War era, he commanded the 319th Bombardment Wing at Grand Forks Air Force Base in North Dakota and was also the commander of the Strategic Air Command’s standardization and evaluation group, which was responsible for performance assessment of SAC tanker and bomber flight crews worldwide.

He amassed more than 5,000 hours flying a variety of aircraft during his Air Force career and flew in more than 150 combat missions during the Vietnam War.

“Some asked us, ‘Did you ever get shot at?’ Yeah, we got shot at in the B-52 once in a while, not much. In the EC-47, if we went in the wrong areas, in the reconnaissance, we’d get shot at a couple of times,” Jaeckle said. “We did lose a couple of airplanes, but it wasn't a routine thing in terms of you know, ‘We're gonna get shot down today.’ I mean, you always think about what’s going to happen, but then you tend to say ‘Well, maybe they will (get shot at) but not me.’ You always think that something is gonna happen to the other guy.”

After 30 years, Jaeckle retired from the Air Force in 1991 and went to work for American Airlines as a ground school instructor for the Boeing 757/767 airplanes. A few years later, he was promoted to management, and assumed the role of supervisor at American Airlines for the Boeing 757/767 airplanes until his retirement in 2004.

The most memorable moment during Jaeckle’s military career was an unfortunate one, during which six airmen lost their lives.

“In July of 1967, we were in a formation. There were actually six B-52s involved, and the two lead airplanes had a midair collision over the South China Sea and blew up. A number of people were killed,” Jaeckle said. “They were slightly in front of us and there was a sharp noise and then a large, huge fireball. It was just one of those memories that stuck with me.”

One of Jaeckle’s happiest memories was the day he graduated from pilot training.

“I had known of a famous general and I had suggested him to be our guest speaker. He had a great reputation. His name was General Spicer, and he was famous for giving these great speeches. We're all anticipating what he's gonna say and he stands up, and says, ‘When I graduated from training in 1930, some guy stood up and I don't remember anything he ever said so you'll remember this — that's all I'm going to tell you. Go out and have a lot of fun.’ I never forgot it,” Jaeckle said, chuckling.

Jaeckle remains active in the Granbury Military Officers Association. He plays golf and continues to work out during his free time.

“During my time on active duty, I used to run a lot. I've run seven marathons,” he said. “I ran the Boston Marathon in 1983 in just a little over three hours.”

Jaeckle said he misses his time in the Air Force. He especially misses flying, the missions and the camaraderie he had with his fellow airmen.

“Every day I looked forward to going to work,” he added. “Every day was rewarding. You accomplished something.”