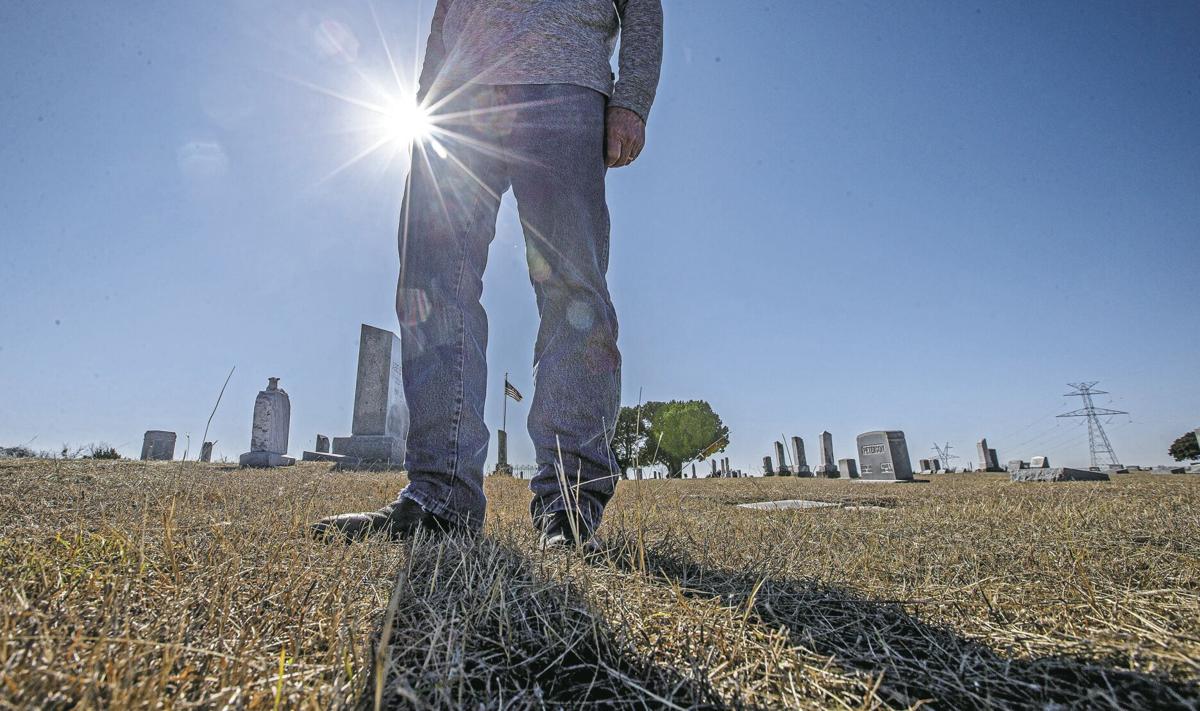 STAR TURN ON THE SILVER SCREEN: The Cresson Cemetery is also famous for its appearance in a 1992 romance/Western film, "Pure Country," starring George Strait and Rory Calhoun. 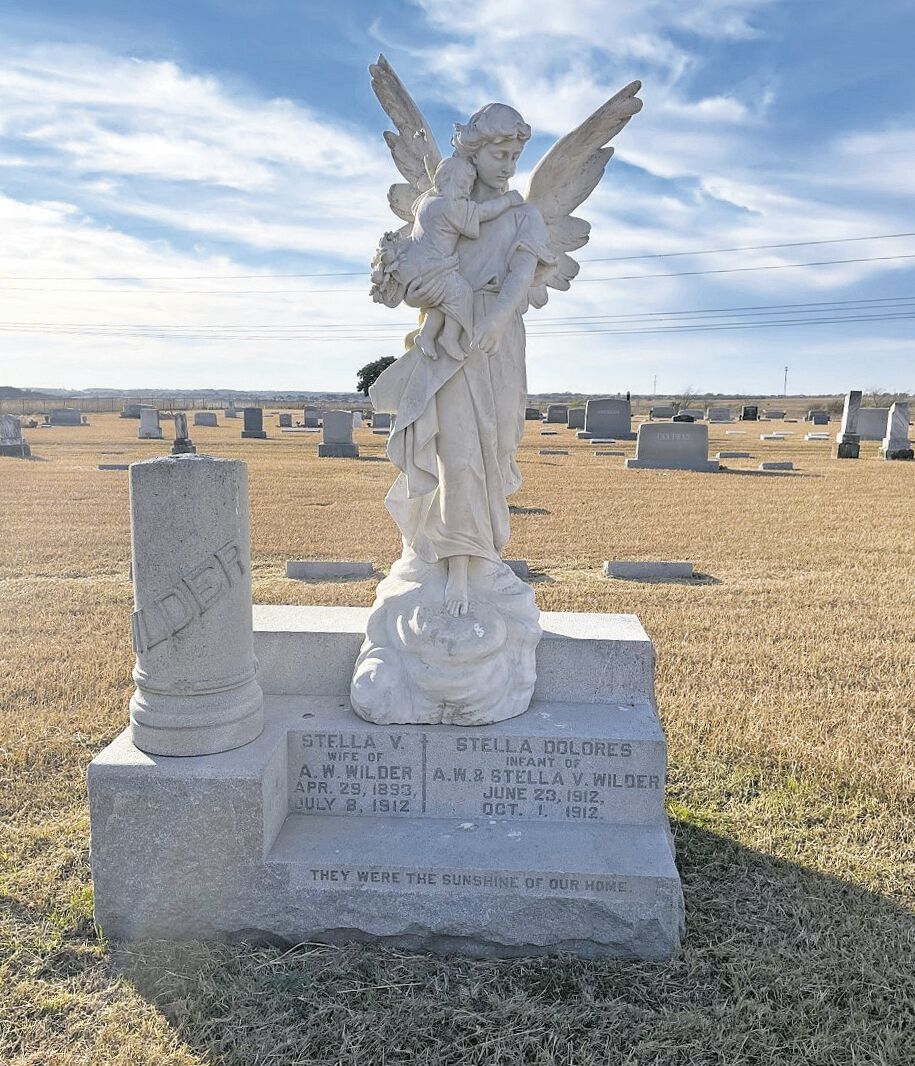 THE ANGEL: One of the most beautiful headstones in the cemetery is a statue of a large angel holding her baby, with the inscription, "They were the sunshine of our home," featured at the bottom of the statue.

STAR TURN ON THE SILVER SCREEN: The Cresson Cemetery is also famous for its appearance in a 1992 romance/Western film, "Pure Country," starring George Strait and Rory Calhoun.

THE ANGEL: One of the most beautiful headstones in the cemetery is a statue of a large angel holding her baby, with the inscription, "They were the sunshine of our home," featured at the bottom of the statue.

The Cresson Cemetery may be smaller than most, but the unique stories of its inhabitants paint a much larger picture of the rich history that is buried there.

Encompassing seven acres, the Cresson Cemetery is home to 885 graves — 111 of which were military veterans, making up 12% of the cemetery, including:

⦁ 14 veterans who served in the military

Four veterans also served in more than one war.

James Elam, a Texas Scout, is the only veteran in the cemetery who has a fence around his grave.

“Texas scouts were men that were hired by the Confederacy to stay here in the area to protect the women when the men went off to the Civil War,” Holt said, who has been a volunteer at the cemetery for 35 years. “I think there were like 20 guys that were Texas scouts who were here to protect locals from the Union. By 1865, the Union Army had moved to the other side of Abilene, so there were no Indians here from what I gather in the history that I read about him. After the war, the confederacy awarded him veteran status, and so as a result, he is a veteran.”

“Somebody said, ‘Well, why was he privileged in getting a fence?’ And I said, ‘I don't know. That was before my time,’” said Don’s wife, Karon, secretary of the Cresson Cemetery Association.

Joe G. Jr. and Charlotte J. Huffman were married and met while in the Navy, as they were both firemen.

Joe passed away in 2015 and received a huge funeral service complete with a bagpiper and 40 firetrucks.

“Midway through the service, here's all these firemen in their outfits, and all of a sudden all of their microphones went off,” Don said. “The fire department has a beautiful thing called ‘The Last Call,’ and it's the last call or where they call for that particular fireman and they called his number three times and then they said, ‘Transferred to a permanent station.’ CareFlite flew three helicopters in a formation.”

One of the most beautiful headstones in the cemetery is a statue of a large angel holding her baby, with the inscription, “They were the sunshine of our home” featured at the bottom of the statue.

The mother, Stella V. Wilder, was born on April 29, 1893 and died on July 8, 1912 at just 19 years old. She married A.W. Wilder and together, they had a child, Stella Dolores Wilder. It is assumed by Don that the mother passed away due to complications of childbirth, as she died just 10 days after giving birth. The baby passed away at only four months old, from an unknown cause.

The husband, A.W. Wilder, is not buried in the cemetery, but someone in the family had the beautiful full-sized angel transported by ship from Italy.

Stella V.'s grandmother, Alice C. Crawford, was buried one space over from her granddaughter. Don and Karon discovered in 2020 that Stella V.’s mother, Eva Christine Lyles, was buried between her and her grandmother.

"The interesting thing about these four generations is that no males relating to the family are buried in the cemetery and in the 30-plus years we have been going to the cemetery we have never seen anyone place flowers on any of the graves,” Don said. “A sad story no doubt, but the beauty of this memorial is a true statement of love and with that, there is no better story.”

Two graves at the Cresson Cemetery are famous for their “love story.”

“You may not realize it, but all cemeteries have some form of love story; you just have to listen,” Don said.

In 1894, a young girl by the name of Mary Loula Crook fell in love with Dr. William H. Jones. Although there was a 17-year age difference, the couple was soon scheduled to be married. However, Crook got sick and Jones, a doctor, couldn’t do enough to save her. Crook died at the age of 17.

“Within a year, he became an alcoholic and he literally grieved himself over her death, and within a year, he died,” Don said. “The only thing he asked the family was if they could please bury him on the family Crook lot so he could be close to her. Well, they not only buried them side by side, they gave them matching headstones.”

The Cresson Cemetery is also famous for its appearance in a 1992 romance/Western film, “Pure Country,” starring George Strait and Rory Calhoun.

“The truck set up just outside the gate there, and they were filming right down there by my mother's grave. They had brought in a headstone and laid it there,” Don said. “It was a cloudy day, and they had two guys with big ol’ huge mirrors and every now and then the guys would determine they could spot enough light on that grave and so they would run out here and take a few minutes and then the clouds would move. This goes on from about 9:30 that morning, and about two o'clock they came to me and asked me, ‘Is there a place we can take the ladies to use the restroom?’ I said, 'The closest restroom I can send you to would be the restroom in Cresson at the gas station.’ Here are all these ladies about eight of them dressed in 1903 funeral dresses. I would’ve given anything to be out there, taking pictures of the reactions from Cresson residents.”

The movie crew also filmed right in front of Karon’s mother’s ranch, who actually got to have a nice, long chat with Rory Calhoun.

“My mother-in-law went to see that film and she was over there at the house and George Strait was trying to sing a song, but he was trying to act like he was drunk. She's standing there and this voice comes from beside her and says, ‘I don't think George Strait's gonna make this song.’ And she turned around and it was Rory Calhoun the actor. He had walked up right beside her in his bib and coveralls because that was his role in the movie. He was a foreman of the ranch. Him and her each had a ball,” Don said.

“We've got more requests the last four or five years about, ‘Where's that headstone?’ I wish we would've put it out by the gate,” Don said, reminiscing.

Cresson started the first cemetery north of town in 1885, on the right side of what is now Highway 171. On May 5, 1885, a Fidler infant was buried, which became the first known burial in the old cemetery.

Between the years of 1885 through 1895, 14 additional graves were added to the old cemetery.

On July 1, 1895, Albert L. Crenshaw deeded land for a new cemetery, selling four acres for $10. Also, that same year, 15 graves moved from the old cemetery to the “new” Cresson Cemetery.

In 1956, the chain link fence was installed as well as the entrance gate.

The cemetery also at one time had a reputation of almost being a child cemetery, as there were a disproportional number of children’s graves to adult graves during the early years of measles. During that time, there were 43 graves of infants younger than a year old and 30 graves between the ages of one to 10.

Don added, “I've come to the conclusion after all the research on the cemetery Karon and I've done over the years that all cemeteries have a story to tell.”