Starting at
$100.00 for 365 days
Get Started
View all rates
You have permission to edit this article.
Edit
Home
News
e-Edition
Diversions
Columnists
Multimedia
Obituaries
Classifieds
Best of 2022
Share This
1 of 2 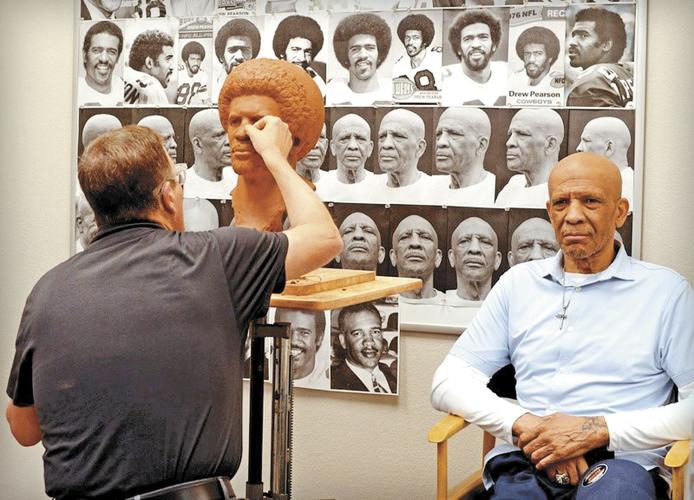 BUST A MOVE: Scott Myers spends about 30-36 hours a week sculpting each bust. Former Dallas Cowboy receiver Drew Pearson recently sat for Myers in his studio located on the outskirts of Granbury. 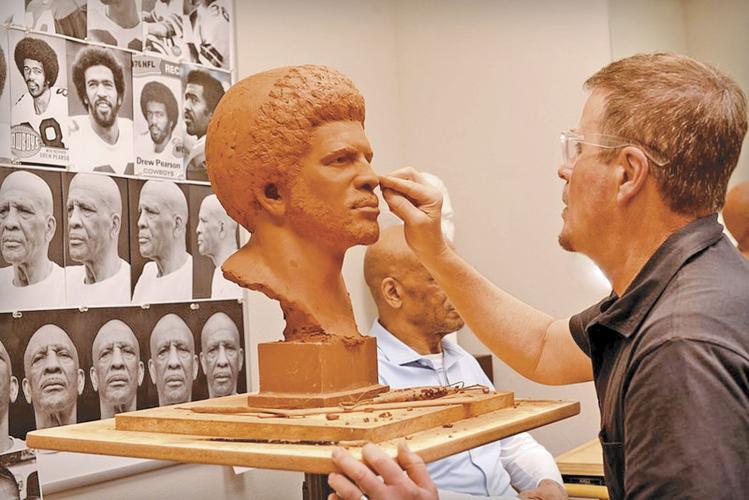 NOT HIS FIRST RODEO: Dallas Cowboy Drew Pearson is Scott Myers' 24th project for the Pro Football Hall of Fame.

BUST A MOVE: Scott Myers spends about 30-36 hours a week sculpting each bust. Former Dallas Cowboy receiver Drew Pearson recently sat for Myers in his studio located on the outskirts of Granbury.

NOT HIS FIRST RODEO: Dallas Cowboy Drew Pearson is Scott Myers' 24th project for the Pro Football Hall of Fame.

Local veterinarian Scott Myers is diligently working on sculpting a bust of former Dallas Cowboys wide receiver, Drew Pearson, for his induction into the 2021 Pro Football Hall of Fame in Canton, Ohio, this fall.

Pearson was known as “Mr. Clutch” from several of his catches in game-winning situations, most notably his "Hail Mary” reception from quarterback Roger Staubach that sealed the victory over the Vikings in a 1975 playoff game. It is known as one of the most famous plays in NFL history.

“The concept is they need to look like when they played. You don't do them as they are today,” Myers said. “Then, you want to make sure that the player’s involved and they pick where in their career they would like to be depicted or look. He (Drew) got to pick and he wanted to be 1975-1976.”

Myers uses pieces from several photos of the players throughout the years to get a “likeness” in order to sculpt an exact replica of the person for the bust.

“It's a process and there's a lot of anatomy, so we do our best through photographs to go back in time and you turn this older person into a younger person,” he said. “I get a likeness as an older person, and then I gently go back in time, so that they can become 30.”

Each player also gets to choose their expression on the bust, whether it’s happy, angry or intense. Pearson told Myers he wanted to be “serious and focused.”

He said it takes him about six to eight weeks, working 30-36 hours a week to complete one bust.

“I sculpt the piece here and make the mold in Texas,” Myers said. “We ship the mold to Utah, the piece is cast in Utah, then the piece has the color patina put on all at the same time, so all the heads will match. Those heads are photographed, then they're shipped to Canton, Ohio, and then they're going to ship that head from Canton back to Dallas when he gets his day at AT&T Stadium.”

Myers said when he was in school, he was known as the “class artist.” His junior high school art teacher took him to art galleries, where he developed an interest in sculpting and painting. She told him to get a job and do his art on the side, so Myers decided to attend Texas A&M University and earned a doctorate in veterinary medicine. He sold his art to pay his way through college.

“Finally, I got to a point I said, ‘I really want to become a sculptor.’ I found people that I wanted to take instruction from and so forth. Well, one of the sculptors that I really admired, he had a student, and his student was just beginning to do some work for the Pro Football Hall of Fame,” he said. “I studied with the student for 12 years, and then I was given an audition. Three years later, another audition. And then after that, it went from there to being steady work.”

There are two other artists who sculpt busts for the Hall of Fame, but they both sculpt full time. Myers has been a full-time veterinarian at the Pet Hospital of Granbury since 1990.

He said he enjoys sculpting for the Hall of Fame and being given an assignment with a deadline.

“I like being part of history,” Myers said. “Drew Pearson is a very, very well-known iconic Dallas Cowboy, and his story is well known of how long it's taken him to get into the Hall of Fame. He should have gotten in, in my opinion, years ago. I watched him as a kid, on December 28, 1975. I watched him catch the ball that made him famous that was called the Hail Mary. I never in my wildest imagination thought that when his day came to go in the Hall of Fame, number one, he would take so long and number two, I would be doing his head which is really kind of a neat thing.”

Drew Pearson’s bust is currently unfinished and will be unveiled during a home Cowboy game this fall.

“He (Drew) was very easy to work with,” Myers added. “I’m excited for him. He’s well deserved and way past due.”

The Pro Football Hall of Fame will also be holding its enshrinement ceremony for the Class of 2020, which was postponed due to the COVID-19 pandemic, on Saturday, Aug. 7, 202

Blessing of the Pets to raise money for ‘pawsitive’ cause