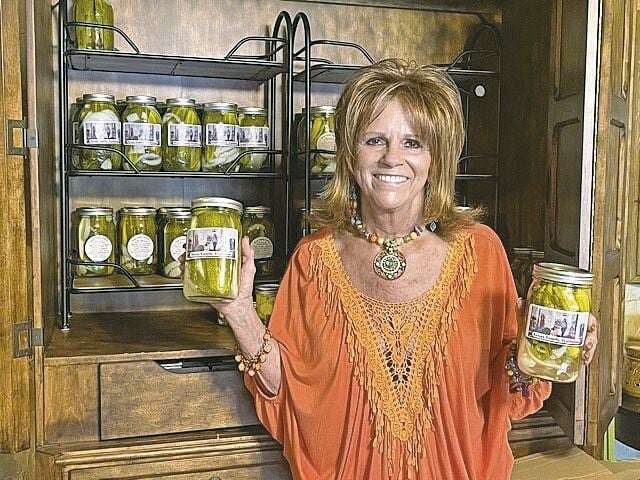 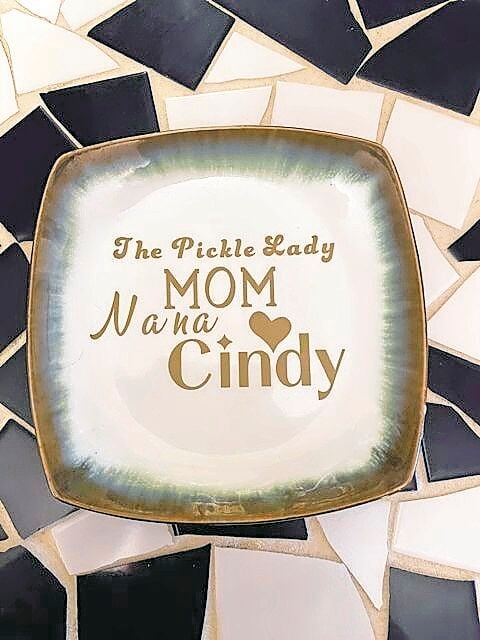 PICKLE EXPERT: Cindy Dennis said she has pickled "everything," like eggs, okra, squash and asparagus. "I'll pickle everything except, ya know, pound-cake," she said, with a laugh. 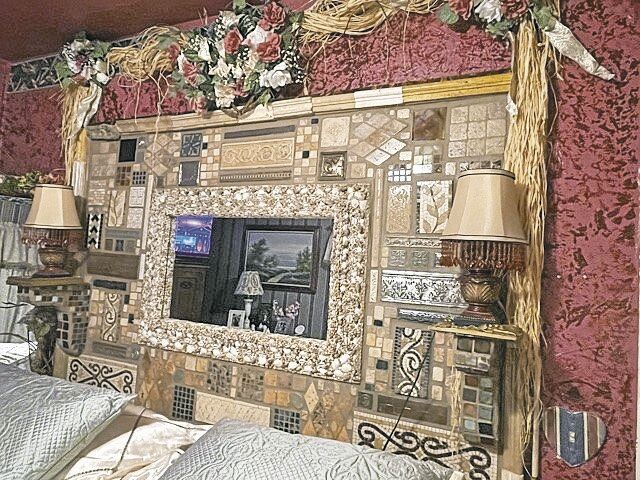 HOUSE OF CRAFTS: Every square inch of Cindy Dennis' home has been touched with her creativity. Even her bed frame is decorated with tile that she made herself.

PICKLE EXPERT: Cindy Dennis said she has pickled "everything," like eggs, okra, squash and asparagus. "I'll pickle everything except, ya know, pound-cake," she said, with a laugh.

HOUSE OF CRAFTS: Every square inch of Cindy Dennis' home has been touched with her creativity. Even her bed frame is decorated with tile that she made herself.

Granbury resident Cindy Dennis is known around Texas as “The Pickle Lady,” earning the nickname by creating her own unique, hot dill pickles that are loved by most everyone — except herself, that is.

The 73-year-old “Pickle Lady” — who has earned more than 30 blue ribbons from the State Fair of Texas — does not like pickles.

But that hasn’t stopped her.

Dennis has continued to gain more customers and “groupies” each year who have fallen in love with her pickles and other pickled products.

“I’ve pickled everything — eggs, okra, squash, asparagus... I'll pickle everything except, you know, poundcake,” she said, with a laugh.

Dennis’ pickles have gained so much traction that she was even featured on the TV show, “Texas Country Reporter,” with host Bob Phillips in 2018.

“There's four things that go (in) the bottom of the jar — garlic, onions, jalapeno peppers and fresh dill,” she said. “After I put the whole pickles in there, I just start cutting up pickles and I put little bitty chunks of the pickles on top.”

She originally got the pickle recipe from her mom, whose friend gave it to her in the 1970s.

“We had a pickle party because all my friends loved all the pickles and we were washing the cucumbers outside in a baby swimming pool,” Dennis said.

In 2009, she took over the pickle tradition completely, continuing to host pickle parties every year for the next 10 years.

“My daughter said, ‘Mom, why don't you enter them in the State Fair?’ My husband got on the computer, and he said, ‘Listen, this is the last day that you can enter.’ He filled out the papers on it and I entered them; that's the first year I won,” Dennis said.

Since then, Dennis has won every year (except in 2016 when she didn’t enter the State Fair due to surgeries), accumulating 35 blue ribbons in total — but not every ribbon was awarded for her pickles.

The first blue ribbon Dennis ever earned from the State Fair of Texas was for her “That’s Me” dolls — unique dolls that are superimposed with the facial image of an actual person.

“I put real people’s faces on dolls,” she said. “One day this lady called me, and she said, ‘I was wondering if you could make two dolls for me.’ I said, ‘Well, ma’am, right now I’m really really busy. I can make it after Christmas.’ She said, ‘Well my goddaughter is LeeAnn Rimes,’ and I went, ‘Done.’”

Dennis told Rimes’ godmother that all she wanted was a picture of Rimes with her “That’s Me” doll, and Dennis was not disappointed.

“He took it home with him. His mother told me that,” Dennis said.

Dennis’ home is filled with crafts, art and homemade designs that she has made herself.

The walls in her home are made with paper sacks, her kitchen sink is decorated with blue and white pebbles and she has a pond outside that was built in the shape of a heart.

“I did this whole house. It’s just what I do,” she said. “I love doing stuff like this that tells a story.”

Above the doorway to the kitchen sits a landscape painting of different houses, trees, teddy bears, Elvis memorabilia and more that collectively tell the story of the Dennis family.

“My son-in-law is a police officer so there’s a police car. I was an Elvis fan, and my husband played the guitar. All of this represents our family,” Dennis said.

Adjacent to that wall features a stained-glass peacock artwork that also earned Dennis a blue ribbon from the State Fair. To the left is a rainbow painted on the wall that is dedicated to her daughter.

“My daughter and I were sitting in a parking lot and we saw a rainbow and I said, ‘Every time you see a rainbow, remember that I love you.’ So, then I had to paint it on the wall,” she said, when interviewed by the “Texas Country Reporter.”

Every room in Dennis’ house has been touched with her creativity.

“All you have to do is do it,” she added. “You know, find old things and make something out of it.”