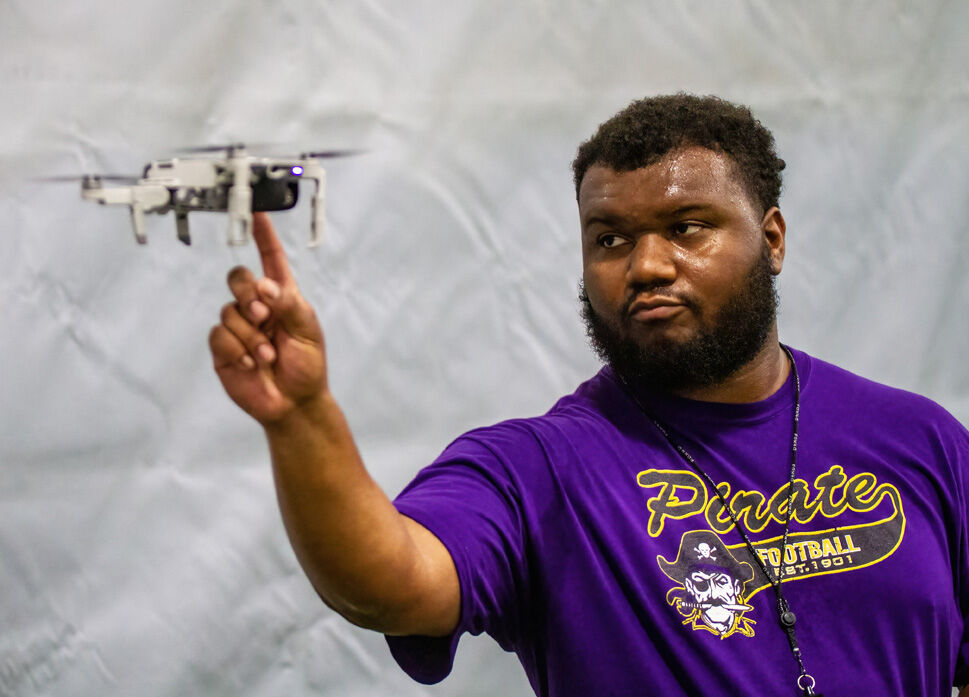 TECHNOLOGY: Coach Dondrei Williams, pictured using a photography and video drone, will be filling many roles this season with the Pirate football team. He has already impressed coaches and students alike with his video productions. 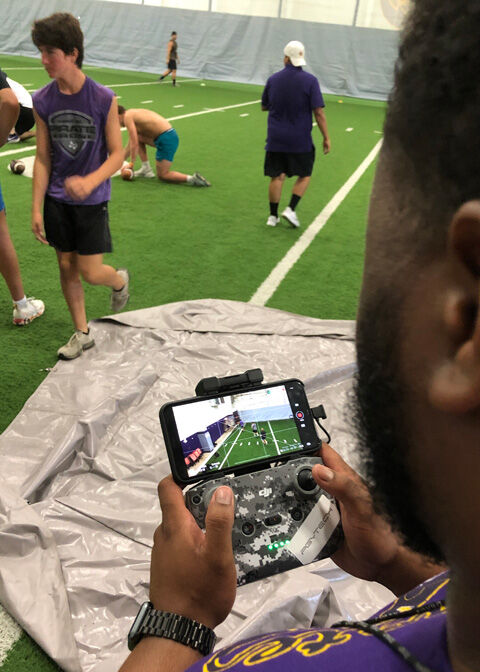 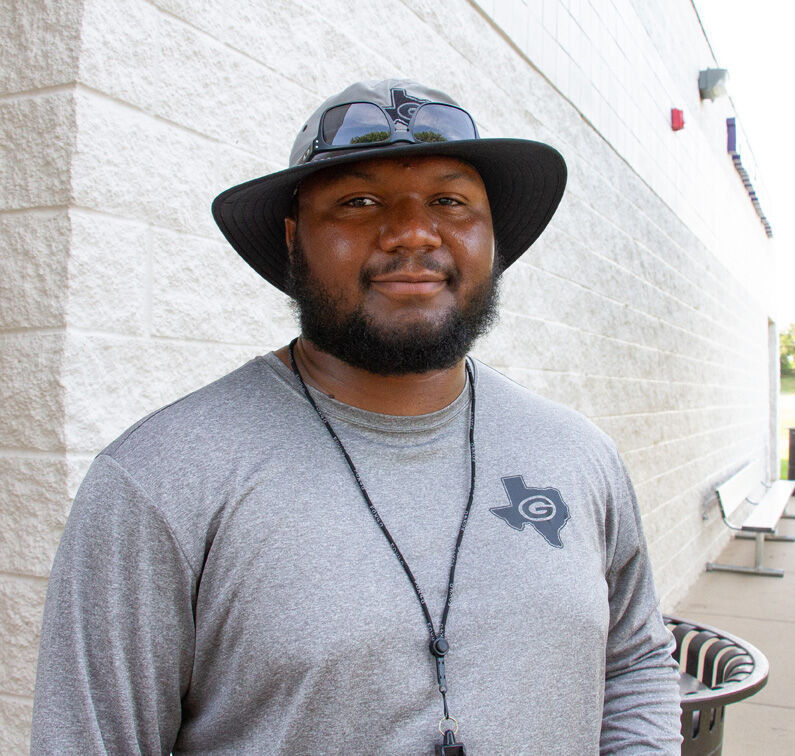 When four concussions ended his football playing career, coach Dondrei Williams faced some tough choices but was true to form, and he practiced what he preached. As he said, “You got to go get it.”

“Life is pretty much like football,” Williams said. “See the ball. Get the ball. You got to go get it.”

It’s a philosophy that works on the gridiron and in the classroom for Williams, who will be teaching Career and Technical Education (CTE) courses at Granbury High School this fall as he fits into what he does best, “role-playing.”

Role-playing wasn’t something the 6-0, 195-pound Williams was used to doing on the football field after being a dominant force for Hastings High School in Houston. He entertained several offers to play football at the collegiate level.

“Texas Southern made me an offer, and Sam Houston State wanted me as a preferred walk-on,” Williams said. “More than anything, it was coach Todd Whitten at Tarleton State University that made me want to be a Texan.”

In his third stint at Tarleton State, Whitten was busy rebuilding the Texan football program, and his honesty combined with a lack of bells-and-whistles promises appealed to Williams.

When he arrived as a fresh-faced freshman, Williams already had a reputation of being a helpful kind of guy. He was the recipient of District 23-6A’s Sportsmanship Award, in addition to volunteering for the Special Olympics and the Houston Food Bank.

One of Williams’ best attributes in college was his sense of responsibility and understanding others were counting on him. In three years of playing for Tarleton, Williams was only late one time to a weight lifting session.

That was a fact that didn’t escape the notice of Tarleton strength and conditioning coach Rod Cole.

“Dondrei is a great worker, and I loved having him in the weight room,” Cole said. “He was the kind of player you can pair up with another who didn’t know how to work hard. I think that was the ‘coach’ coming out in him early because he could teach other players to work hard, too.”

The hard work in the weight room was evident when Williams went from a 190-pound rock to a 235-pound bruising boulder between his freshmen and sophomore years.

While he was majoring in kinesiology, it was in the field of technology where Williams was shining. When Williams wasn’t busy finding a way to squeeze into a packed lineup, he was fixing the film room television, repairing a computer, or giving his coaches advice on their next technology purchase’s specs.

As he was working to break into a more significant role for the Texans, Williams kept himself busy in the classroom studying his way onto the Lone Star Conference’s honor roll.

The good grades kept coming as a “hammer-time” running back — and so did the concussions.

Leaving the football field behind would mean his athletic scholarship would also go away, and Williams would need to find another way to help pay for school.

McDonald’s was one solution, and because of his technical skills, Williams was also repairing iPhone screens on the side. One day, he fixed an iPhone for someone with an “in” at the Tarleton IT department. Before he knew it he was interviewing for a second job, which he also landed.

It was working in technology at Tarleton that Williams began to network. People outside of the Texan football program that people began to realize he was a “go-getter” with multiple skill sets that included more than just fixing iPhones.

Williams started his student teaching at Henderson Junior High School in Stephenville. The school was working toward keeping him there on its staff when Dublin High School head coach Bob Cervetto gave Williams a call.

“Coach Cervetto wanted to interview me to come to be a part of his program, and after meeting him, I knew he was special,” Williams said. “He was a little older, but the man was into everything and jumping into it all. He set a great example.”

Williams took the example to heart in everything he did in Dublin — especially in the classroom, where students were learning to edit and shoot video, create graphics and prepare themselves for college careers in technology.

“Coach Williams is a go-getter and one of the hardest working young men I have had the opportunity to be around,” Cervetto said. “Granbury doesn’t know how lucky they are, but I bet they are going to find out soon.”

When Cervetto announced his retirement last year, Williams had a choice to make. His girlfriend, Kameryn Griffith, a student-teacher in Acton, told him about a job up the road about 45 miles from Dublin, suggesting he apply for an open position in Granbury.

“I interviewed at around 9 a.m. and was at coach Cervetto’s retirement party cutting the cake when I got a call the same day with a job offer at around 3 p.m.,” Williams said.

True to his reputation as a “go-getter,” Williams has wasted little time in showing students the ins and outs of producing videos. This school year, GHS will feature live streaming broadcasts of football and basketball. Students have already created a virtual tour of Granbury High School, which debuted last week online along with a video highlighting the strength and conditioning training over the summer.

The conditioning video shows how students will be learning several different ways to film sporting events. The 100-yard sprint by Granbury’s athletes while viewed from above, is reminiscent of battle scenes from cable television spectaculars like “Game of Thrones” and “Vikings.”

“Our students are going to learn how to produce high-quality content this year, and with our plans to live-stream the games, my goal is to have a total production,” Williams said.

Williams has plans to stick around the Granbury school district, but one day would like to return to Houston as a head coach or offensive coordinator.

“That’s home for me and where my parents (Diangela and Kevin Kindrid) live,” Williams said. “Before that happens, I still have a lot to learn because I see the football field from a running back’s perspective.”

To learn more, Williams will role-play in his coaching duties with the Pirate football team. He will work with running backs, quarterbacks, H-backs, tight ends and receivers.

“Coach Williams will take our athletic program to a whole new level from a videography standpoint,” GHS head football coach Chad Zeschiesche said. “His ability to use a drone and produce quality videos allows us to promote our programs and our student-athletes at a much higher level. We are proud to have him both on our coaching staff and our CTE staff.”

Check out the videos already online promoting the Granbury ISD.

GRANBURY STRENGTH AND CONDITIONING WEEK ONE