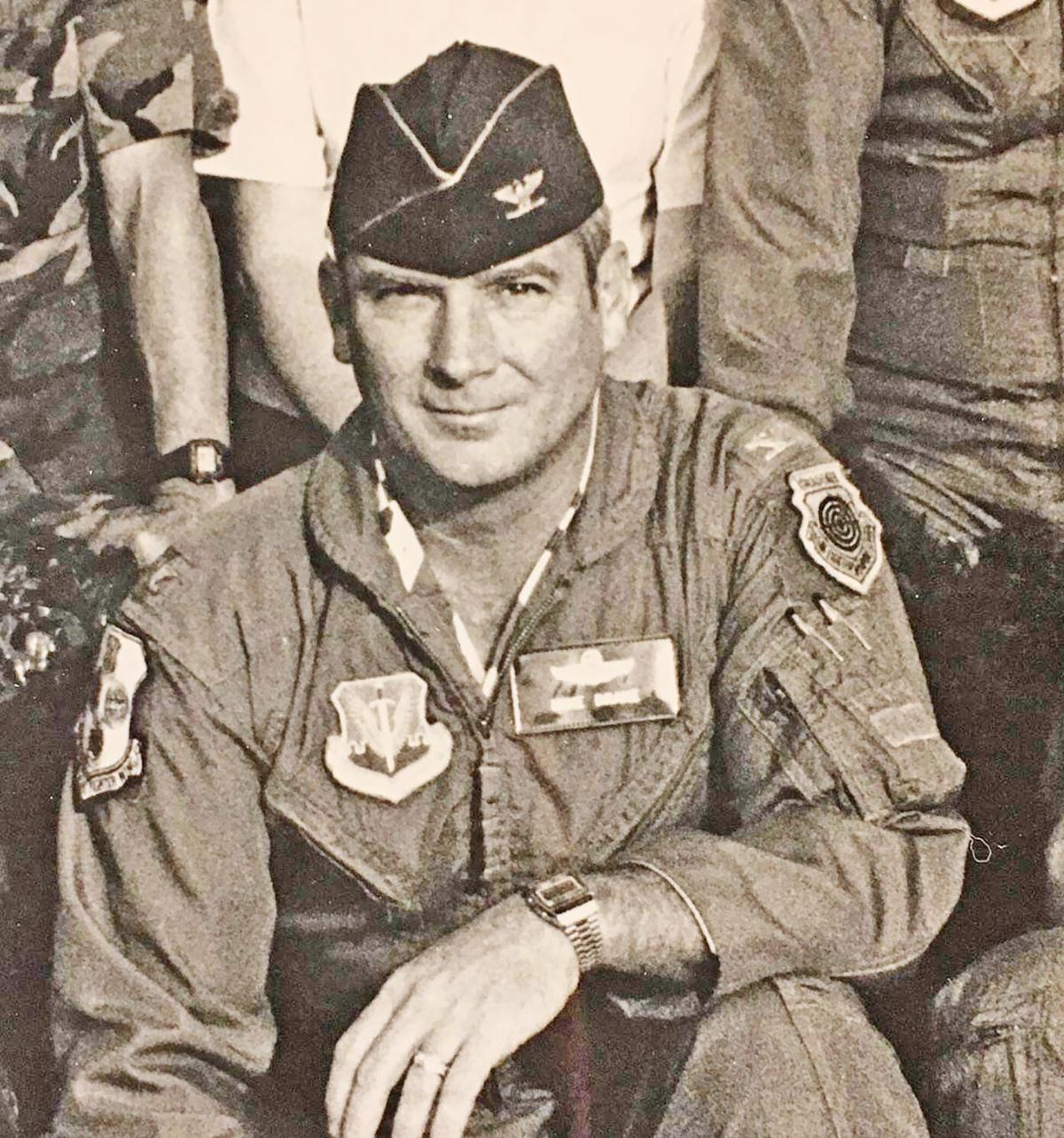 “SPEED BRAKE”: Colonel Michael Brake’s call sign was “Speed” in the Air Force, which correlated well with the airplanes that he flew like the F-4 and the F-16, the latter of which can top speeds of up to 1,200 miles per hour. 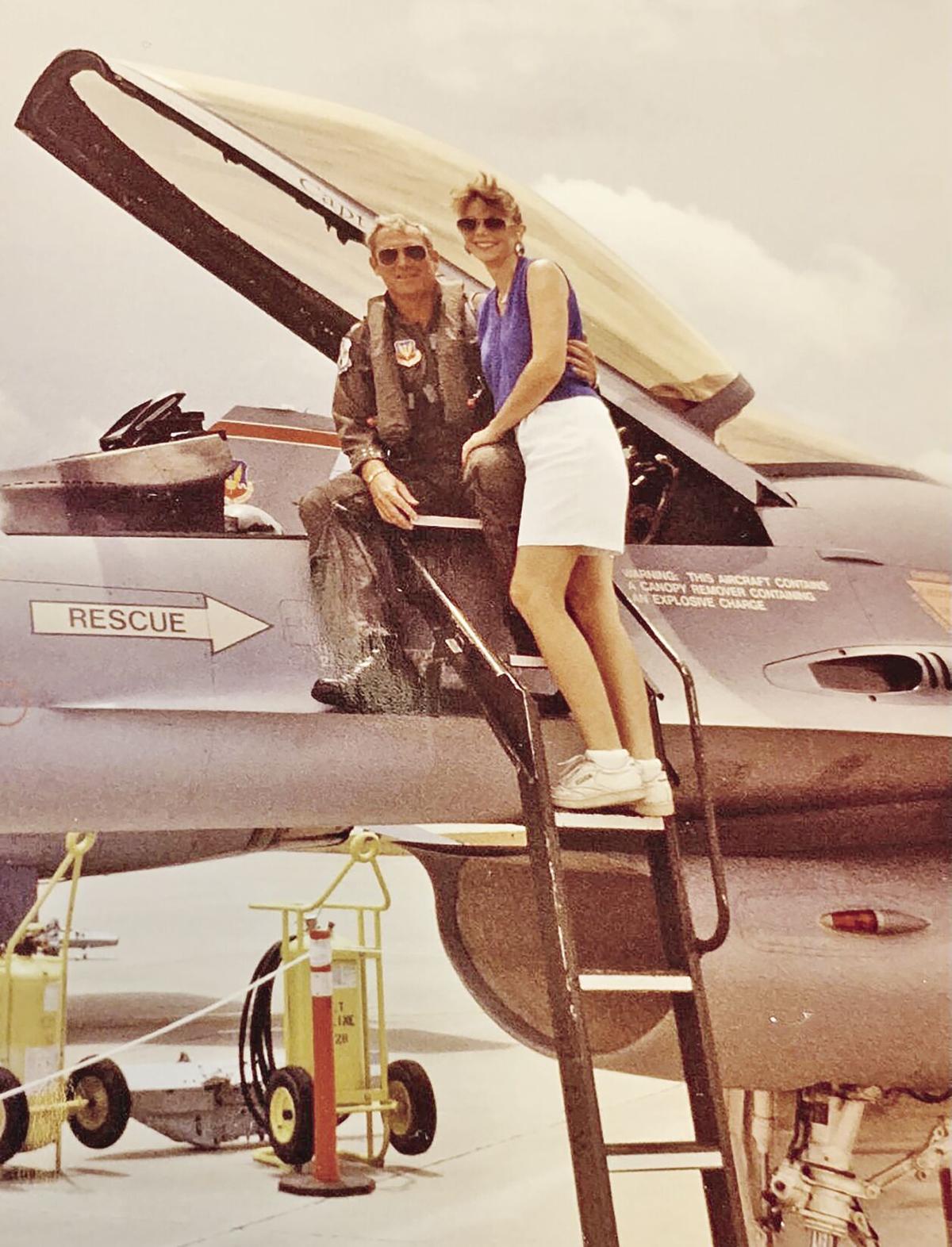 TRUE LOVE: Michael Brake said one of the most difficult challenges of being in the Air Force is the separation from family. He gives credit to his wife of 35 years, Dana, who is pictured with Brake, for sticking by him during his time in service. 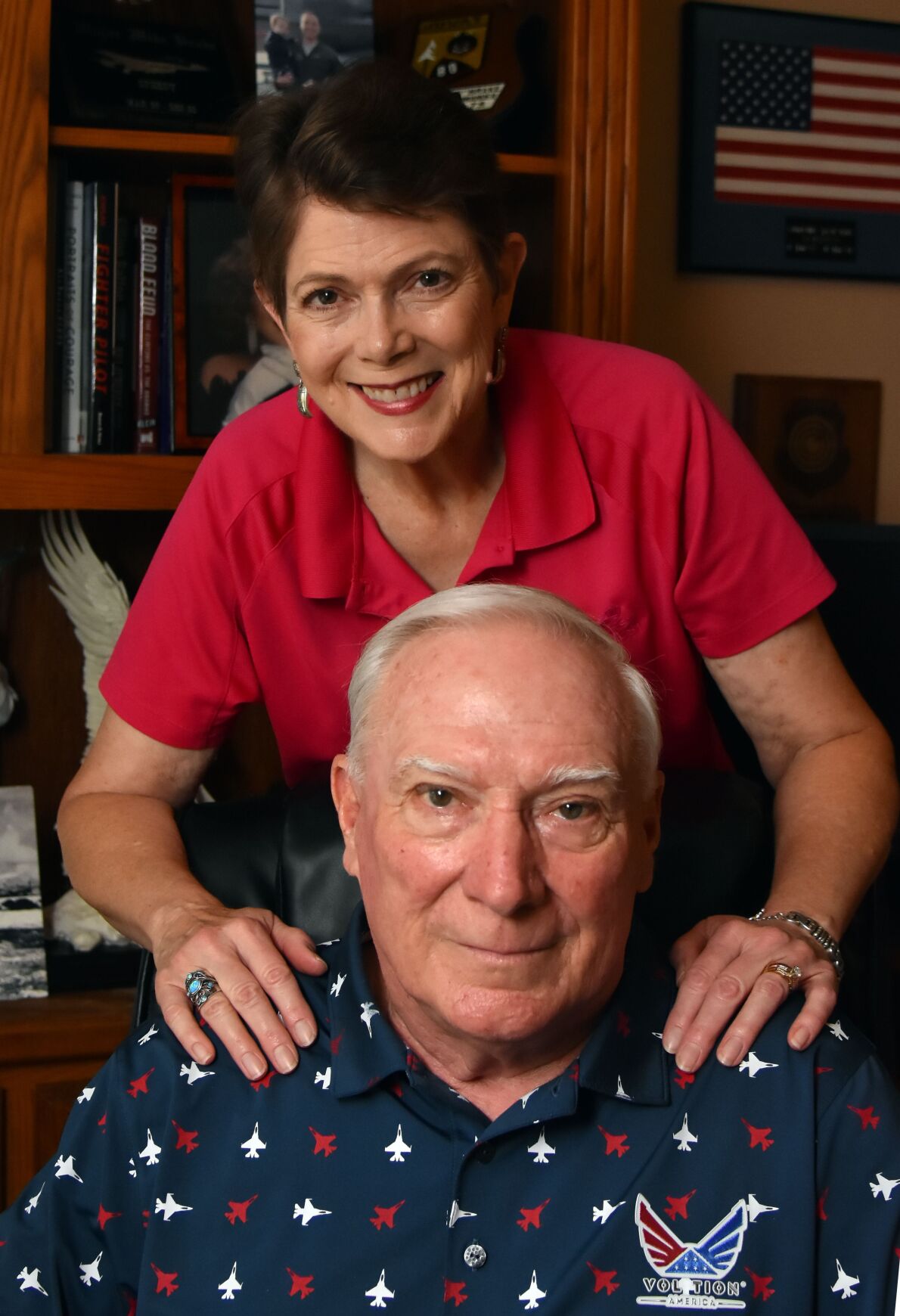 35 YEARS TOGETHER: Michael Brake is pictured with his wife, Dana at their home in Pecan Plantation. 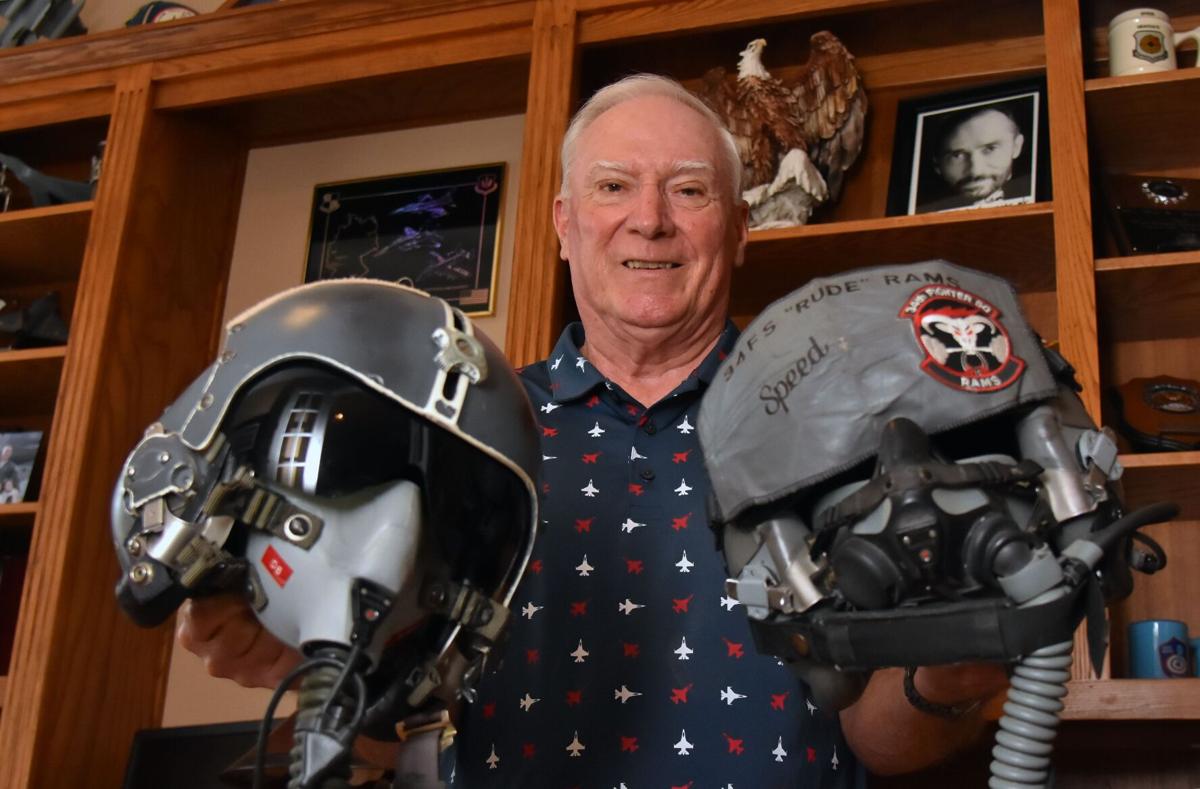 FOREVER A PILOT: Brake still has his two pilot helmets from the Air Force. His call sign "Speed" can be seen displayed on one of the helmets.

“SPEED BRAKE”: Colonel Michael Brake’s call sign was “Speed” in the Air Force, which correlated well with the airplanes that he flew like the F-4 and the F-16, the latter of which can top speeds of up to 1,200 miles per hour.

TRUE LOVE: Michael Brake said one of the most difficult challenges of being in the Air Force is the separation from family. He gives credit to his wife of 35 years, Dana, who is pictured with Brake, for sticking by him during his time in service.

35 YEARS TOGETHER: Michael Brake is pictured with his wife, Dana at their home in Pecan Plantation.

FOREVER A PILOT: Brake still has his two pilot helmets from the Air Force. His call sign "Speed" can be seen displayed on one of the helmets.

Sometimes a certain career just calls to you and you get that gut feeling — a sense that this is what you’re meant to do for the rest of your life.

Pecan Plantation resident and former Air Force pilot Michael Brake experienced that feeling when he got his first taste of flying an airplane at the age of 21.

As luck would have it, he was allowed to get back into the ROTC program at the tail end of the first semester of his junior year at Grove City College in Pennsylvania — further proving that this was Brake’s destiny.

“It (ROTC) was mandatory for men for the first two years, and then after that, it was an elective. if you were going to stay in the ROTC program, then you could earn a commission if you stayed for the last three years,” Brake said. “After the first two years, I wanted to get out and be an engineer. Well, I won Selective Service lottery in 1969, so I went back to the professor of aerospace studies at the college in November. We were halfway through the semester of my junior year.

Brake obtained a degree in engineering and received an Air Force commission. He remembers being absolutely nervous when he was signing his contract to begin his service.

Reminiscing, he said, “I remember that contract was for six years — five years, plus the one year that I was going to be in pilot training — and when you're a 21-year-old kid, signing a contract for six years, that's almost like a third of your life. I could barely write my name I was so nervous. Like, do I really want to do this?"

But Brake had nothing to worry about, as he spent 27 years in the Air Force and “enjoyed every minute of it.”

He started out flying the F-4 Phantom, a “top line fighter,” and he did that for nine years before checking out of the F-16 in 1980.

“That (the F-16) was a marvelous, marvelous airplane,” Brake said. “I call the F-4 the F-150 of fighters. It was a big, fast, ugly, tough airplane. And the F-16 was a Ferrari, just a really, really neat airplane to fly. I flew that airplane for the next 18 years. It was a beautiful, wonderful machine.”

However, with flying the F-16 plane, Brake ran into some challenges, especially since the plane was a single-seater.

"The F-4 was a two-seater plane and we had a GIB, guy in back, who was a weapon systems officer, so we got to do this stick and rudder stuff up front and hit the pickle button for the bombs to fall off and the trigger for the gun to shoot out missiles, but he did a lot of the work in the backseat, finding the targets, running the radar,” he said. “Now, when you're in a single seater airplane, you have to do it all by yourself. It gets really busy. I've been in missions that we had 120-150 airplanes all going the same way to do a mission so it gets to be fairly complicated.”

Brake’s call sign — a specialized form of nickname that is used as a substitute for the aviator's given name — was Speed, which fits with the F-16 that he piloted as the top speed goes up to 1,200 miles per hour.

He said one major challenge of the F-16 is that it’s a “very high-G airplane,” which means that it has high levels of acceleration.

“You can put a lot of stress on your body very, very rapidly,” Brake said. “We've lost airplanes to what is known as G-induced loss of consciousness. The pilot would actually put the airplane in a hard turn so that all the blood goes out of your head and you pass out. The time that you're out is enough for the airplane to go uncontrollable and hit the ground.”

Brake said if pilots are traveling at 10,000 feet above the ground, going 600 miles per hour, it could take as little as 10 seconds for the plane to hit the ground if a pilot loses consciousness while flying.

"One of the other problems with G-induced loss of consciousness is when you wake up, you are really really disoriented. You know, it's like if you've ever been knocked out. You don't even know where you're at,” he said. “It happened to me one time and I was not flying the airplane; I was riding in the backseat and didn't plug my G-suit in.”

A G-suit is designed to prevent a pilot from blacking out and is similar to a pair of chaps.

The pressure around the muscles helps prevent blood from pooling in the feet and legs and helps to push blood back up to the heart and brain, according to oiresource.com.

Because the F-16 plane is a “high performance,” aircraft, Brake recommends for pilots to be physically and mentally ready to fly every time they get in the air.

"It's really important that you keep your mind clear and keep focused on what you're doing all of the time,” he said.

He said one of the most difficult challenges of being in the Air Force is the separation from family, and gives credit to his wife of 35 years, Dana, for sticking by him during his time in service.

“We as veterans, the ladies that are with us and stayed with us through our careers are very, very special people,” Brake said. “The support that my wife gave me through my career, it was just incredible. I did way better than I deserve.”

Although his time away from his family was difficult, Brake managed to stay in the Air Force for 27 years, because lighting the burner on the fighter planes was too exhilarating to give up.

“When you’re on the runway, you light the ‘burner,’ it kicks you in the butt and you're going to be airborne in less than five seconds, that's the biggest thrill,” he said. “I just live for that; the power, the performance, it's so exhilarating, so exciting. Everybody has something. That's my adrenaline rush.”

One memorable moment that sticks with Brake was when he was the operations manager and commander of the F-16 Fighter Weapons School at Nellis Air Force Base in Nevada.

"You teach graduate level tactics and flying capability to individuals to make them instructors and they go back to the unit. Then they teach the unit ... everything that they know,” he said. “It was the most rewarding and satisfying thing I'd ever done.”

Brake retired from the Air Force in 1998 with 1,900 hours in the F-4 and 2,100 hours in the F-16 — and he still didn’t stop flying. That same year, Brake went to work for Southwest Airlines and spent 16 years flying as a first officer and captain.

“I had a couple of friends who worked for me at Nellis who were flying for Southwest Airlines, so I called them on the phone and I said, ‘Give me the truth. Tell me what you think about what you're doing.’ They go, ‘Speed Brake, this is the best retirement job on the planet,’ so I applied and got hired,” he said.

After Brake retired from Southwest Airlines in 2014, he assumed he was finally done flying after a 47-year career. However, a year later, a good friend of his had an RV-6 airplane and asked Brake if he wanted to go flying.

“We had been airborne about 15 minutes before I leaned over, looked at him and went, ‘How much does one of these cost?’ So, I bought one. That’s kind of the end of the story,” Brake said, chuckling.

Even now, at 73, Brake still flies regularly, attempts to play golf on occasion and spends time with his wife, Dana, at their home in Pecan Plantation.