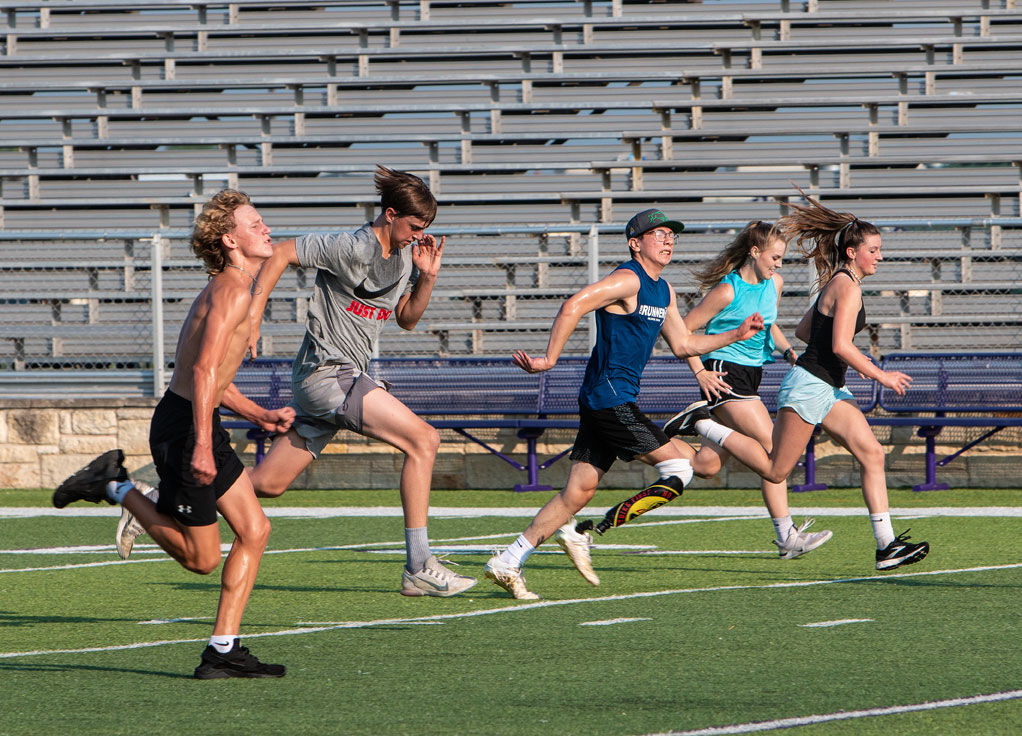 RUNNING WITH THE PACK: Jack Hernandez runs with the pack during strength and conditioning camp at Granbury High school. 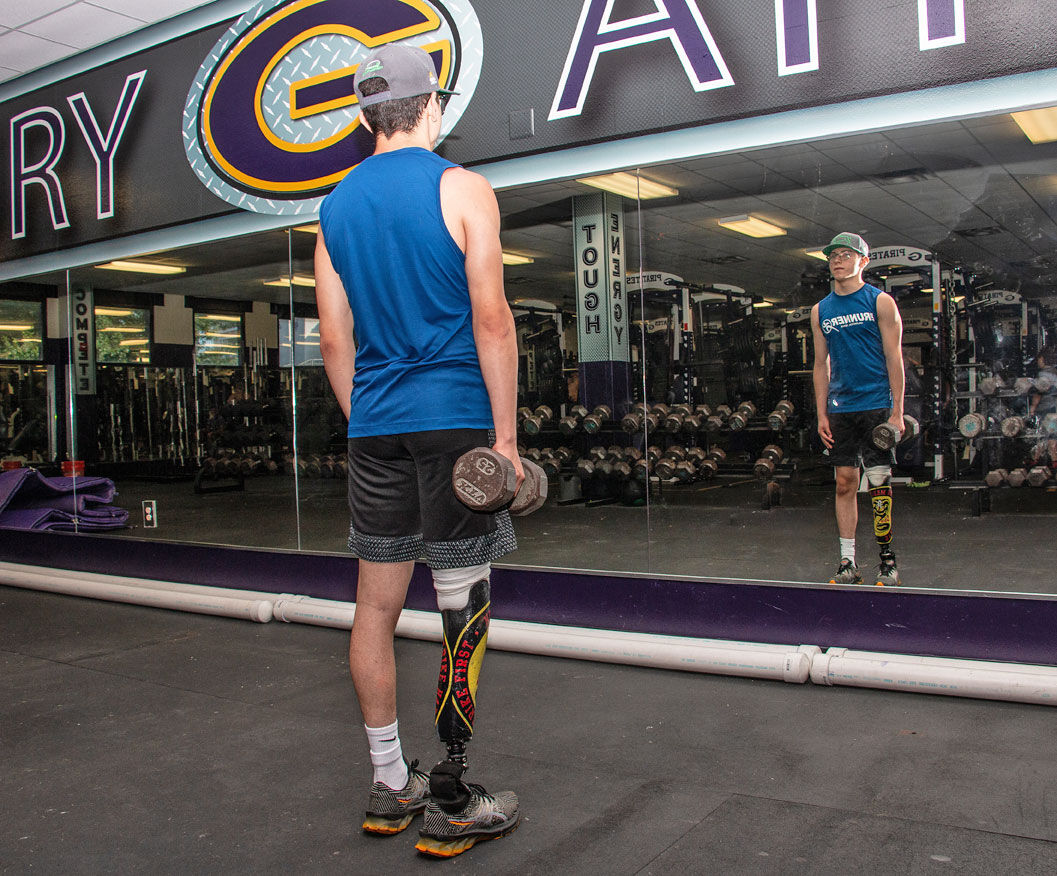 REFLECTING: Jack Hernandez has had plenty of time to reflect on the things that have happened to him, and he has chosen to rise above it all. 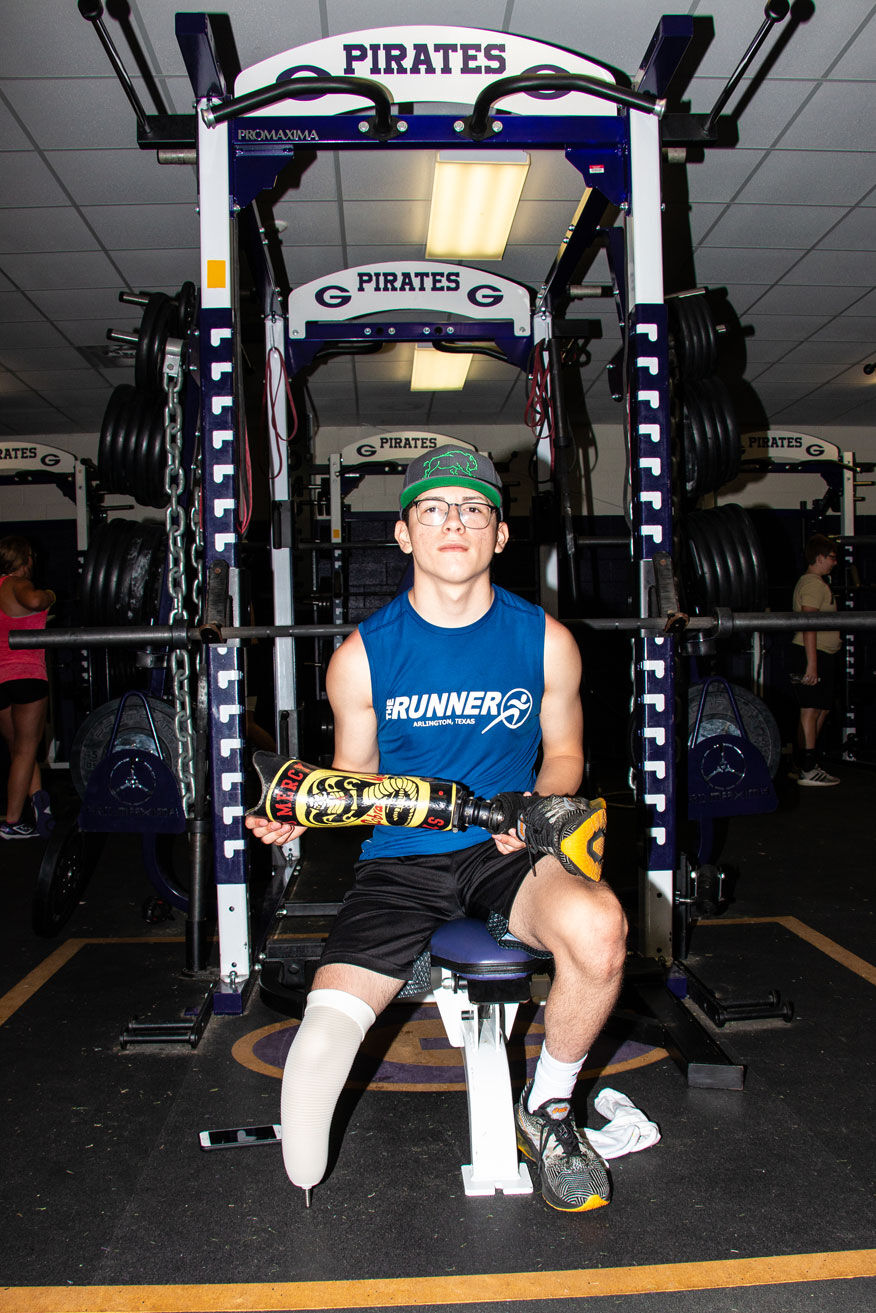 A PART OF HIM: After losing part of his right leg, Hernandez learned to walk again and went from being right-foot dominant to left-foot. 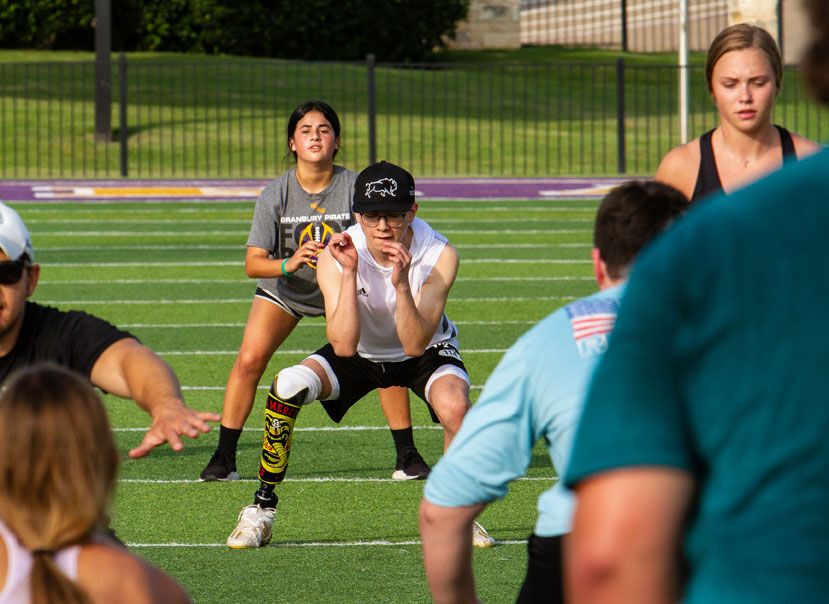 KEEPING BALANCE: Sometimes, things like a simple squat can prove challenging for Hernandez because his prosthetic leg is always under tension.

Granbury High School freshman Jack Hernandez blends into the crowd, and that’s just how he likes it.

Hernandez is a football and soccer hopeful, and despite missing the bottom portion of his right leg, he is more than just a prospect.

“I hope to one day be a first-team all-district player,” Hernandez said. “Being a first-teamer in soccer and football are definitely among my goals.”

It’s a big switch from when he struggled following a lawnmower injury when he was five years old.

“My brother was driving a riding lawnmower, and he stopped,” Hernandez said. “He didn’t know I jumped off the back, and he backed it up.”

The mower was older and not equipped with an automatic shut-off. The damage to Jack’s leg was devastating, and a journey he never expected to take had begun.

“I didn’t think that I would ever walk again,” Jack said as he remembered the struggles early on with his new right leg.

Even when he learned to walk, there was and still is a constant struggle for balance. His prosthetic leg won’t allow him to squat and keep his foot flat without continuous pressure.

There were other types of pressure, too, and some of it was harder to overcome. Children will be children, and sometimes their innocence in asking a question about his leg was hurtful. Purposeful bullying comments were even worse.

“People would say things behind my back, or they would say it where I could hear them. It made me angry,” Hernandez said.

Despite scoring his first soccer goal at six years old and excelling in sports like football, jujitsu, basketball, track, and boxing, some doubted his abilities.

As he grew older and with the help of his family and others, Hernandez began to realize that when he reacted to such comments, he was playing right into the hands of his tormentors.

Hernandez uses sports as a coping mechanism, and now he is eager to prove doubters wrong. He is also happy to see that the culture of bullying in schools has taken a 180-degree turn.

“Sports are an excellent coping mechanism for me,” Hernandez said. “I have created goals for myself that I believe I can achieve.”

Sometimes the struggles associated with having a prosthetic leg are physical and mechanical.

“I was playing in one football game where my leg would pop off every time I made a tackle,” Hernandez said. “After the play was over, I would have to put it back on.”

Ideally, a metal rod sticks from a padded sock at the end of his leg, fits it the prosthetic, and then snaps into place.

As Hernandez grows, the inside of the leg is sanded down to keep him balanced. Every two years, he is fitted for a new one.

In a way, the theme of his different legs has kind of described his journey to the present. One leg had the Angry Birds theme, and another was camouflaged – now he wears one themed “Cobra Kai” of Karate Kid fame.

“Strike first. Strike Hard. No Mercy,” Hernandez said. “I like the true philosophy of that — not how they try to portray its bad side on television. I like it because I can apply it to sports.”

As someone who has overcome a disability, Hernandez does have some advice for those who may find themselves in his circumstances.

“Don’t worry about tomorrow. Concentrate on today,” Hernandez. “Just because you fail today doesn’t mean you will tomorrow. All of those days start to add up, and one day, you will recognize the progress you are making.”

As he heads into his freshman year, Hernandez wants to focus on soccer (striker) and football (receiver and cornerback) as his primary sports. Still, he’s not ruling out playing basketball either.

“I’m not the same person I was when I started,” Hernandez said. “I’m proud of who I am and of what I have accomplished. I can now make fun of myself or joke about it.”

Some of those jokes have included mentioning to a coach that he can’t “feel his right ankle” and that he needs some WD-40 to “loosen up.”

Along with his new outlook on life has come an admiration from his friends like Tony Debello.

“Jack is a guy who just keeps going until he beats you,” DeBello said. “He’s a good friend who is always willing to help you. Even when Jack is tired, he will give extra.”

While he has four years of high school in front of him, Hernandez has been leaning toward pursuing a career in the culinary arts.

Would Hernandez change anything if he could?

“I wouldn’t change a thing,” Hernandez said. “I found who I am and what’s left is for me to live my life.”