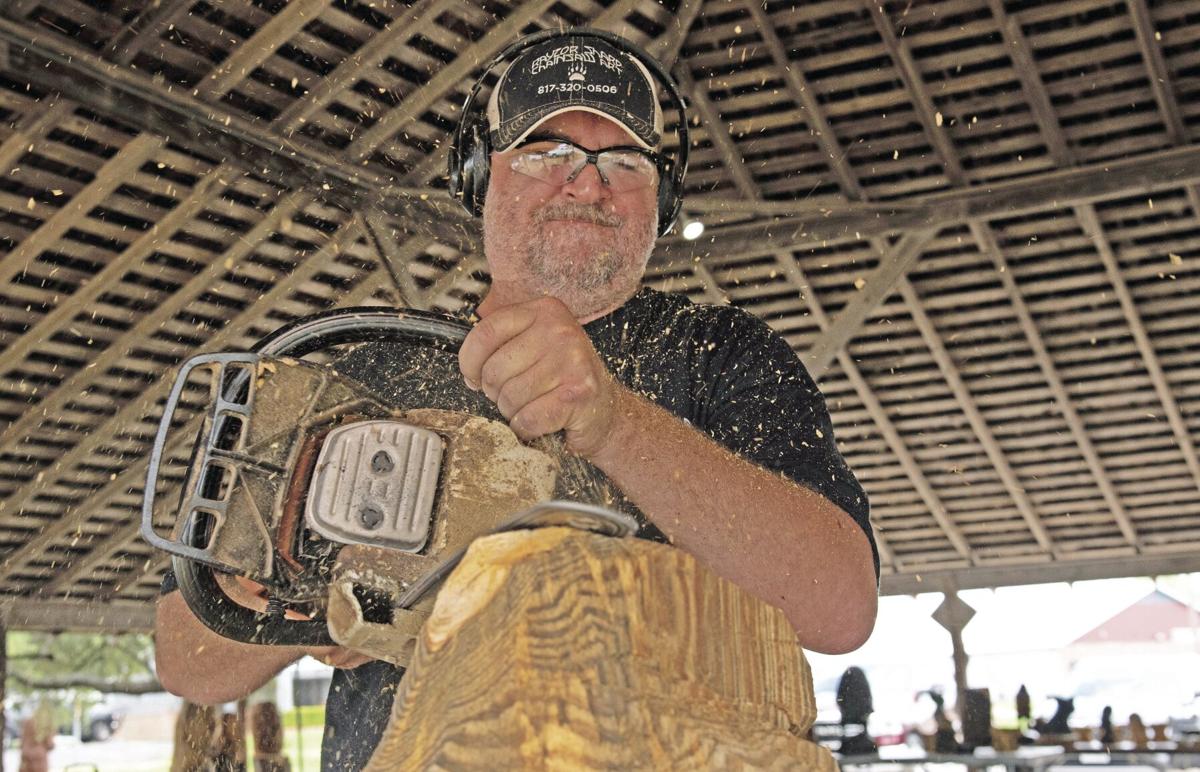 THE STUDENT HAS BECOME THE TEACHER: Granbury resident, Ray Banfield Jr., learned to make chainsaw carvings after a trip to Canada in 2016. Now, he hosts events in the area that allows others to learn. 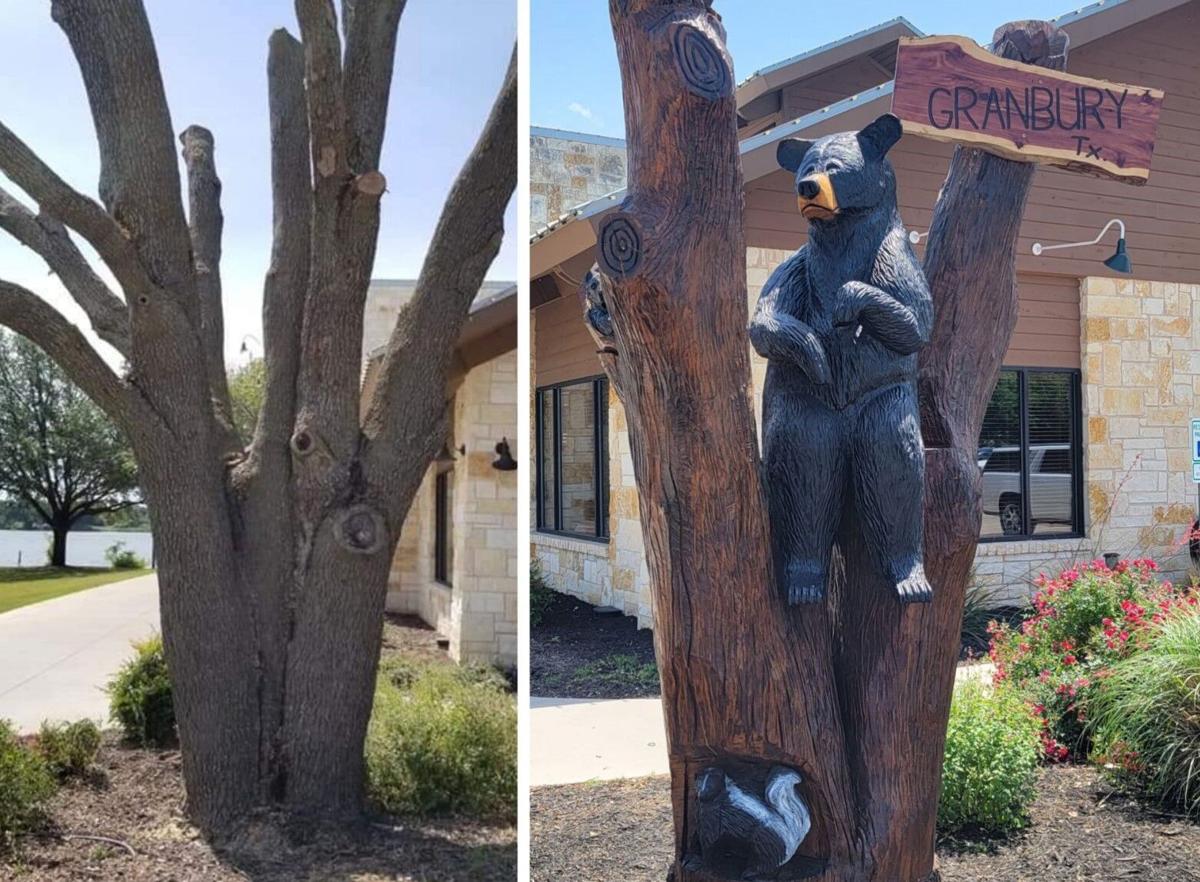 RELAXATION: Ray Banfield said he enjoys carving because it helps him relax. He's made more than 100 sculptures including this bear in a tree at Mesquite Pit Steaks and Bar-BQ in Granbury.

THE STUDENT HAS BECOME THE TEACHER: Granbury resident, Ray Banfield Jr., learned to make chainsaw carvings after a trip to Canada in 2016. Now, he hosts events in the area that allows others to learn.

RELAXATION: Ray Banfield said he enjoys carving because it helps him relax. He's made more than 100 sculptures including this bear in a tree at Mesquite Pit Steaks and Bar-BQ in Granbury.

For some people, practicing yoga or going for a run is a way to escape reality, but Granbury resident Ray Banfield Jr. unwinds by creating stunning wood carving sculptures — with his chainsaw.

“If you're doing a bear, 95% of it is going to be a chainsaw,” he said. “Then, you'll use the eye tool for the eyes and you might use some burr bits to round out the nose, put the nostrils in and the mouth, but 95% of it is just chainsaw.”

Banfield, 44, became interested in chainsaw carving in 2016, when he took a vacation to Washington state to see his son graduate. Banfield and his family took a cable car up to Grouse Mountain in Chelan (north central Washington) — and the rest is history.

“They had, like, almost 30 sculptures, 30 huge chainsaw carvings,” he said. “Canadian resident, Glenn Greensides, he spent eight months up on that mountain doing all of these. That just really stuck with me and intrigued me. I had seen chainsaw carvings at the fair and stuff like that, but when you stand in front of something that's 20-plus feet tall, 30 feet in the air and a guy to work on them with a chainsaw, it's pretty impressive.”

One day in 2018, Banfield decided to take a piece of an oak log and see what he could do. Thus, his first sculpture was born.

“I was going for a little bear. I mean, it’s a resemblance ... kind of bearish,” he said, chuckling. “I put sunglasses and a hat on him. He looks a lot better I think.”

Since then, Banfield has been perfecting his craft by sculpting foxes, eagles, sharks, bass, wolves, owls and dogs.

“Honestly, I don't really consider myself an artistic person, as I never was a drawer in school or in my childhood. I never really did any trainings or anything like that or sculpting,” he said. “After making him, (the bear) it pretty much set the bug.”

Banfield joined a few Facebook chainsaw carving groups to learn more and talk to people who shared a similar hobby and passion.

“I was trying to do something I haven't done before to try and challenge myself. Sometimes it comes out good and sometimes it don't,” he said, laughing.

Before he starts carving, Banfield prints out reference pictures he finds on the internet to give him an idea of what he wants his sculpture to look like.

“Since I've started this, I have started drawing a lot more at onsite jobs at people's houses,” he said. “They'll give me an idea, we'll come up with a theme and draw it out, and then we'll come to an agreement on it. The characters and the drawings, I'll grab some reference pictures of a black bear off the internet and print them out. I use little toy models too for muscle mass, structure and builds.”

He has carved more than 100 sculptures and only does that on the weekends. He has a full-time job in Fort Worth at Lockheed Martin, a global security and aerospace company where he’s worked for 19 years.

Banfield prefers softer woods like yellow pine and red cedar because they are durable and stand up to the elements. He said an average wood carving sculpture takes him two days to complete.

He recently finished a project for Mesquite Pit in Granbury that took him six days total to finish. The wood carving sculpture is positioned outside of the restaurant and features a black bear, a cub and a skunk surrounding a tree, complete with a “Granbury, TX” sign.

Banfield said he loves wood carving because it allows him to relax and escape to his “creativity world.”

“I put the headphones on and you're in your own little world; it's real relaxing,” he said. “It's kind of like my yoga. (I love) knowing that you're taking a raw material and you’re going to make something really really cool out of it.”

From Oct. 15-17, Banfield will rent out the Acton Tabernacle to host fellow chainsaw artists from out of town and out of state.

He said he plans to one day host a chainsaw carving event at the historic Granbury Square.

“I've got a bunch of approvals to go through, but I know it'll be huge because these guys do wonders with wood,” he added.