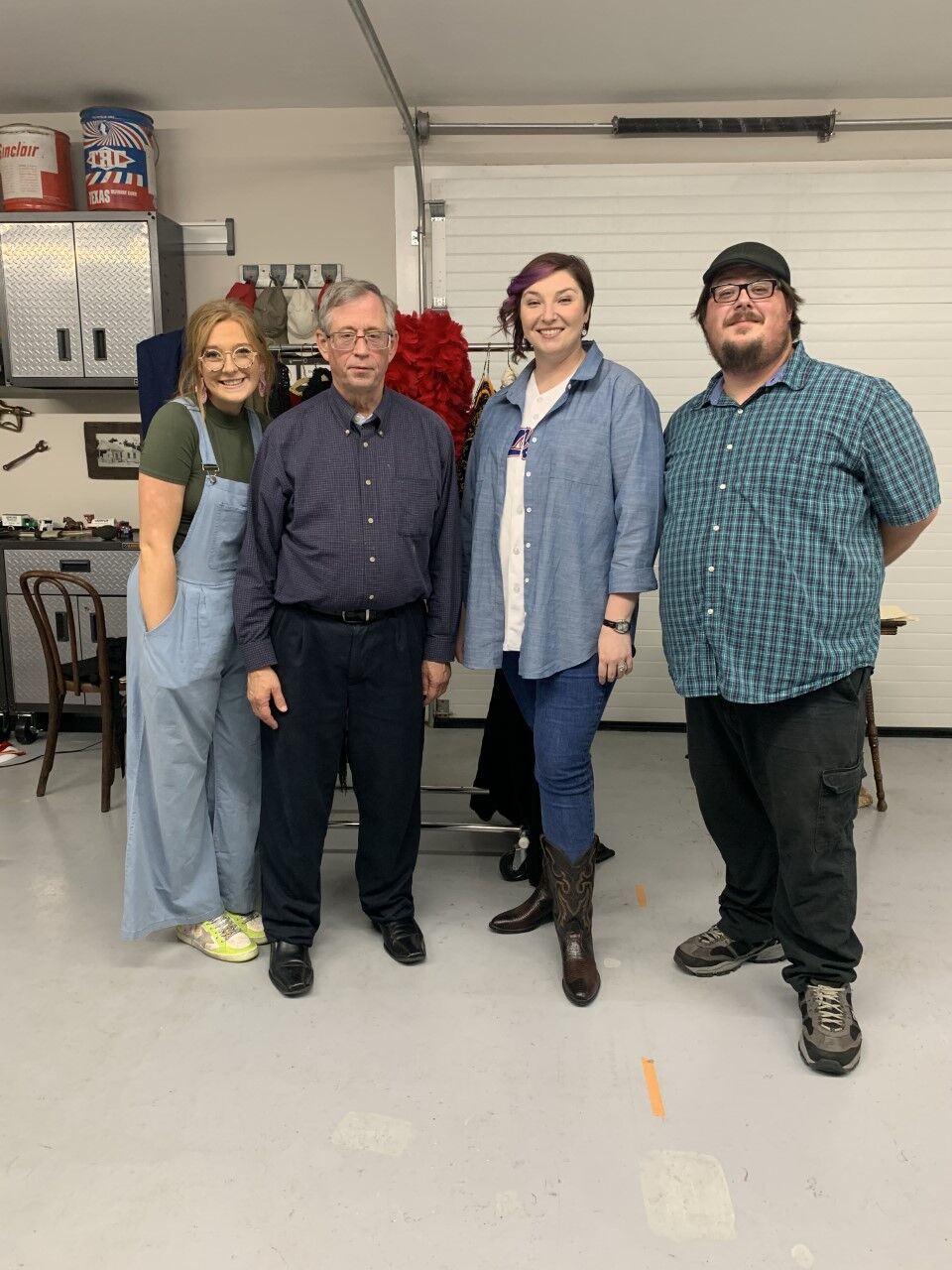 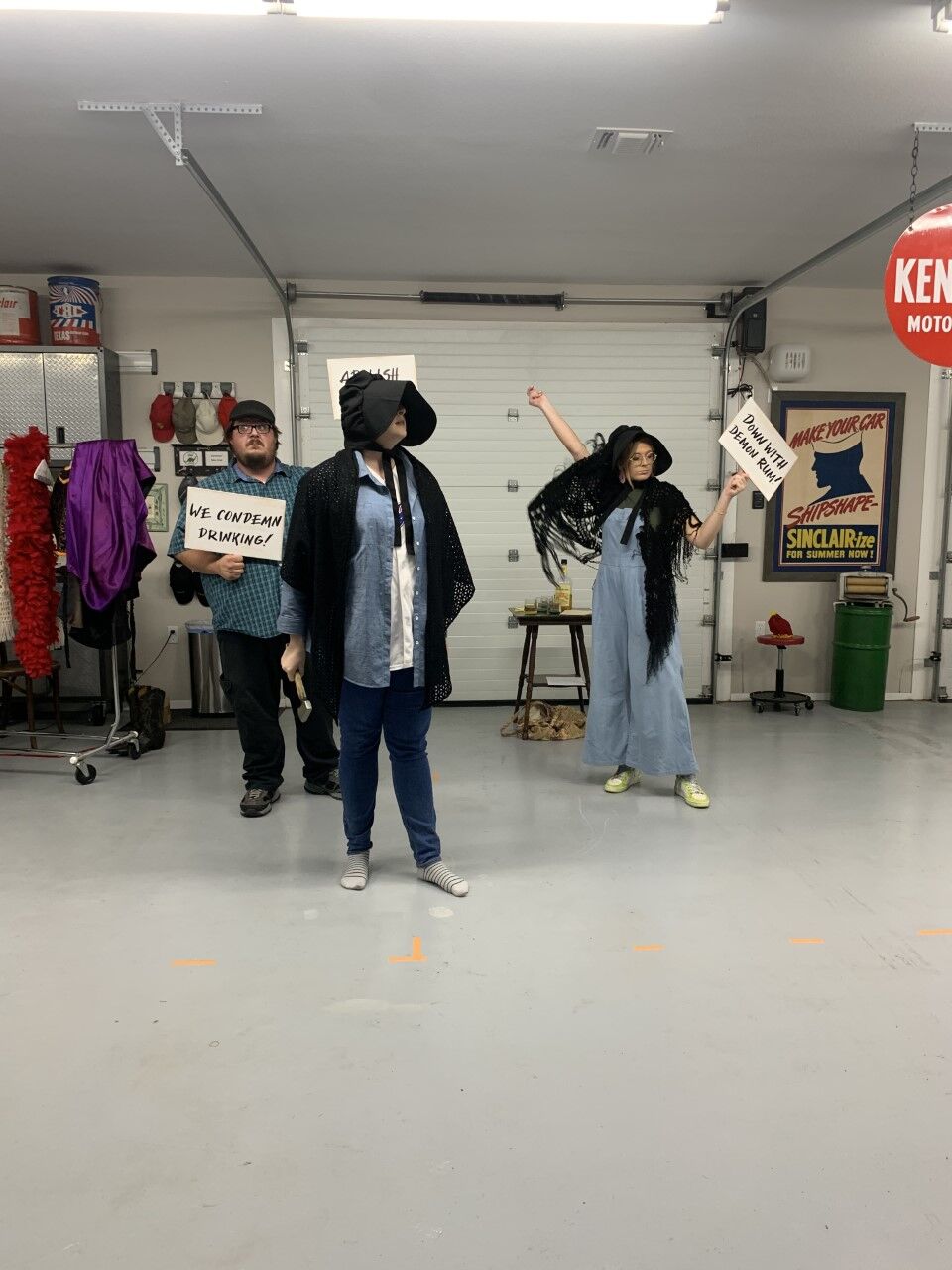 REHEARSAL UNDERWAY: Brian Lawson and Emmie Vaughan brandish signs with the phrases, “We condemn drinking!” and “Down with demon rum!” during Tuesday night’s rehearsal of “Granbury Follies.” 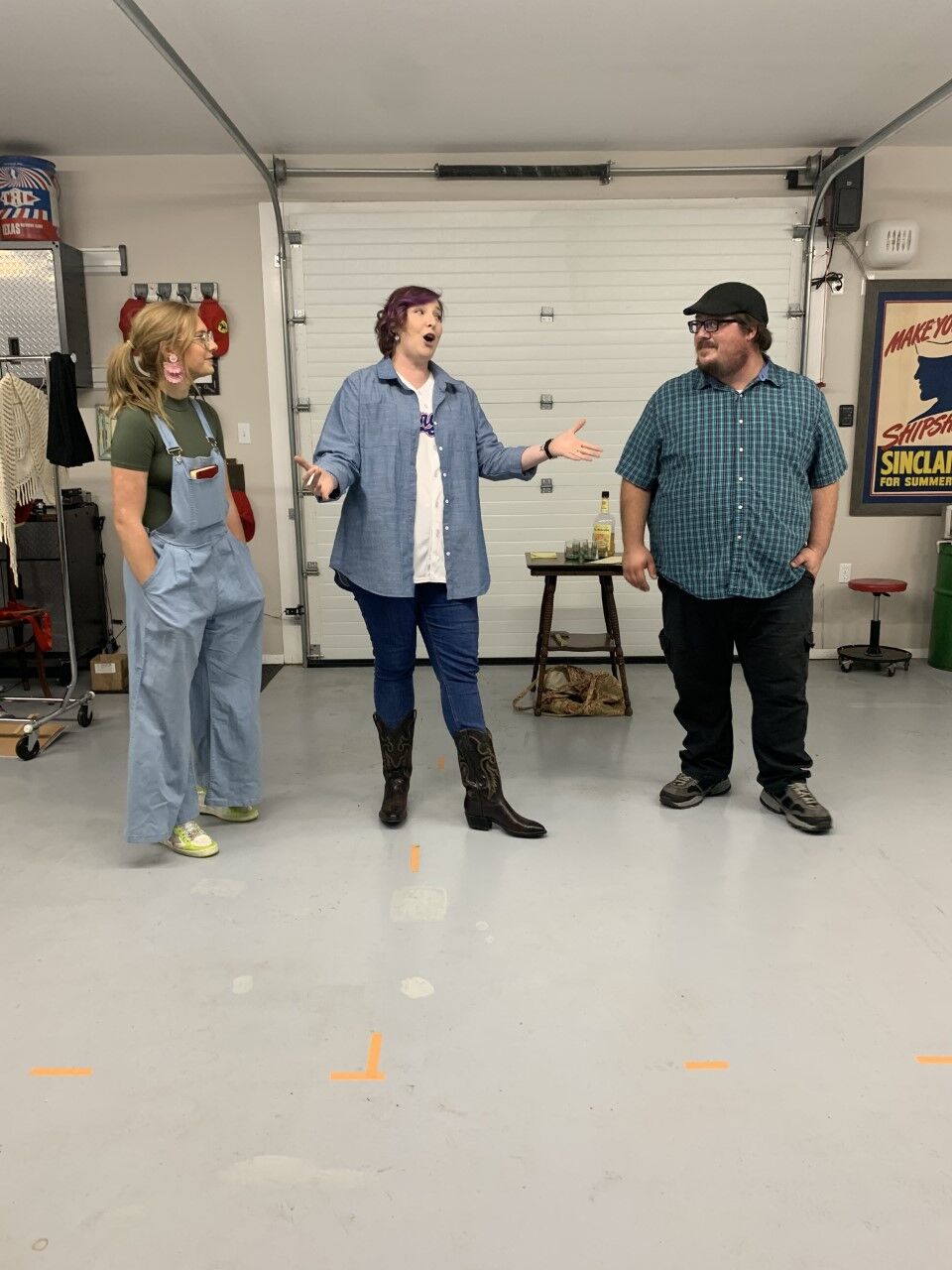 RETELLING HISTORY: Presented by the Bridge Street History Center, "Granbury Follies” tells the story of Jo Ann Miller, Joe Nutt and other community members as they work to save, restore and reopen the Granbury Opera House after it sat in ruin for almost half a century.

REHEARSAL UNDERWAY: Brian Lawson and Emmie Vaughan brandish signs with the phrases, “We condemn drinking!” and “Down with demon rum!” during Tuesday night’s rehearsal of “Granbury Follies.”

RETELLING HISTORY: Presented by the Bridge Street History Center, "Granbury Follies” tells the story of Jo Ann Miller, Joe Nutt and other community members as they work to save, restore and reopen the Granbury Opera House after it sat in ruin for almost half a century.

Presented by the Bridge Street History Center, the play tells the story of JoAnn Miller, Joe Nutt and other community members as they work to save, restore and reopen the Granbury Opera House after it sat in ruin for almost half a century.

“The play starts with an afternoon before rehearsal that evening,” said Phil Groeschel, director of the play. “Two actual historical figures, Jo Ann Miller, and Joe Nutt, are walking on stage and there's an intern named Kate and there's a piano player named Harry. Kate and Harry each kind of represent a different aspect of the Opera House. There were a lot of new, very young people who were brought in to be in production, and help in the technology side of the theater. Kate is a fictitious character, but she is embodying a lot of the issues that those people went through. Harry represents someone who had been involved in the theater one way or another for a very long time. He was kind of the guy that if things weren't working, you would just say, ‘Harry, go fix that.’ He was kind of the history of the building.”

Groeschel said even though Joe Nutt and Jo Ann Miller were real people, their characters in the play are still fantasy interpretations.

"We're not trying to replicate those people's personality and mannerisms, although we're working towards some suggestion of that, because there are many people in the audience who knew these people,” he said.

In fact, the costume designer, Drenda Lewis, worked for Miller when she was a teenager. Duncan McMahan, who plays Harry, actually accompanied Miller on the piano in the Opera House on many occasions.

"He (McMahan) has given us so much insight into what was going on at that time, little personality traits that he noticed about Jo Ann, and he's been able to share that with us,” Groeschel said. “I consider him our musical director because he has such a career in choral music, and training singers that he was just the perfect fit for that.”

The intern, Kate, is played by Emmie Vaughan, who is a junior at Granbury High School. She starred in a production of “Pollyanna” at Plaza Theatre Company in Cleburne when she was about 10 years old. Groeschel also cast her in “Mary Poppins” as one of the children.

Brian Lawson stars as Joe Nutt. Lawson has been involved in theater and the Opera House in many different ways, from building scenery to having a lead part in “Fiddler on the Roof.”

“I worked with him a lot, so he was somebody that I knew could take this and really create this character,” Groeschel said. “As a director, you could not ask for more than when you have actors who are dedicated, disciplined, prepared and ready to do the work, and obviously, deriving joy from doing it.”

Caitlan Leblo plays Miller. Leblo has also been active at the Opera House and in the Plaza Theatre Company in Cleburne. One year, Groeschel directed “Hello Dolly” at the Opera House. When the actress who played Dolly had to cancel, Leblo took the reins and learned her scenes, dialogue and music with very little rehearsal.

Leblo said, “I have loved having the privilege to research and portray a local legend who had such a great impact on the arts here in Granbury.”

“She is a fantastic singer and actress,” Groeschel said. “She’s very talented.”

The idea for the play came from the Bridge Street History Center Board of Directors, who wanted to “acknowledge the importance of the Opera House historically in Granbury and in Hood County.”

“It is the most significant piece of architecture and the history of it; it's not just the building, but the people who have been involved in it. They made the decision to have a play written about the opening,” Groeschel said.

He said he is excited for people to learn the history about the Granbury Opera House.

“We have so many new people in town and by ‘new, ’I mean, who have lived here two years, or 10 years, who may not know very much about the art and the evolution of the Opera House,” he said. “For me, it's fun to get to know that we're going to be sharing with everyone — people who know a lot more than I do about the Opera House, and then people who hardly know anything. It's like taking history out of the Bridge Street History Center and going to the people to give them an opportunity to experience more depth about something that's so important to our community.”

When asked what she was most excited about, Leblo replied, “for people to have a glimpse into the inner workings of a (theater), specifically the ups and downs the Granbury Opera House has gone through to get where it is today.”

“I’m honestly the most excited for people to be the most educated on their city and a place we all pass almost every day,” Vaughan said. “It’s so cool learning about our town and loving it and this is one of the many ways to do so. It’s been so fun to reconnect and jump back into the arts after being out for so long due to COVID. I absolutely love the cast and everyone I work with.”

To purchase tickets for “Granbury Follies,” visit — granburytheatrecompany.org and click on the “Special Events” tab.