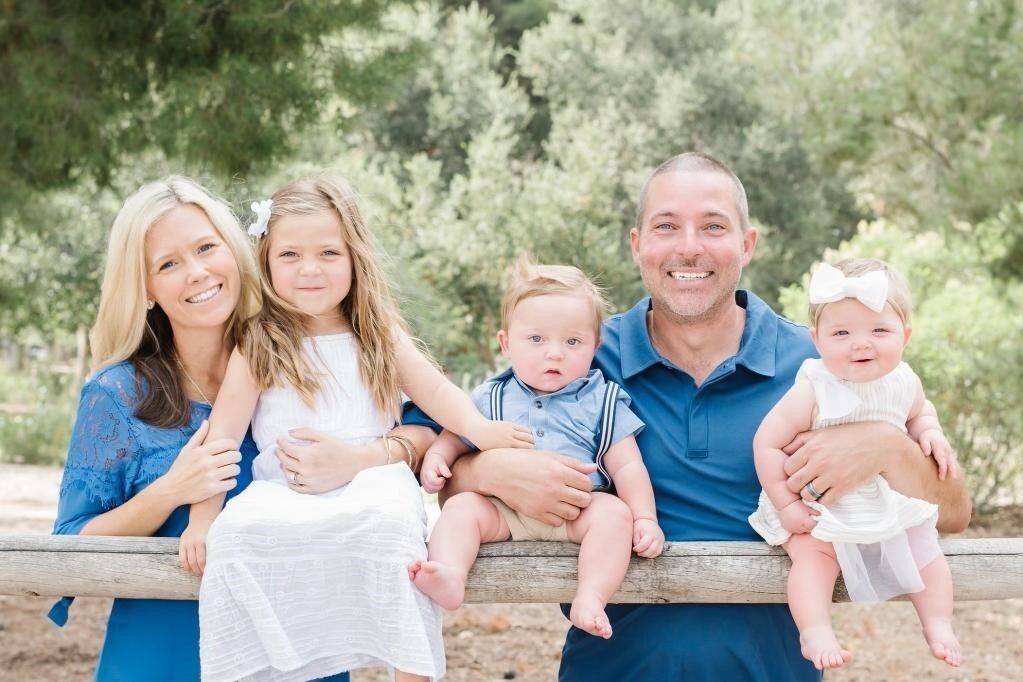 FAMILY LOVE: Jamie Tomlinson (left) poses with her 4-year-old, Bailey, her 10-month-old twins, Brady and Halle, and her husband, Daniel. 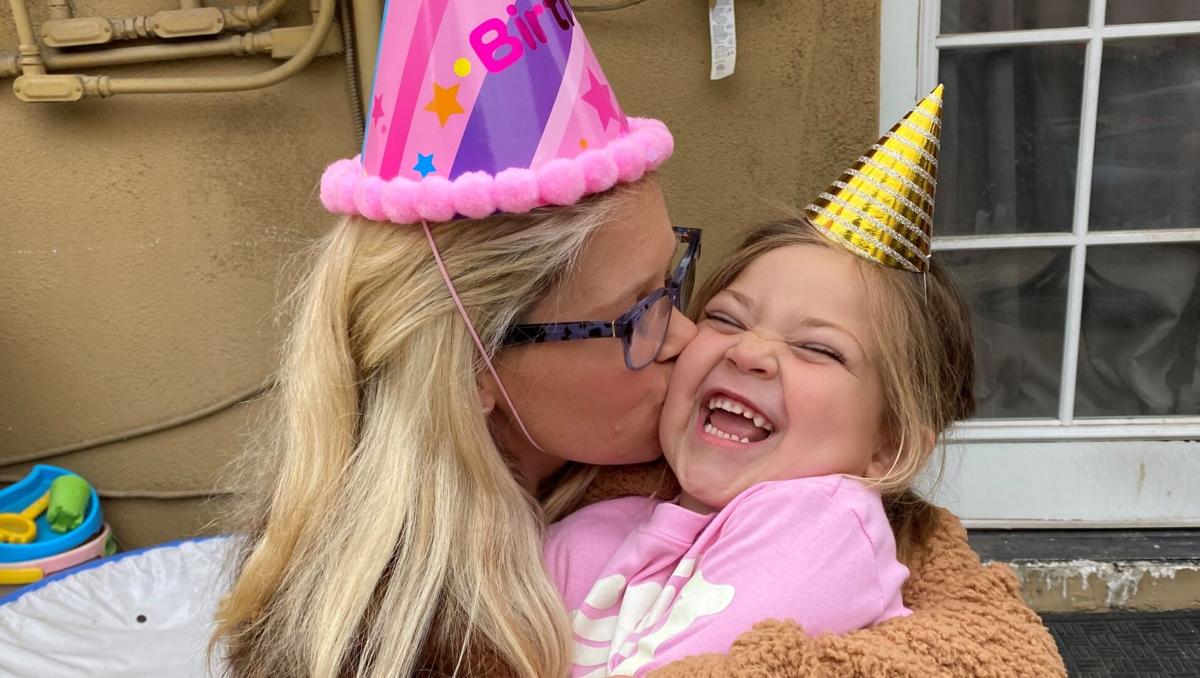 MOTHER/DAUGHTER LOVE: Jamie Tomlinson gives her daughter, Bailey, a huge kiss during Jamie's birthday celebration this past May.

FAMILY LOVE: Jamie Tomlinson (left) poses with her 4-year-old, Bailey, her 10-month-old twins, Brady and Halle, and her husband, Daniel.

MOTHER/DAUGHTER LOVE: Jamie Tomlinson gives her daughter, Bailey, a huge kiss during Jamie's birthday celebration this past May.

As a 38-year-old, gastric cancer was the furthest thing from Daniel Tomlinson’s mind.

But on July 12, it became a startling reality when his wife of seven years, Jamie, received the shocking diagnosis.

Daniel, a 2001 Granbury High School graduate, joined the Marines following graduation. He fought in Iraq and Afghanistan before making his home in Whittier, California, where he currently resides with Jamie.

Jamie was an otherwise healthy 39-year-old who worked out regularly, didn’t smoke, only drank socially and had no underlying medical conditions.

It wasn’t until 2018 that she started having problems with acid reflux and had her gallbladder removed, which unfortunately, didn’t provide a cure.

A couple months later, she started having abdominal pain and was experiencing shortness of breath. Jamie’s primary care doctor found fluid in her lungs and gave her antibiotics.

“They said, ‘You probably have some form of walking pneumonia. Just don’t do anything crazy and take this stuff,’” Daniel said.

From June 17-27, Jamie and Daniel took a trip to Granbury to see friends and family, but when they got back, Jamie started coughing.

“We were at my mom’s house for a couple of nights and she has cats. We kind of chalked it up to cat allergies,” Daniel said.

Jamie went back for a follow-up with her primary care doctor and was told that she had more fluid in her lungs. Her doctor scheduled an appointment with a pulmonologist, a physician who specializes in the respiratory system.

“At that point, it was like July seventh and the appointment was for August ninth so both of us were like, ‘Okay, it can’t be that serious if it’s like a month out,’” Daniel said.

Next, Jamie started experiencing hip pain, which Daniel had chalked up to a sciatic nerve, a possible symptom of post-pregnancy.

Unfortunately, that last symptom led to a diagnosis of gastric cancer.

“Every doctor is like, ‘Oh, that’s probably it. That’s probably it,’ because gastric cancer, if you look up the stats, you’ll see that in most cases, it’s like males over the age of 55 or 60 that get diagnosed with this. Not females. Not in their 30s,” Daniel said. “There’s nothing to pinpoint this in terms of where it’s coming from. There’s no family history of cancer. This has come out of nowhere.”

Jamie’s gastric cancer is currently at stage 4 and has metastasized into some of the bones in her body. She is currently experiencing back pain due to a T12 thoracic compression fracture on her spine that could be related to her cancer or caused from something else entirely.

“I mean spirits are still high,” Daniel said. “She wants to be an old lady. She's not given up by any means, but I know she's in a lot of pain right now.

“It scares me. Just in general. I can’t imagine living without her. This wasn’t something that was supposed to happen. Not in your 30s. As a husband, as a man, I'm programmed like, ‘How do I fix it?’ I can’t fix it and it kills me.”

Jamie recently began chemotherapy. Daniel said the plan is to continue doing chemotherapy and start immunotherapy. He said there may be some other clinical trials that Jamie can do in the future, like targeted radiation.

“The doctor said it's treatable, but they also said not to look at numbers online because a lot of those numbers are based on the five-year survivability rate, and that doesn't mean that she's not going to survive; it just means that if a male gets diagnosed, males over 55 don't tend to take care of themselves, so that's a big part of it too,” Daniel said. “If we were in our 70s or something, I’d be upset. I'd still cry and have the same emotions but it would be different, you know? It's not supposed to be like this.”

“Daniel Tomlinson graduated 20 years ago this year. He chose to become a U.S. Marine in 2001,” Peters said. “That man made himself of service the same year our country experienced its worst terrorist attack ever. I know all of us graduating that year thought about it but this hero stepped up. I don’t know Jamie except through his words, but I know unconditional love when I hear it, and Danny speaks of her as she was his salvation.”

Daniel and Jamie have three kids at home: Bailey, who is four, and 10-month-old twins, Halle and Brady.

The Tomlinson family and Peters are asking for prayers and donations to the family’s GoFundMe and meal train.

“The Tomlinson family doesn’t deserve this kind of tragedy, but we can prove that his sacrifices for all of us are appreciated,” Peters said. “Everywhere veterans go, people say, ‘Thank you for your service.’ This is finally a chance to step up like Daniel did, and make those words count. Please donate to his GoFundMe account. A small amount to us can make this time easier for a man holding the world on his shoulders … again.”

“It’s really hard,” Daniel added. “You have to put your life in somebody’s hands and trust the process, trust science and trust God. We’re asking for prayers and shares. We want to grow old together.”

To donate to the Tomlinson family’s GoFundMe, visit gofundme.com, search for “Jamie Tomlinson” and click on the first link.

For family meals, individuals can participate in the meal train through DoorDash by sending meals to the family by porch delivery between 4-5 p.m. The family has no dietary restrictions at this time. To donate to their meal train, call Breaz DeRousse at 562-254-1112 or Dianna Bolduc at 714-875-8549 to access the website and coordinate details.

Peters added, “We can’t call ourselves the ‘best small town in America,’ if we don’t come together and take care of our heroes.”