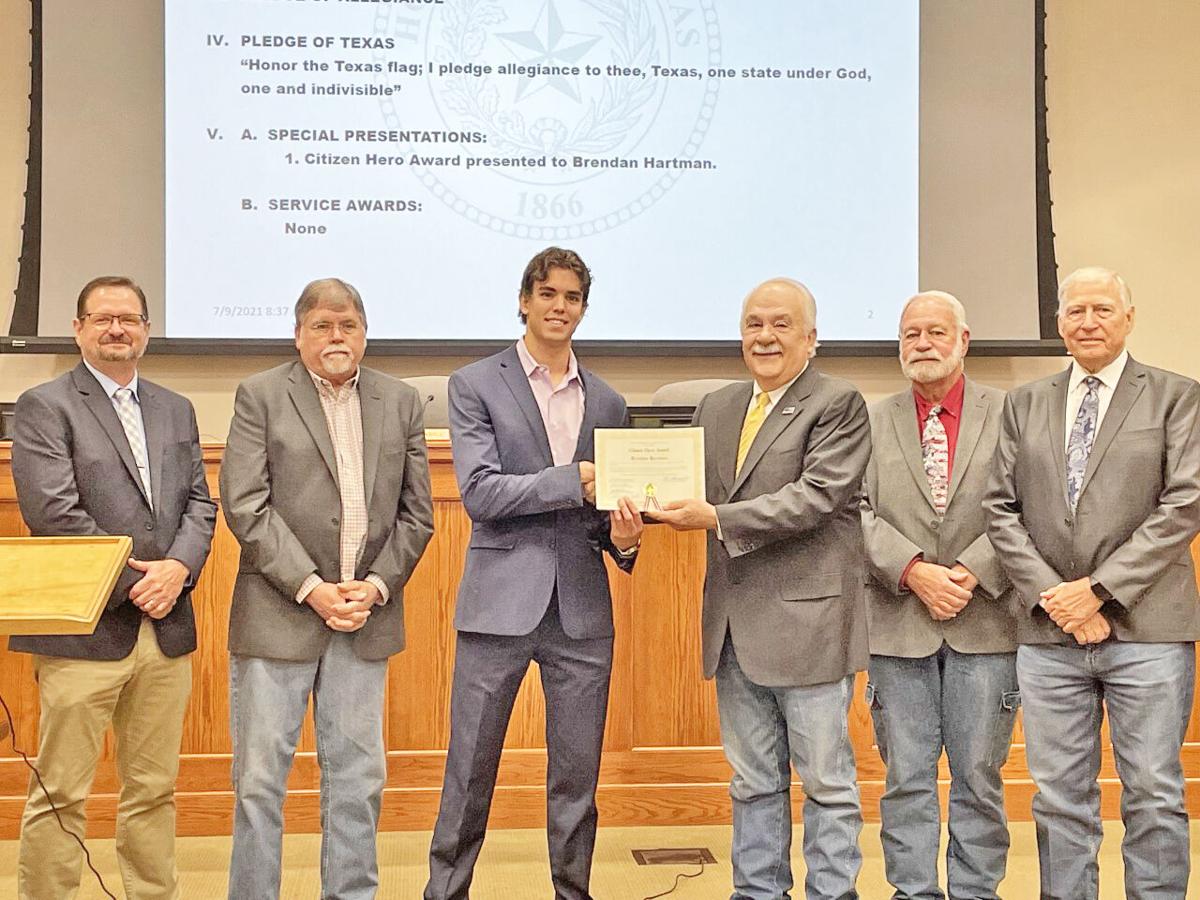 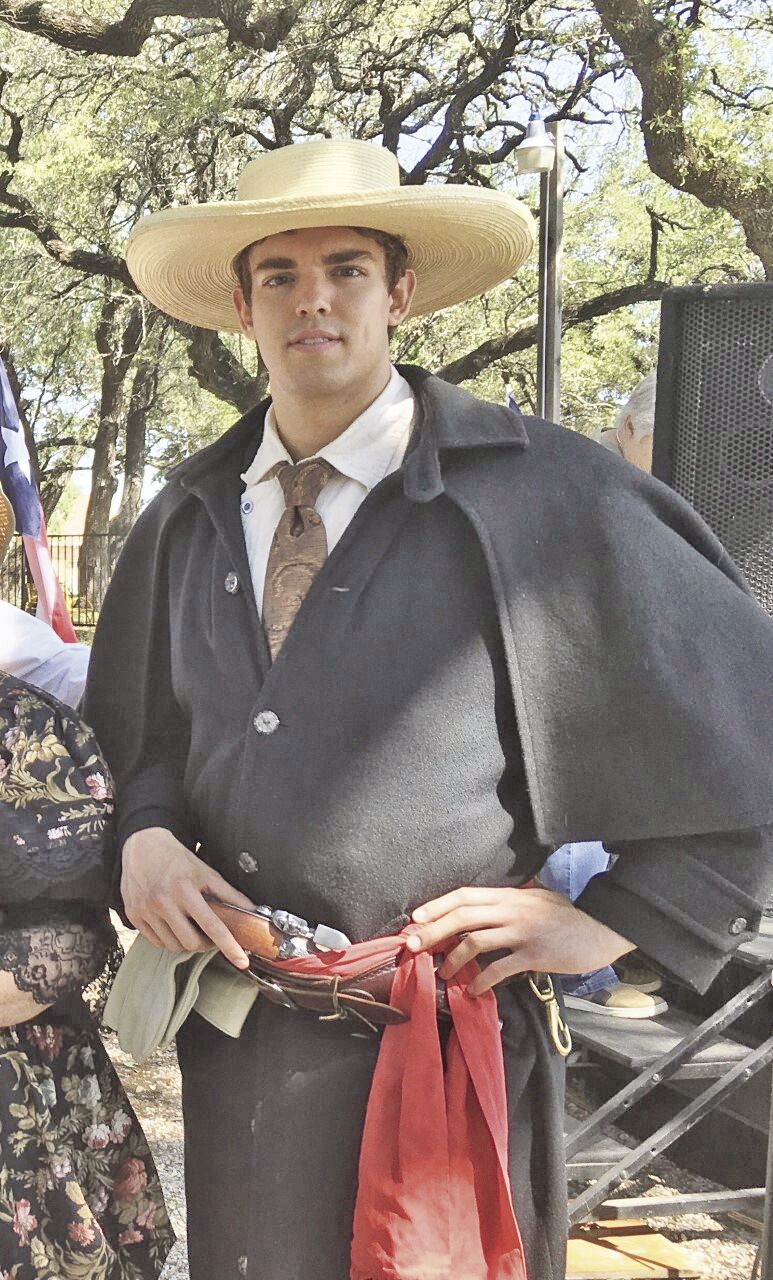 REMEMBER THE ALAMO: Brendan Hartman dressed as William Travis, the Texas hero who died at the Alamo, during the Stroll Thru Texas History event on May 15.

REMEMBER THE ALAMO: Brendan Hartman dressed as William Travis, the Texas hero who died at the Alamo, during the Stroll Thru Texas History event on May 15.

Twenty-five-year-old Brendan Hartman did not anticipate that he would become a local hero in the span of a few seconds, but that’s exactly what happened to the Texas Christian University graduate.

Hartman, a resident of Lewisville, was in Acton portraying William Travis — the Texas hero who died at the Alamo — during the Stroll Thru Texas History event on May 15.

Little did he know that his Travis-style sword would end up potentially saving the lives of everyone near him.

Hartman was taking a break from performing and visiting with other participants at the event when he noticed something odd.

“A food truck had a generator with a towel over it, and the towel had caught on fire,” said Peggy Freeman, member of the Texas Heroes Foundation. “And no one was there to see it except for the three or four of them.”

Hartman’s quick thinking led to him using his sword to flip the towel off of the generator.

“There wasn't a lot that ran through my mind. It was more just an automatic response,” Hartman said. “Like, if I thought about it, I may have been like, ‘What kind of idea is this?’ but for some reason the sword came out automatically. So, I'm still in full regalia. I had the straw-brimmed hat and the black wool coat and my sword leading the way. And I run up not knowing what to do when I got there, but then I was like, ‘Oh, use a sword to pull the burning towel off the generator.’”

Fortunately, he was able to remove the towel, but the danger was not over yet.

Unbeknownst to him, there were two big plastic tanks containing gasoline underneath the towel and generator. They were swelling from the heat.

Once he noticed the gas tanks swelling, he quickly grabbed the tanks and “chucked them off into the distance.”

“Not only did he take the towel off, but he pulled the gas tanks out, which I told him was so brave, but don’t ever do that again,” Freeman said.

Hartman’s quick reflexes and bravery potentially saved the lives of an older couple and their grandson, who were inside the food truck and unaware of the danger.

“There wasn’t a lot of thought; it was more like instinctual action. Once the gas cans were away from the fire, I knew that the danger was averted. If the fire had spread with the gas cans, it would have been no bueno,” Hartman said.

To honor Hartman’s quick action, he received the Hometown Hero award, presented by the Hood County Commissioner’s Court on July 9.

“In recognition of the selfless heroic action you took to prevent potentially life-threatening injuries to citizens of this community, an ordinary person who faces extraordinary circumstances and acts of courage, honor and self-sacrifice. On the afternoon of May 15, 2021, your quick thinking and immediate action, without hesitation was just that — the definition of a citizen hero — would save lives and averted a tragic outcome of many others,” County Judge Ron Massingill read at the commissioner’s meeting.

Surprisingly, it was made known during the meeting that Hartman had also potentially saved the life of Precinct 3 County Commissioner Jack Wilson.

“I'll tell you what, if those gas cans would've exploded ... and I was there about from here to halfway up the aisle, you know, when he pulled the towel off, so I saw all of that at the time,” Wilson commented.

“You even saved a commissioner’s life,” Massingill chimed in.

Both Freeman and Hartman said they believe that the sword Hartman used to get the towel off of the generator is symbolic of the real William Travis.

“He had just done the presentation where Travis draws the line in the sand, so that sword had drawn the line in the sand several times that morning for those who stayed at the Alamo and defend Texas,” Freeman said. “It’s a tool and I think it was a God thing. I really do.”

According to the story that's been passed down, Travis drew a line in the sand of the Alamo courtyard and asked any man willing to stay and fight with him to step across the line.

“It's sort of symbolic,” Hartman said. “There's some debate as to whether or not Travis actually took a sword and drew a line in the sand at the Alamo in 1836. But whether or not he did there was definitely this conscious decision every man made at the Alamo to stay and surrender their lives for the cause of Texas. So that sword and the Bowie knife were the two big props that were part of the show, so that sword definitely came in handy.”

Hartman said he felt it was a privilege to be able to protect attendees at the Stroll Thru Texas History event.

He added, “I feel humbled and honored that I was able to be in the right place at the right time, and take direct action.”