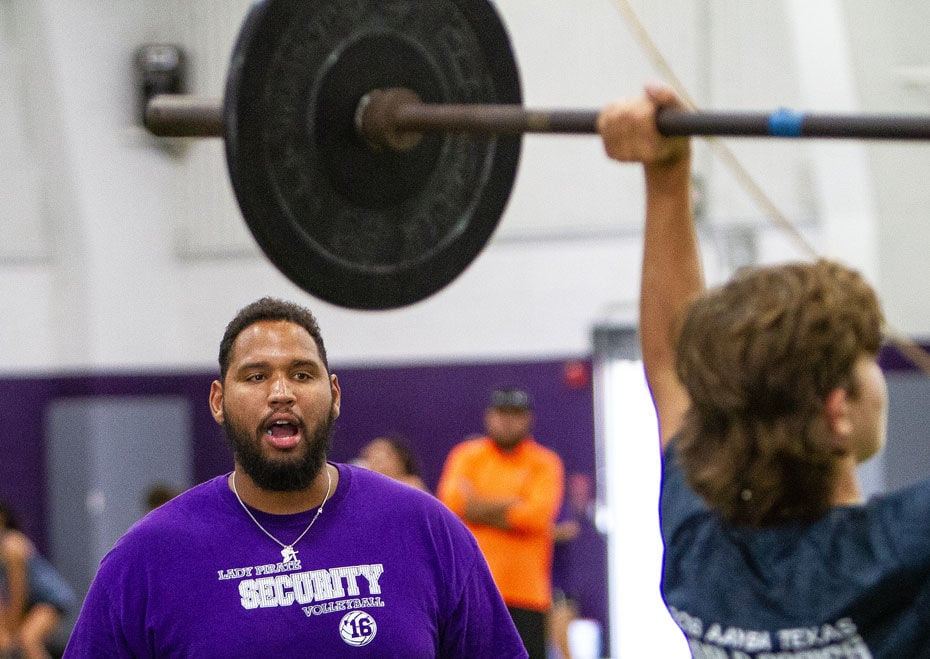 DEMANDING: Coach Wesley Hooks checks out the form of weightlifters during strength and conditioning training and Granbury High School. 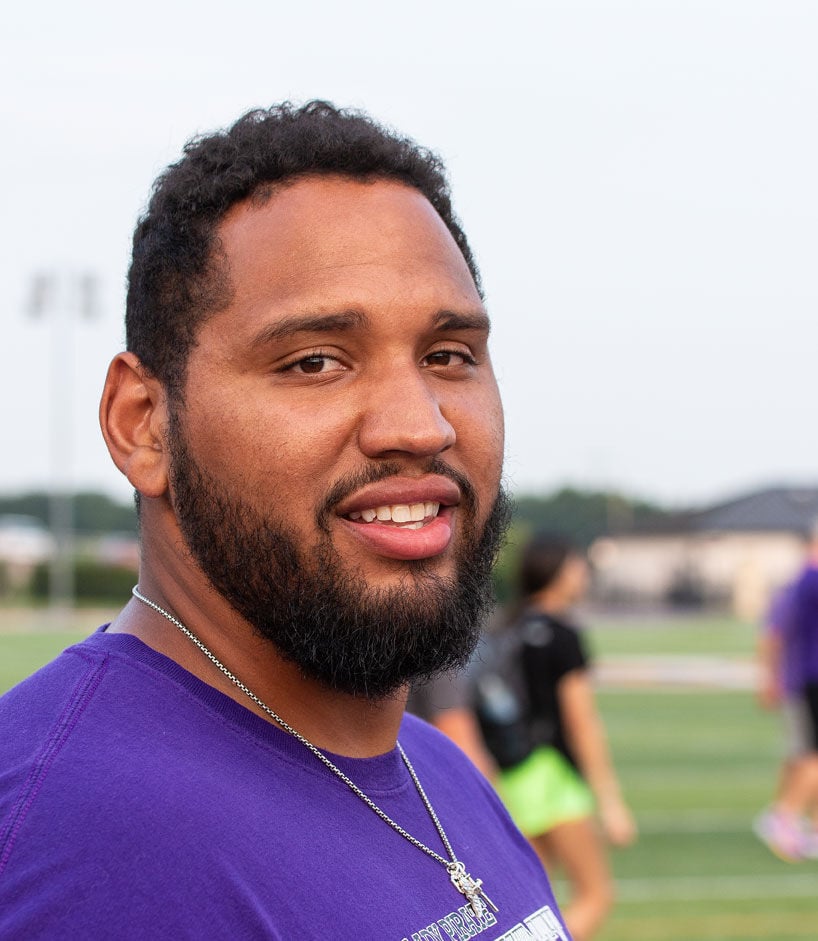 SMILING: Coach Wesley Hooks has hopes of one day being an offensive coordinator.

Assistant football coach Wesley Hooks is looking to make an immediate impact on Granbury High School’s defensive line despite his goal of one day being an offensive coordinator.

“I like it, and I am excited because I believe working as a defensive coach will help me overall in my career,” Hooks said.

Hooks’ football career at nearby Tarleton State University indicated he is adaptable as he played all five offensive line spots. His play at right guard earned him all-Lone Star Conference honors his senior season when the Texans posted a 10-0 record.

“That is the highlight of my memories from playing college ball,” Hooks said. “The fans all stormed the field – it was great.”

It could have very easily not have happened.

Hooks’ homelife as a high schooler was a rough one due to the health circumstances of his mother, Princess, who had eight heart surgeries before he graduated.

During his junior year, the situation had grown so bad that Hooks was the only one at home, and a life-changing decision was made when his head coach and athletic director Jamie Thomas opened his home to him.

What followed was a stable home life filled with structure and support.

As a deacon in his church, it was only natural that Thomas also introduced Hooks to religion, and he was baptized his senior year.

His all-district and other accolades from high school earned Hooks the attention of college scouts, and he accepted a scholarship offer from Arkansas Tech University.

Later, Hooks would decide that Tarleton State better fit his playing career, and it was Todd Whitten, the Texans’ head coach, who made that decision an easy one.

“Coach Whitten was honest with me and told me he was on a mission to rebuild the Texan program,” Hooks said. “His energy and motivation won me over right away.”

After graduation, Hooks landed his first job in the Peaster ISD, and things were starting to roll.

It was homecoming night when everything came to a screeching halt with a phone call from his older sister, telling him that his mother needed emergency brain surgery.

Her aftercare was going to be extensive, and two pieces of her brain had to be removed.

Hooks was going to have to “pay for his raising,” and he would be involved in helping his mother learn to talk, walk and feed herself — just as she did for him when he was a child.

Forced to leave his job at Peaster in order to help care for his mother, Hooks landed an inner-city school job and helped his mother relearn her life skills.

With time and lots of help, Princess began to make her recovery, and when the news came around that Granbury was looking for an assistant coach, Hooks didn’t know if it was the right time.

His mother, who could now walk and do most things independently, assured him that it was time to pursue his dream.

“It was a dream come true to be hired here,” Hooks said. “I am so happy to be here and learning from coaches like Sunny Galindo and Jody Brown.”

While the football season hasn’t started yet, head coach Chad Zschiesche is impressed with the work of one of his newest hires.

“You can tell right away that coach Hooks has a passion for coaching,” Zschiesche said. “He has a genuine interest in our athletes and is always looking to motivate them. I could tell that about him early on in our interview process.”

Hooks has some immediate goals for the defensive line, including damming up other teams’ running games, being at least third in the district in quarterback sacks, and making quarterbacks wary when they drop back to pass.

Hooks believes that part of motivating athletes is helping them rethink the process when their brain tells them they are tired.

“Our brains tell us it’s time to stop when we still have about 30-percent left to give,” Hooks said. “As a coach, that’s my job to make an athlete realize they can go further than they thought possible.”

Physical education will be Hooks’ job at Acton Middle School, and he will travel to the high school to coach athletics.

While he may be a recent college graduate, Hooks is a mixture of “new-school flair” and old-school coaching.

“I am a guy who is going to get in your face and challenge you as an athlete. I am going to demand the very best from you,” Hooks said. “But I also want my athletes to know I’m a brother, a son, an uncle, and if they are stuck somewhere and need help or a ride – I am there for them, too.”

The examples set for him by coach Thomas have taken a solid hold, and if Hooks is ever referring to “his father,” he is talking about Thomas.

“Winning isn’t always about championships,” Hooks said. “If I can end my career knowing that I have made an impact and made someone’s life better – winning a championship will never matter to me.”