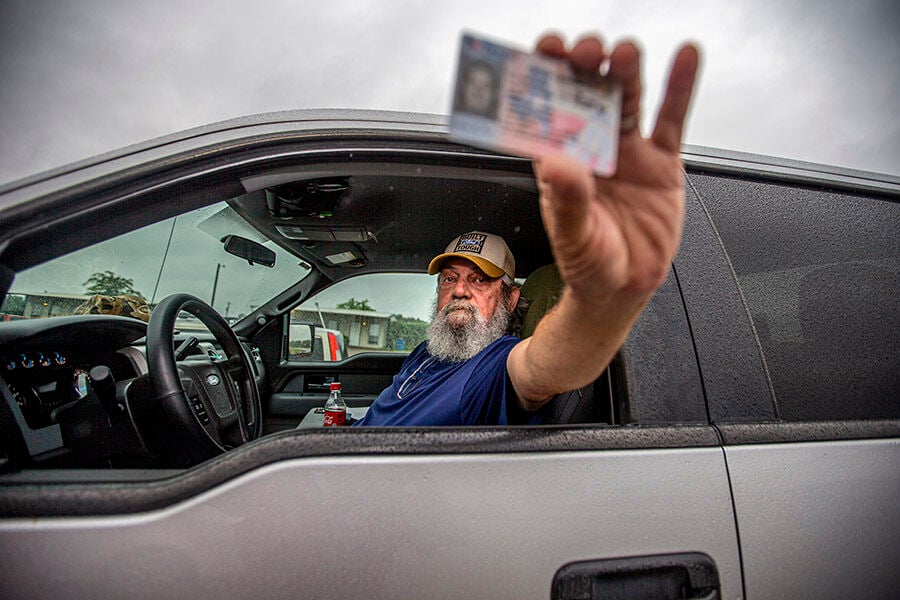 GETTING PERSONAL: Troyce Row and others at Indian Harbor take issue with a security gate that forces them to show their driver's license to a camera or insert it into a kiosk. 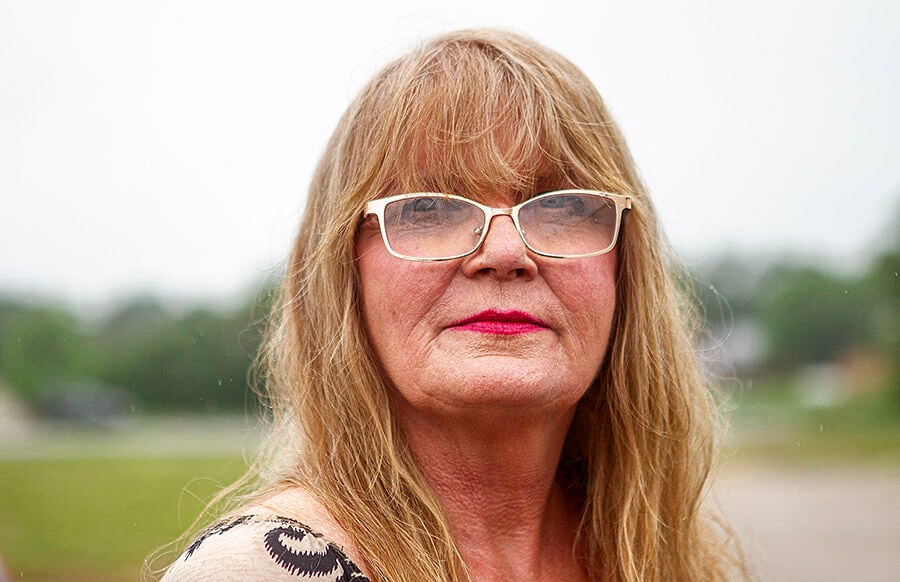 PLAINTIFF: Sharon Rhine is one of 18 plaintiffs in a lawsuit against the Indian Harbor HOA. 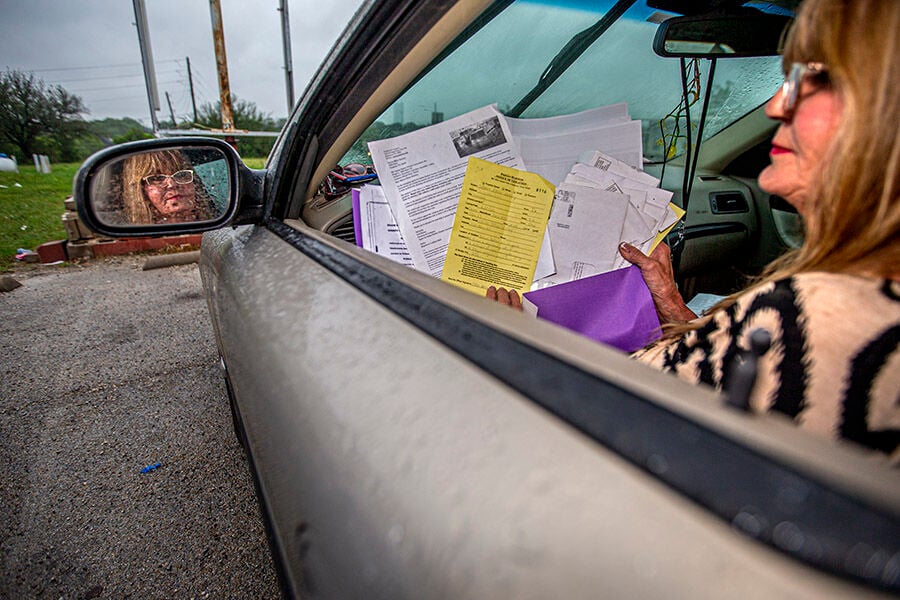 A FINE MESS: Sharon Rhine holds a folder full of citations that she said she received from Indian Harbor management over alleged gate-related and traffic infractions. In testimony during a recent court hearing, Rhine stated, "That gate is not for security purposes; it's for collections." 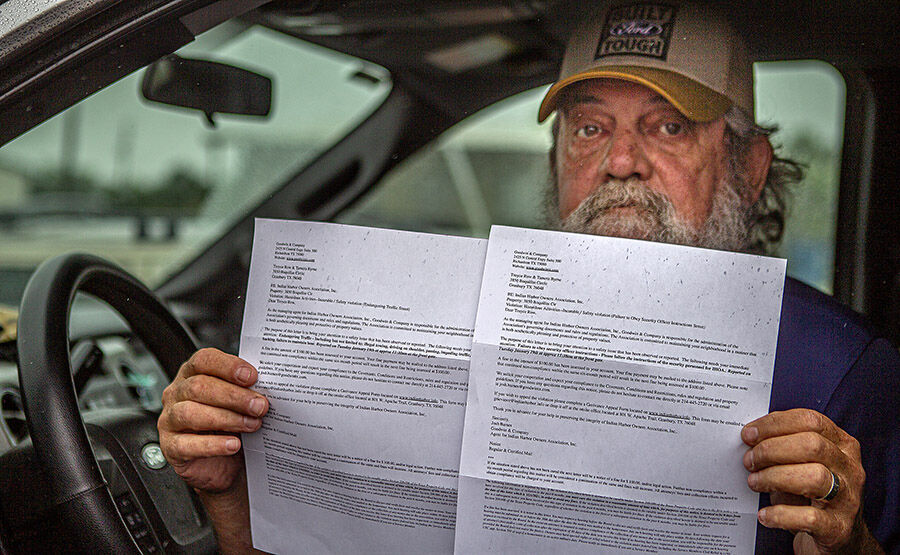 MOUNTING CHARGES: Troyce Row, one of 18 plaintiffs in a lawsuit against the Indian Harbor HOA, holds documentation of fines assessed against him for alleged gate violations.

GETTING PERSONAL: Troyce Row and others at Indian Harbor take issue with a security gate that forces them to show their driver's license to a camera or insert it into a kiosk.

PLAINTIFF: Sharon Rhine is one of 18 plaintiffs in a lawsuit against the Indian Harbor HOA.

A FINE MESS: Sharon Rhine holds a folder full of citations that she said she received from Indian Harbor management over alleged gate-related and traffic infractions. In testimony during a recent court hearing, Rhine stated, "That gate is not for security purposes; it's for collections."

MOUNTING CHARGES: Troyce Row, one of 18 plaintiffs in a lawsuit against the Indian Harbor HOA, holds documentation of fines assessed against him for alleged gate violations.

A visiting judge on Friday denied a request by residents of Indian Harbor for an injunction against security gates at the front entrance that they say cause traffic backups and at times have forced them to call law enforcement because they were denied entry.

Several Indian Harbor residents said they have received multiple citations for alleged gate violations that they feel are in retaliation for a lawsuit filed against the homeowners association (HOA) and individual board members.

One of the gates is for HOA members who have paid $25 for a sticker to place on their vehicle; the other is for vendors and residents who do not have a vehicle sticker. Motorists who pull up to that gate are asked to insert their driver’s license into a kiosk or, if the ID is damaged in some way, hold it up to a camera. Some residents say they are opposed to showing their driver’s license because it contains personal information.

Residents say that due to the placements of barriers, motorists who are denied entry have no way to move over, which results in other drivers having to back up. According to court testimony, traffic pileups have resulted in a mile-long line at times and efforts to get through the gates can take a half hour or more.

The southern Hood County development used to have a guard station that was manned around the clock, but last October HOA leadership switched to a remote monitoring system that is reportedly managed by a company based in Florida. The vendor gate has a camera and a speaker box where motorists can communicate with a company representative.

The legal wrangling began in January 2019 when Rex Jackson, who at one time owned about 200 lots in Indian Harbor, filed a lawsuit against the HOA that was ultimately joined by 17 other plaintiffs. Allegations include unlawful amendments made to deed restrictions; unlawful assessment increases; decisions that violate requirements for a majority vote in all 18 phases; and failure to require the voting signatures of both spouses where marital property is concerned.

Jackson has reportedly at times offered rent-to-own agreements to tenants. Gina Montoya, who joined the lawsuit, said that on the day she arrived with her car loaded with belongings to move into a “tiny house” – a 10-foot-by-20-foot dwelling owned by Jackson in Indian Harbor's Phase 18 – she was initially told that she could not purchase a sticker because she is a renter.

Shortly before the Jackson lawsuit was filed, the HOA had settled a different lawsuit brought by two plaintiffs who sought to recover back assessments that they claimed were unlawfully collected.

The lawsuits highlight challenges and legal vulnerabilities that have impacted or are impacting HOAs in growing Hood County. Some HOAs were created 50 years ago when Lake Granbury was created and such organizations were new. Over time, HOA boards built amenities such as teen centers, community centers and swimming pools, increasing assessments in order to maintain roads and facilities. Some may have made legal missteps at times in doing so.

The lawsuit involving Jackson and the other plaintiffs went to trial on the afternoon of Jan. 25 and a settlement agreement was reached after a morning of testimony the following day. However, a dispute arose between the parties over the particulars of the consensus.

Senior District Jude John Weeks presided over Friday’s hearing due to the recusal of 355th District Court Judge Ralph Walton. Walton provided an explanation for his recusal in an email to the Hood County News.

“Since I had already heard a substantial portion of the evidence in the case, I felt it would be in the best interest of all parties and in the interest of justice that I let another judge, having no knowledge of the evidence, to preside over the case,” he stated.

Gary Werley is the attorney representing Jackson and the other plaintiffs. He said that he added three new plaintiffs to the case when follow-through on the settlement agreement stalled.

Werley successfully represented the previous plaintiffs who sued Indian Harbor and prevailed in lawsuits filed against HOAs in Sandy Beach, Rock Harbor, Oak Trail Shores and Western Hills Harbor. The win against the Western Hills Harbor HOA was upheld by an appellate court.

The Indian Harbor HOA is being represented by Adam Pugh of the Austin-based Cagle Pugh law firm. He participated remotely in Friday’s court proceedings and was visible to those in the courtroom on a projection screen.

Before hearing testimony about the security gates, Weeks questioned both attorneys about the settlement dispute. Each indicated that the other was to blame. Pugh stated that “additional typeset” in his drafted document referred to things that had been “implied” as part of the agreement.

Weeks told Pugh that his draft of the agreement “has a lot of stuff that they didn’t talk about.”

The judge instructed Pugh to create a new document “that states only what is in the Rule 11 agreement.” He indicated that he would enforce the agreement once that happens.

The judge then turned to the matter of the security gates.

Several witnesses testified about their personal experiences, including Barbara Brown-Carter, one of the plaintiffs in the Jackson lawsuit. She testified that she is on “PRN oxygen,” which means that she uses oxygen when she needs it, and that she was trying to get home for an oxygen treatment when she was denied entry at the gate.

Troyce Row, another plaintiff, also testified. He told the HCN in an interview a few days before the hearing that he was assessed about $200 in gate violation fines within about two hours of being denied entry at the gate and enlisting help from a sheriff’s deputy. Row also said that the fines were levied shortly after he, acting under Werley’s direction, had submitted to the Indian Harbor office a new set of bylaws that had been agreed upon by residents of Phase 18, where he lives.

One man testified that he has a bladder problem and was delayed at the gate for so long, “I literally soiled my pants waiting.”

Plaintiff Sharon Rhine testified that she has received numerous gate-related citations as well as tickets for alleged speeding and safety violations on days when “I didn’t go anywhere that day.” Rhine stated that she called the sheriff’s office on four occasions after being denied entry at the gate and also said she was denied a sticker when she attempted to purchase one.

“I had lost my driver’s license, but they had a copy,” she said on the stand. “And I had my insurance card.”

Rhine noted a disparity in fines related to the two gates and said that it’s cheaper to get a ticket going through the homeowners’ lane than the visitors’ lane.”

“That gate is not for security purposes; it’s for collections,” she said.

Immediately after the last witness testified and was cross-examined by Pugh, Weeks denied the request for injunction relief.

Werley noted after the hearing that the judge’s instructions about the settlement agreement do not mean that Indian Harbor’s legal challenges are over. He noted that he was careful about the details of the agreement and said that he can separate out the three newest plaintiffs and file a separate lawsuit. He also stated that he made no promises not to sue any board members individually or not to defend any of the plaintiffs if they are sued by the HOA.

Pugh provided a statement to the HCN via email Monday morning. It said, in part: “The Indian Harbor Owners Association fully expected the result reached at Friday’s hearing. This case has always been about minor technical issues with the way the Association has done business for over 50 years. The Association has always tried to operate in an open and democratic way, offering every owner in the community the right to vote on all major decisions.”

Pugh noted that Friday’s hearing was the second time that Werley and his clients failed in their attempts to shut down the security gates.

“Like any new system, the automated gates at Indian Harbor may need some fine tuning,” he stated. “But completely removing them would go against the will of the vast majority of the owners in Indian Harbor who enjoy having a private community.”

Pugh further stated that once “a couple of ministerial actions” are performed, the case “should be dismissed shortly.”