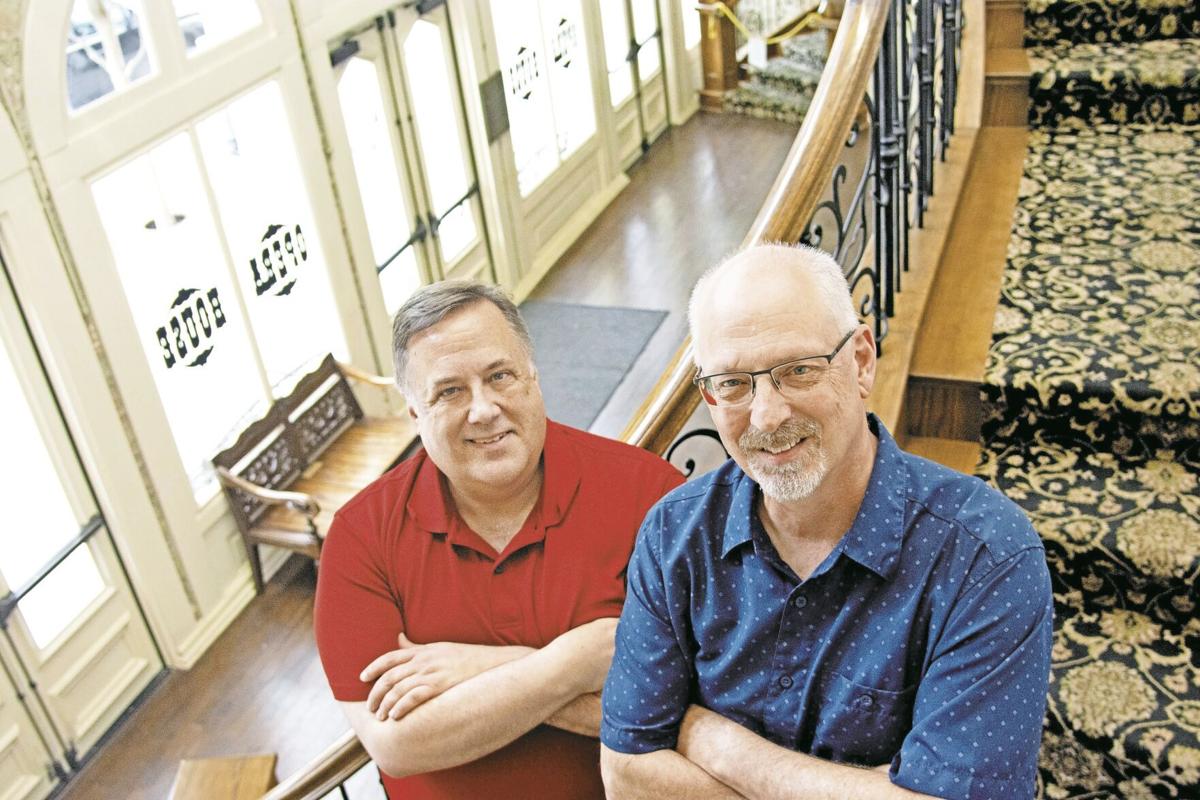 BACK IN FULL SWING: Granbury Opera House producers Jeff Meador (left) and Micky Shearon (right), are excited for the official reopening of the Opera House and are looking forward to where the rest of this season will take them. 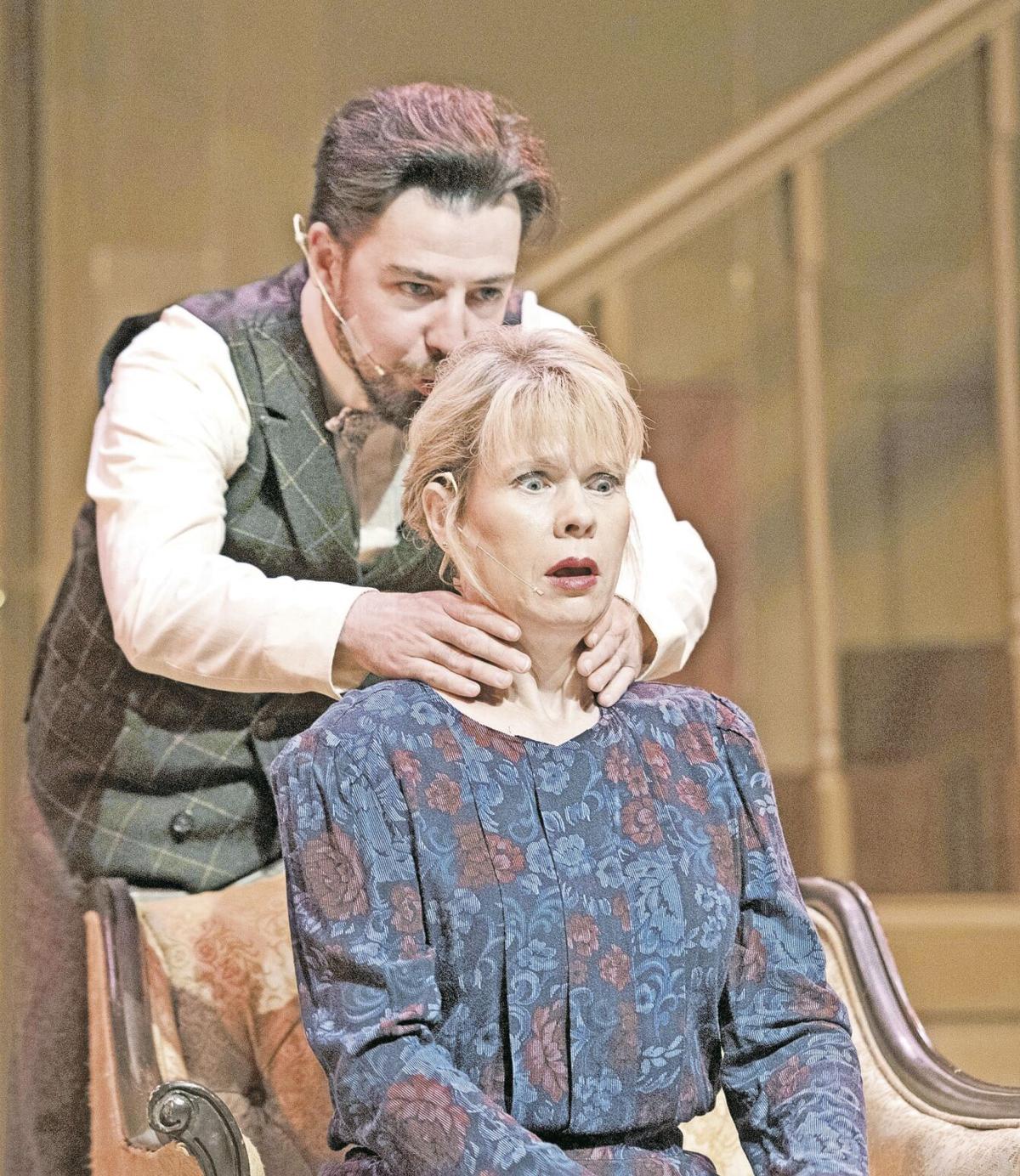 ALL 'CHOKED' UP: A scene of "The Mousetrap" is portrayed on the Opera House stage by local performers.

BACK IN FULL SWING: Granbury Opera House producers Jeff Meador (left) and Micky Shearon (right), are excited for the official reopening of the Opera House and are looking forward to where the rest of this season will take them.

ALL 'CHOKED' UP: A scene of "The Mousetrap" is portrayed on the Opera House stage by local performers.

The Granbury Opera House is officially back and open to 100% capacity, as its first Broadway show of the season — Agatha Christie’s “The Mousetrap” — debuted on May 21.

Last year was an unprecedented time for the Opera House as producers Micky Shearon and Jeff Meador were unsure when they could officially reopen due to COVID-19.

In fact, the Opera House went through two different shutdowns because of the pandemic.

“We didn’t get to do the final weekend of ‘Producers’ because that was late March of ‘20,” Meador said. “Then, we canceled the next couple of shows, which are now rescheduled for this year. Then, we came back in June to do ‘Legally Blonde,’ and it was supposed to run five weekends, but it ran four weekends before we shut down again for 10 months.”

Granbury Opera House had a soft reopening in April with several “GTC Greatest Hits” shows, tribute concerts and “The Lion of Texas – A Conversation with Sam Houston,” — all operating at only 50% crowd capacity — but Shearon said he considers the debut of “Mousetrap” their official grand opening.

After "Mousetrap,” the following concert series and Broadway performances will finish off the 2021 season:

Shearon is looking forward to seeing the performance of “Fiddler on the Roof” on the Granbury Opera House stage.

“As hard as it is to believe, that show’s never been performed on the Opera House stage,” he said. “We did it back in 2013, but that's when the Opera House was under renovation, so it was closed and we were performing across the street at Granbury Live. It's a rather small venue and ‘Fiddler on the Roof’ is a big show, so we couldn't hardly do it justice over there. I'm excited about finally getting that show on the Opera House stage.”

As for Meador, he is excited to see “Big River: The Adventures of Huckleberry Finn.”

“It's about the story of Huckleberry Finn and his journey on the Mississippi with Jim the slave. It's got some really incredible music and a great storyline,” Meador said. “I think we'll fit into what people in Granbury and our surrounding area want to see. It's not as well-known as Fiddler, or some of the other shows we do, but it'll be incredibly entertaining.”

The opera house will also host several summer camps this year for teens, kids and littles as they will get the opportunity to put on the production of “Shrek Jr.” The teen show will be held July 16-25 and the kid show will be held from July 19-22.

For individuals who purchased 2020 season tickets, due to the temporary shutdown of the Granbury Opera House because of COVID-19, those season tickets will cover all 2021 plays and three shows in 2022.

Season ticket holders were also sent a survey to weigh in on the type of productions they would like to see in 2022.

“We really try to put onstage a good mixture of what our season ticket holders want to see,” Shearon said. “It’s the method we've adopted now, and we will be announcing our next season very, very soon. I know our patrons will be excited to see what they get to pick from.”

Now that the Opera House is officially reopened, both Shearon and Meador are excited to see where the rest of this season takes them.

“I think we would have been happy if we'd had, you know, 50 people show up,” Shearon said. “I don't think Jeff or I really knew what to expect, but I think by any measure, we're ecstatic at the responses. Jeff's in the show so he sees it while the show is actually going on. The audiences seem to be really engaged, and very enthusiastic. As a performer onstage, when you have a really engaged audience, and they're really enthusiastic about what’s going on onstage, it doesn't get any better than that for performers. We're just thrilled.”

“Once we were able to get ‘Mousetrap’ onstage, everything kind of just started to return to where we were a year and a half ago,” Meador said. “Ticket sales were back to normal. Revenue numbers were back to normal. I mean, we're a nonprofit so making money is not our primary goal. Our goal is to put on good quality performing art entertainment, but the money needs to be there in order to pay the bills, pay the staff, light bill, rent, set and everything that goes along with it. It's reassuring, and makes us very optimistic to know that our audience is coming back.”

For more information about the Granbury Opera House, visit www.granburytheatrecompany.org.

“The Opera House is a big tourist attraction for downtown Granbury, so we are mindful of our responsibility to the community to bring people into town to stay for a weekend or to eat or to shop,” Meador added. “We think we set a very good track record before the shutdown and if everything continues on like it is right now, then we should be pretty good for the rest of this year.”

Shearon added, "If things go as well as they have from ‘Mousetrap,’ we should be doing really well. We're very encouraged.”

Community rallies together to assist veteran after house fire