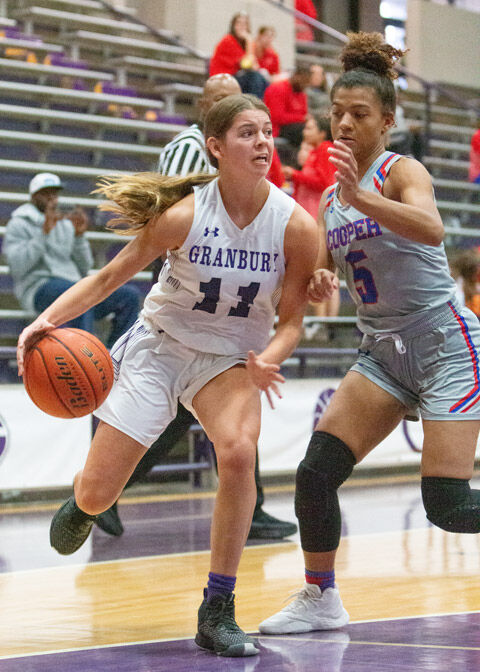 DRIBBILING: Ella Garner works the ball to the inside. 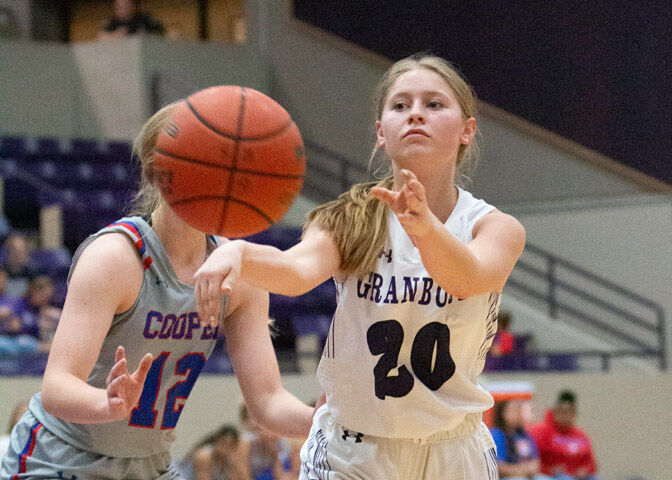 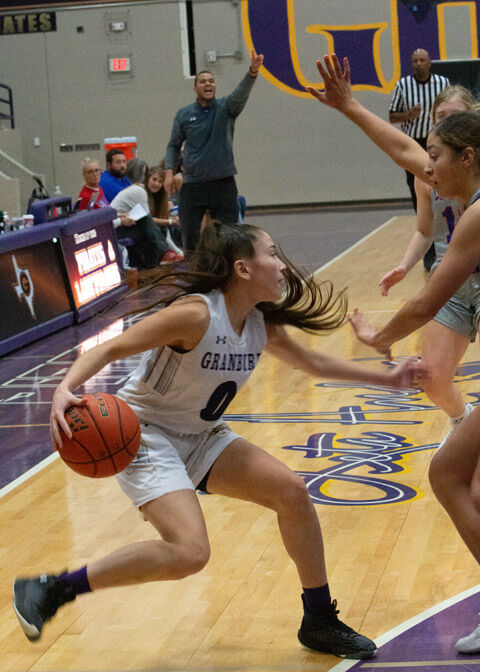 THE PAINT: Ashley Torres tries to find a seam in the Copper defense.

After an 0-2 start, Granbury High School’s Lady Pirates are on a four-game win streak, and they are proving they can win tight basketball games after back-to-back victories over Godley (62-51) and Abilene Cooper (52-49), Nov. 21-22.

GHS head coach Alan Thorpe is trying to give his team a taste of what the next month will be like — and got his Lady Pirates as much live-action experience as possible before the Thanksgiving break.

The first holiday break of the basketball season is always tricky for coaches, who have just started to find out how their team plays against opponents before letting go of their athletes for a few days.

It’s also that time of the year when tournaments roll around. The Van Griffith Kia Basketball Tournament is set for Dec. 2-4 in the James Wann Sports Center at GHS. There is only one away game, Nov. 30 at Cleburne, before the Lady Pirates defend their home court.

“We approach most tournaments as an opportunity to get in shape, and we are already in pretty decent shape. We had some kids that have played a ton of minutes,” Thorpe said. “Way more minutes than they have been playing, and in tight ballgames they are going to have to play those minutes. That’s kind of what we want to get out of that tournament — to keep getting ourselves into better shape.”

Granbury’s current four-game run coincided with the return of junior Ella Hamlin, who does bring a hot scoring hand to the court, but more than anything she seems to lift the Lady Pirates’ consistency as a team.

Against Cooper, Granbury opened with seven straight trips down the floor without a basket and didn’t put the ball through the hoop for the first 5:30 of the contest. The Lady Pirates could steal the ball, but they couldn’t put it through the basket as they launched a perimeter attack and were 2-for-11 from behind the 3-point arc in the first half.

There were also problems with blocking out opponents, and when his players failed to complete their assignments, Thorpe provided some bench time.

“We were back and forth and missed a ton of block-outs, which is something we need to do if we want to stretch out a lead a little,” Thorpe said.

A 20-point fourth quarter was fueled by 13 points from Hamlin. Kalynn Burrell came off the bench to provide a pair of beautiful assists in the closing minutes that put the Lady Pirates up for good.

Nina Parker, who is still learning her new post position, has proven she can score, mix it up under the basket on defense and provide the needed muscle under the basket.

Ashley Torres and Alexa Mueller make up the remainder of the Lady Pirates’ starting unit, and both have started to come on strong, too.

Does Thorpe feel his team is where it needs to be at this time of the season?

“I don’t know,” Thorpe said before turning to one of his assistants. “Coach (Kristin Murray), I think we are about where we should be at this time of the season — don’t you?”

“Yeah, I think so,” Murray answered.