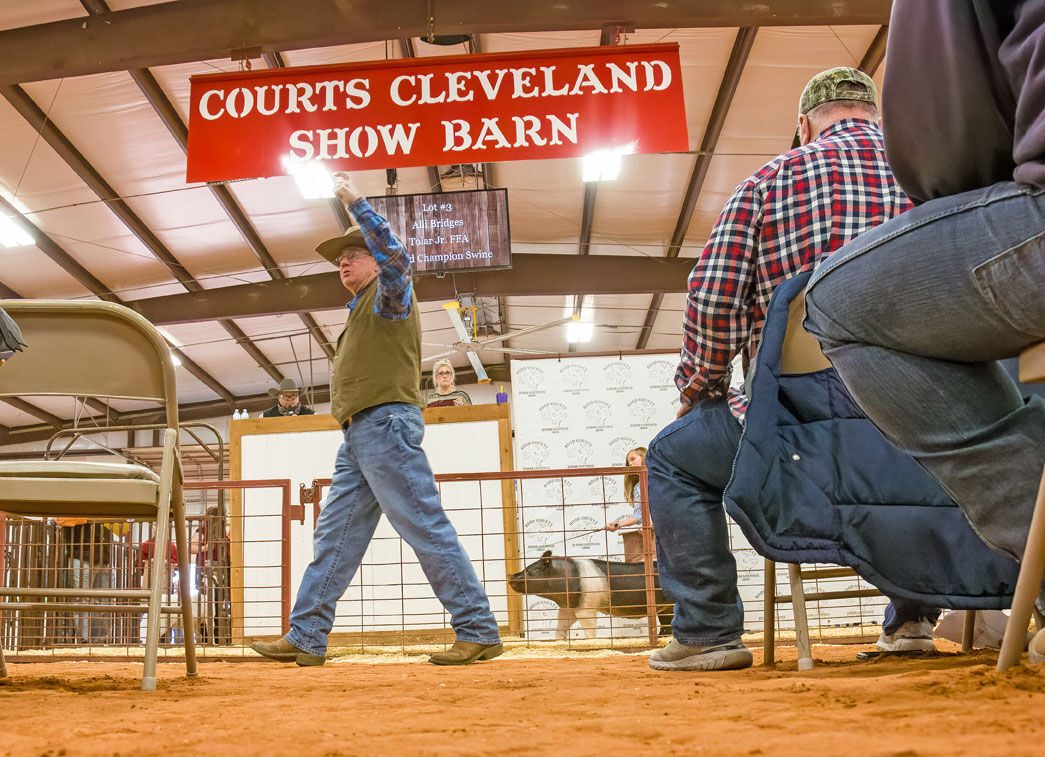 GET THAT BID: An auction worker combs the crowd for bids. 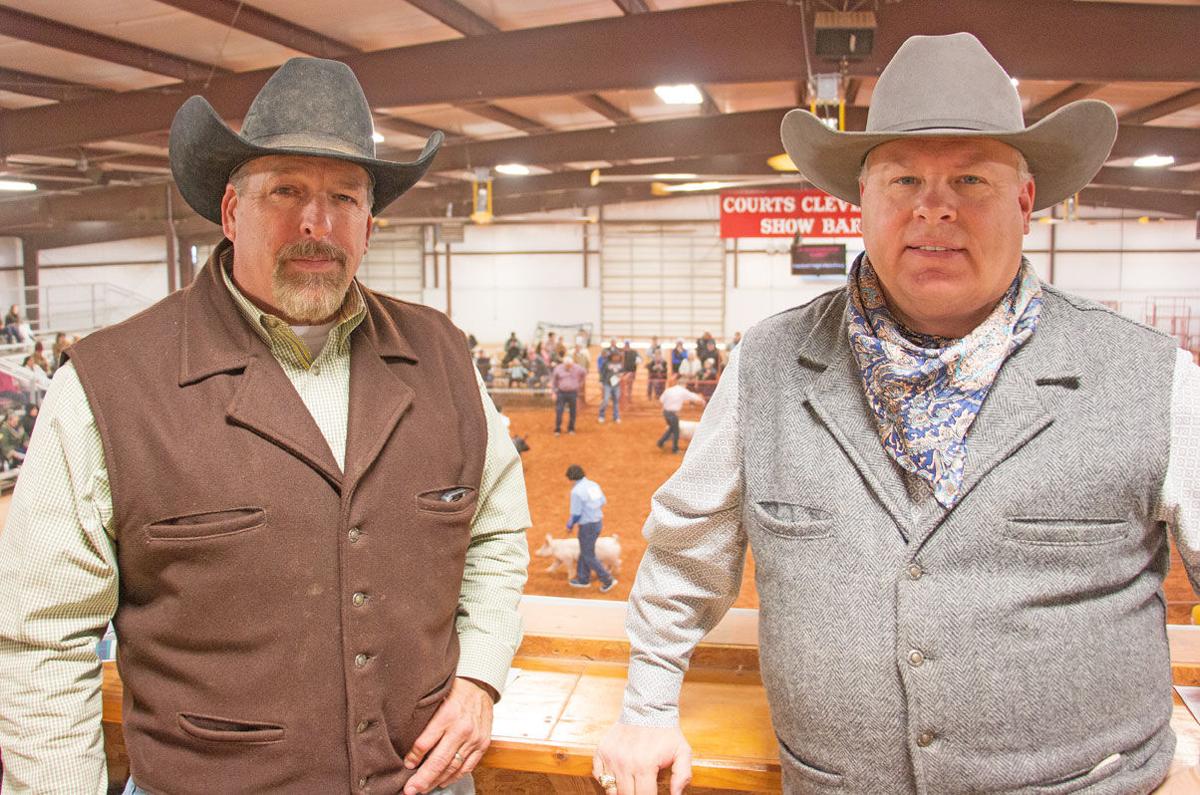 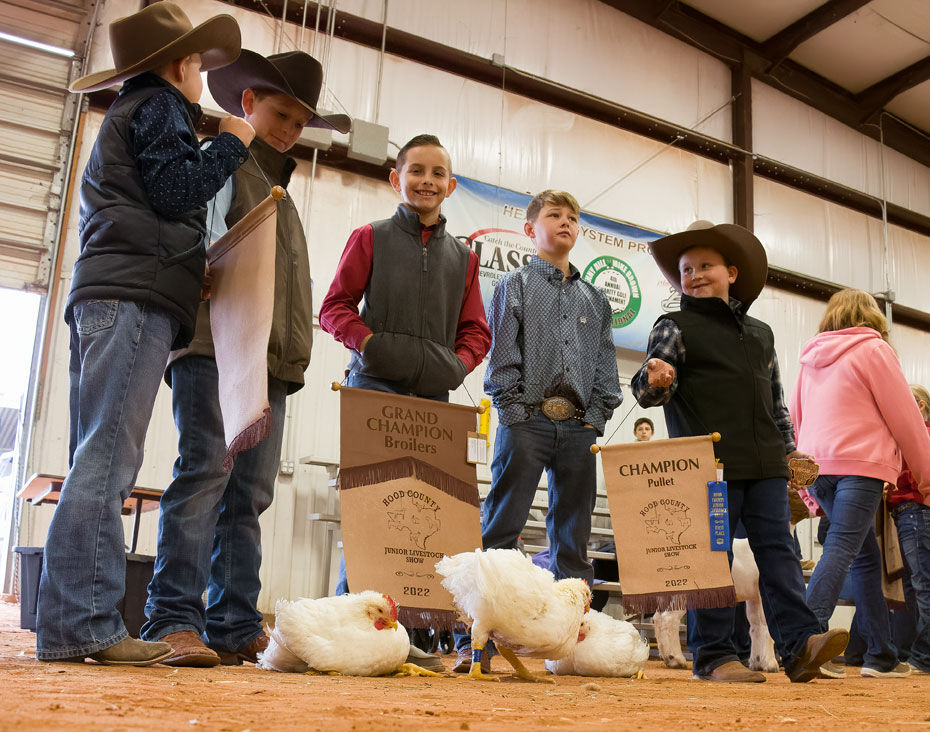 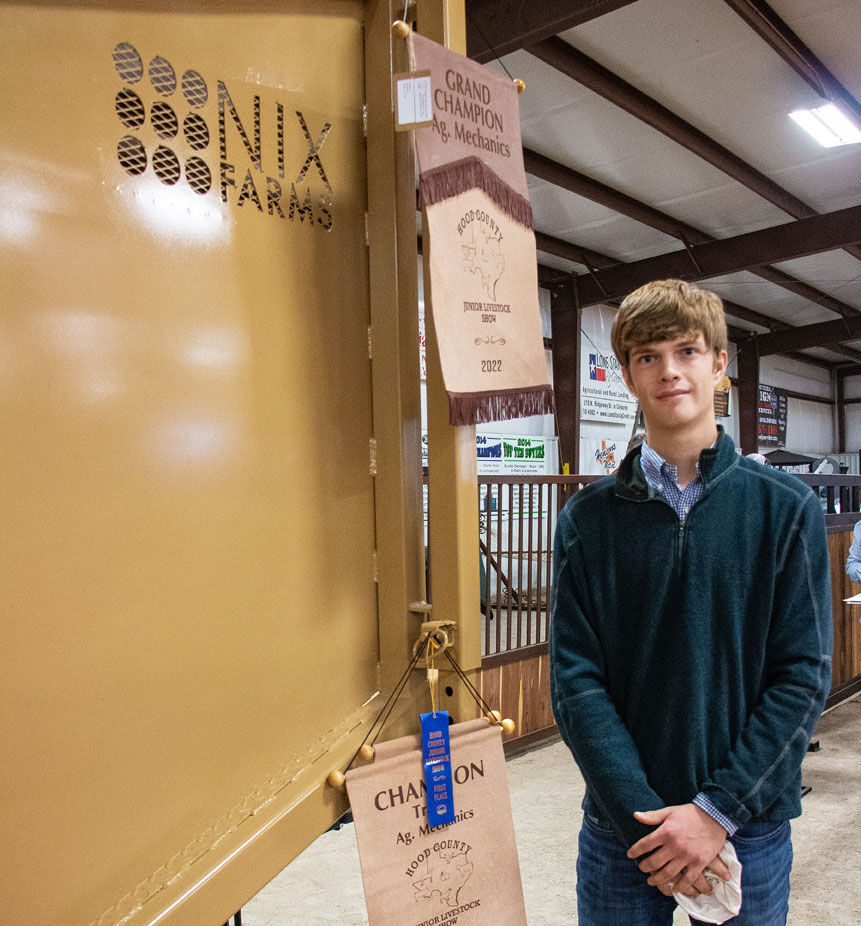 The 67th annual Hood County Junior Livestock Show was a breath of fresh air for the local agricultural community as competitors and buyers returned in force at the Courts Cleveland Show Barn Jan. 4-8 in Granbury.

Gone were the masks due to COVID restrictions, and people were free to breathe in that fresh air tinged with a slight perfume of straw and manure as Mother Nature fluctuated the temperatures.

On Friday, Hood County Livestock Raisers Association president Bobby Davis and Granbury board director Roy Giles were seated in the catbird's seat above the arena floor, taking it all in.

"Last year, masks were a requirement – we did not require them this year. We did put a COVID policy in place to protect ourselves and our exhibitors. This year without masks, it seems to be better, and last year, masks were not well received, but people complied for the most part," Davis said.

The numbers of attendees and competitors don't appear to have changed.

"I haven't seen a difference in the numbers. I think we had just as many people last year – even though we had a few that suggested that they weren't going to come if they had to wear masks. It's pretty crowded," Davis said.

Still, this year's show seemed to be more intense, and the competitors had extra focus when they hit the ring.

"I think the showmanship this year has been exceptional. The competitors have all done an excellent job. It is obvious that they have worked hard. It may be a factor of being in school a little more this year than they were able to last year. I think the show itself has done extremely well this year, and we have seen some talented young men and women," Davis said.

Davis's involvement in stock shows dates back 15 years (nine years in Hood County) to when he started volunteering for the Fort Worth event, and he's seen a good deal of change in the community when it comes to information.

"There have been a lot of technology improvements. Moving everything (records and information) to computers is probably the biggest change that we have seen. It's always a little bit hard to do, but on the backside of it, once you make that transition, it's much more efficient and makes everyone's job just a little bit easier," Davis said. "We have seen some phenomenal projects turned out in our Ag Mechanics competition that are very impressive.:

High school students 30 years ago were tasked with loading and hauling hay and holding "the blue stuff" (medicine) while today's youngsters are hooked up to the Internet and producing improved practical-use farm equipment that makes life easier.

Tolar High School junior Hershel Nix's portable cattle load-out chute was the Grand Champion of the Ag Mechanics show, and it was a combination of practical experiences and research that led to his win.

"It's for my family at Nix Farms my dad, aunt, and Granddad run that," Nix said. "They needed a portable cattle loading chute for loading cattle onto a semi-truck. So, my dad asked me to build one, and I decided that I would enter it into the county show as an Ag Mech project."

Nix began by looking at the problems his family was encountering and the shortcomings of designs he saw online.

"I recognized the issues with the chute we are currently using that we borrowed from a neighbor," Nix said. "I factored that into this design, and I found some plans online that I also used for inspiration. The majority of everything I came up myself."

Stepping toward his project, Nix explained what made his loading chute unique.

"The plans I saw had gaps in the sidewalls, and so does the chute we are currently using. The cattle can see out, and that's an issue because they don't want to go straight up the chute. I also didn't put in a wood floor. Instead, I put diamond plate steel and 7/8th rods for the cattle to grip for traction when they walk up. The important thing about the diamond plate to wood is that it will never rot, and it will last, and we can use it for a long time," Nix said.

Other modifications to Nix's project make it user-friendly for several situations.

"I wanted it to be adjustable (height). One of the biggest issues with the one we currently use is that it's very heavy because it's not well balanced. This one is 10-20% heavier on one side, so when two people are moving it by hand, they can both be on the same side and pull it up and hook it to a trailer," Nix said.

With so much information available and several skilled competitors vying for the top spot, Nix admits being a little shocked by his victory.

"I was surprised at winning," Nix said. "I liked that Reserve Grand Champion project (Wyatt Wienecke, Tolar FFA, road maintainer), and there were a lot of projects that worried me when I saw how good they all were."

Granbury Junior FFA Braden Neal was a multi-award-winner in the poultry competition with a Grand Championship in Pullet, Jr. Showmanship, and Grand Champion Rooster. He topped it all off with a record broiler sale of $6,600.

Neal was hard at work the last two weeks before the show, making sure his flock took in the maximum amount of nutrients.

"The past two weeks before the show, we had to go about four times a day (not including feedings) just to get them up and eating," Neal said.

Where's all that money going?

"It's probably going toward my next project (goat and chickens), and some will go to save for college," Neal said.