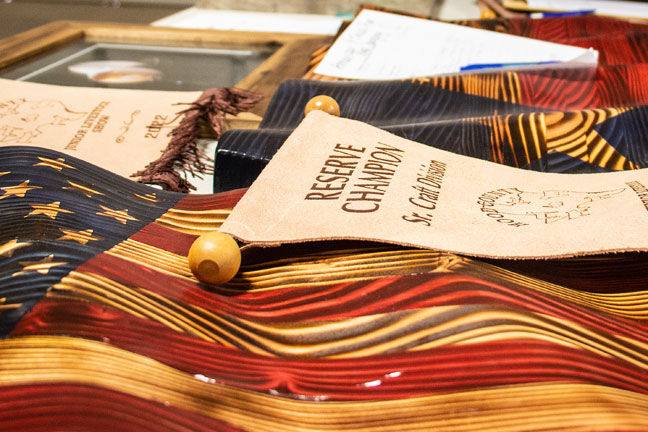 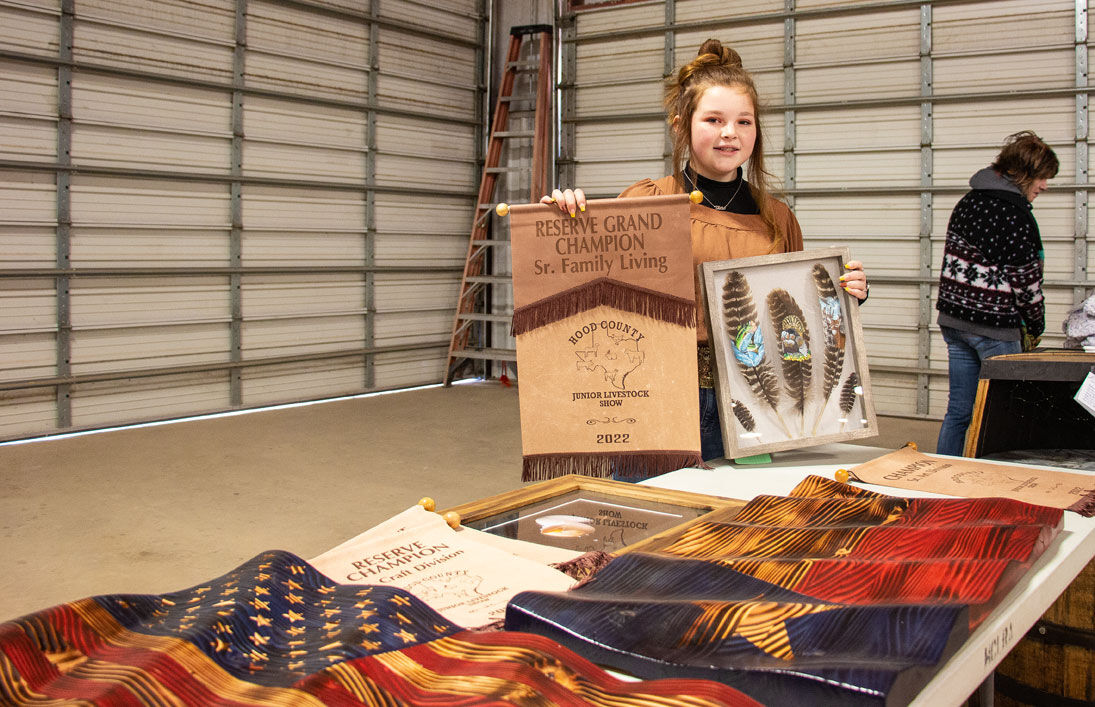 Lake Granbury 4-H sophomore Kelley Sanders was a big winner as she pulled down multiple awards with an eclectic array of exhibits at the 67th annual Hood County Junior Livestock Show Wednesday.

Sanders took time away from her busy schedule (she showed a grand champion goat) to talk about a table laden down with her art projects and the banners that declared her multiple championships from this year's show.

Perhaps her most unusual project is three turkey feathers Sanders has painted with brightly colored animals. The framed project had already drawn a bid of $125 during the silent auction Friday,

"This was actually one of my last-minute pieces," Sanders said. "I had a bunch of different feathers that we had been collecting from our turkeys around the yard. I picked deer, turkey, and bass because those are the big three favorites among hunters. I used reference photos to paint them."

It's a beautiful piece of work for someone who claims to not be a painter.

"I'm not a painter," Sanders said. "This was last minute I really don't paint very well."

The show's judges apparently disagreed with the 2022 senior art champion.

Sanders is talented with a paintbrush, and her artistic skills spill over into photography, where she has begun a series of themed photos surrounding farm life. She has been looking through the viewfinder since she was in third grade.

"Last year, I did a dripping honey photo, and it won champion art division. This photo (a broken dripping egg) is another in that series, which I will continue throughout high school and complete my senior year. It's a farm to table theme. Last year it was dripping honey for bee farmers. This year, it's eggs for chicken farmers, and next year I plan on doing something for dairy farmers," Sanders said.

Her wooden American flags dominate the table, and their wavy pattern is pleasing to the eye.

"I started the flag carving in early December," Sanders said. "They are a mirror image of each other. I glued together 2x4s (13) and then used a scroll saw to create the waves. I sanded it until it was nice and smooth – to where the flags are almost fabric-like."

Sanders has been involved with FFA for the past two years and was in 4-H for seven years, so the stock show is something she is prepared for each year.

"It's great, and I love showing and doing exhibits," Sanders said.