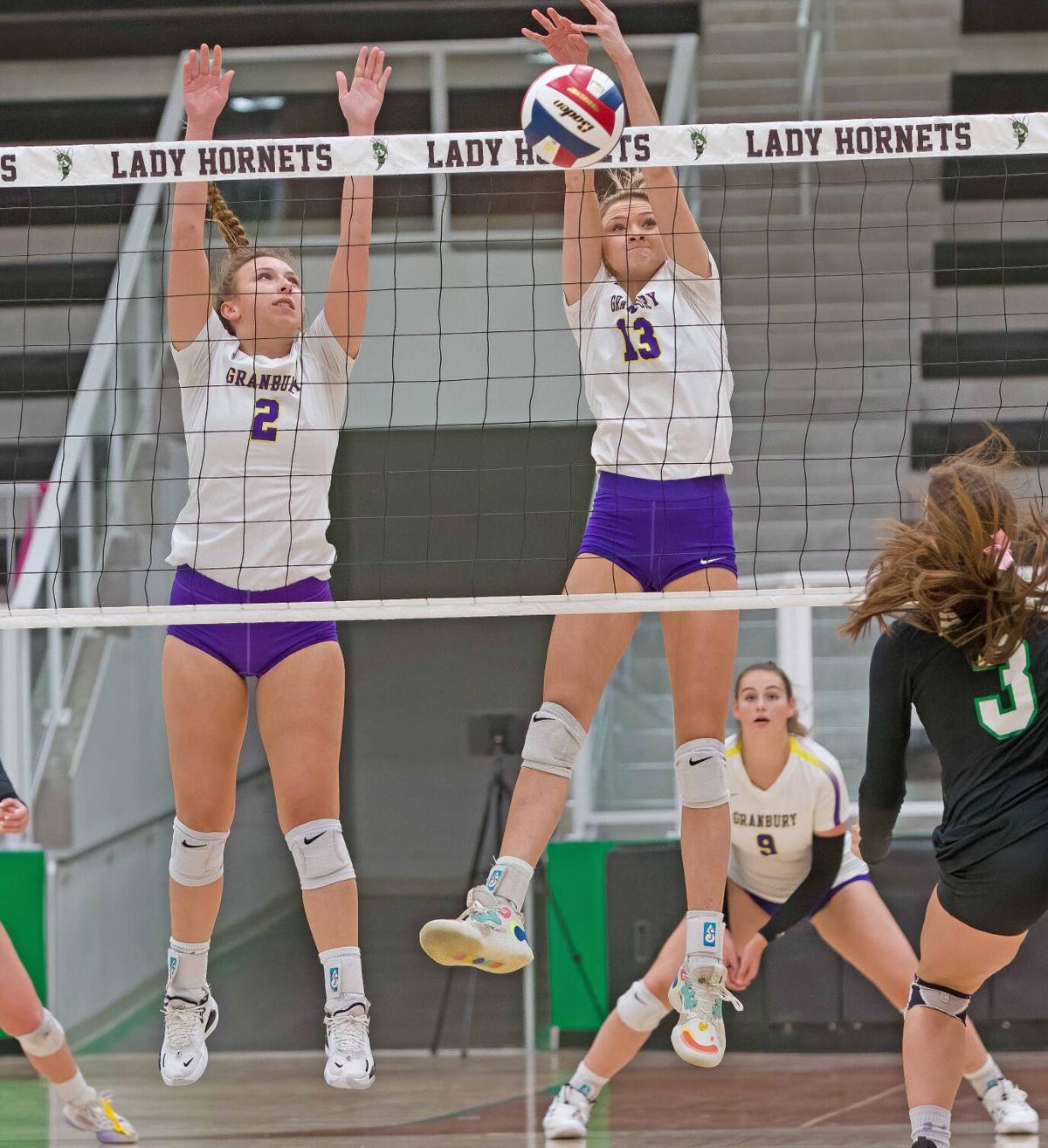 BLOCKED: Junior Kassidy Kirkpatrick had six blocks against Azle to list her season total to 117. 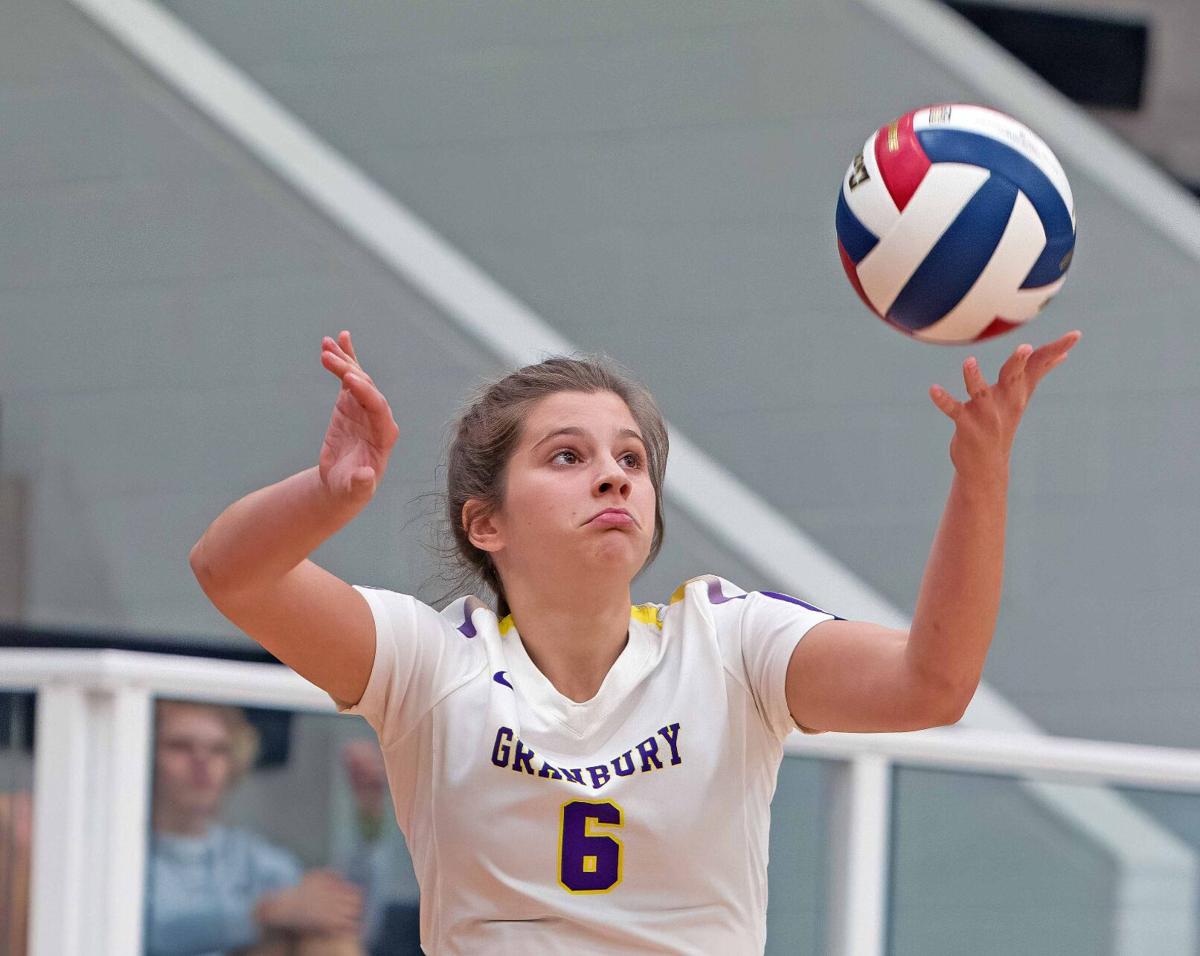 FOCUSED: Kaylee Kirkland eyes the volleyball as she sets up for a serve against Azle. 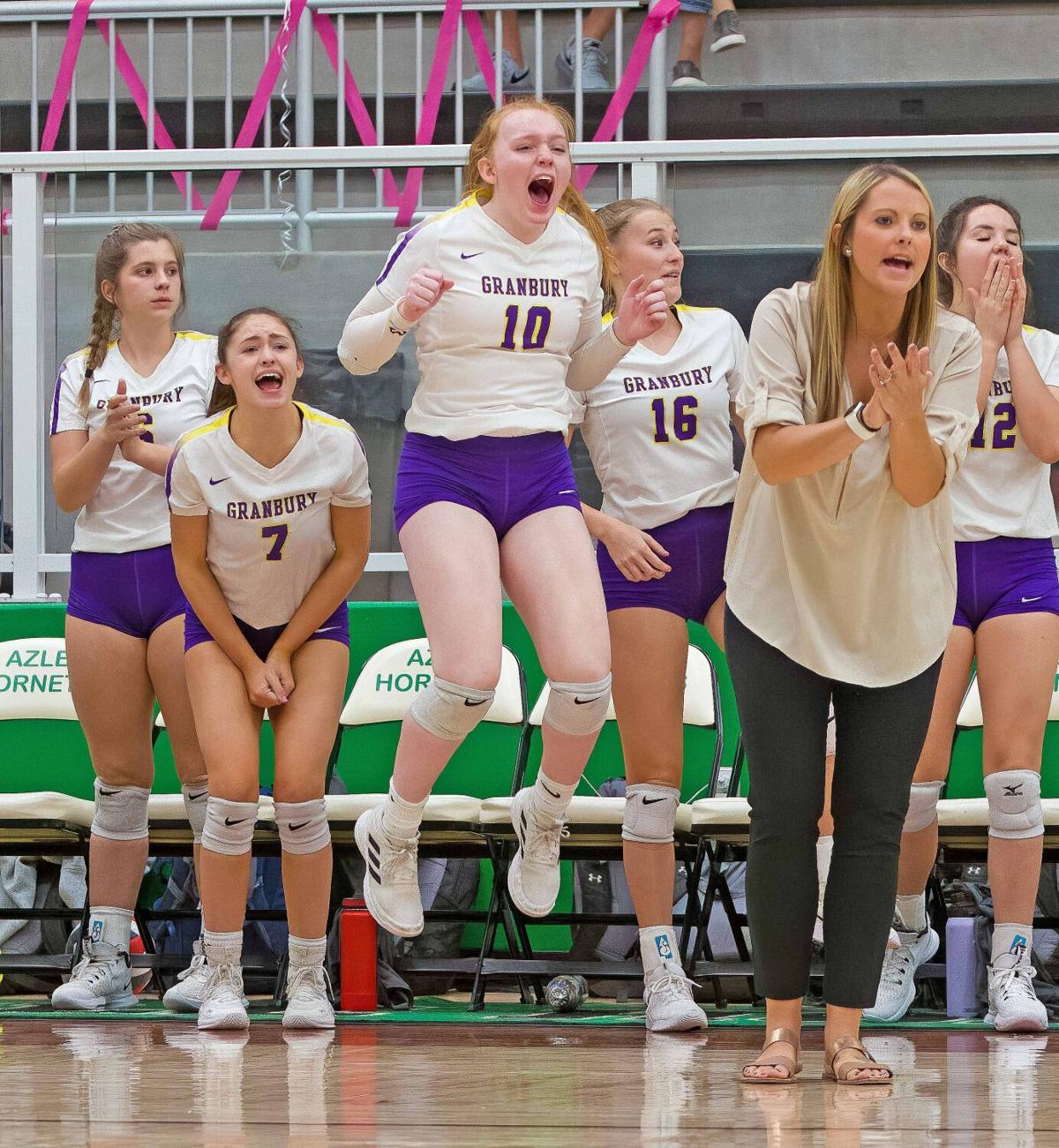 ENCOURAGEMENT: Kimberlee Joyce (10) gets excited as she offers her encouragement to her teammates. 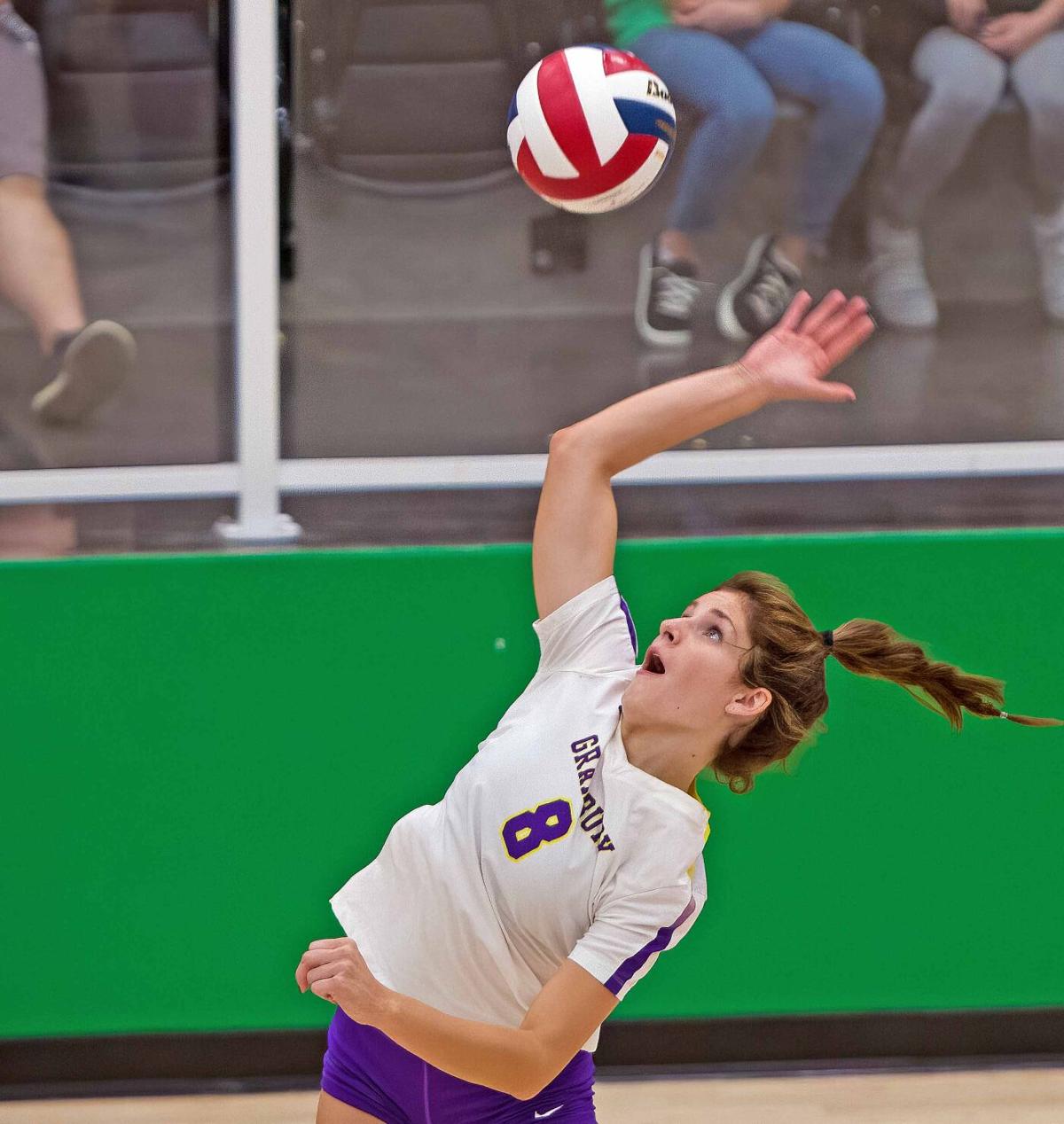 OUTSIDE HITTER: Landry Basil has four blocks and two kills in action against Azle. 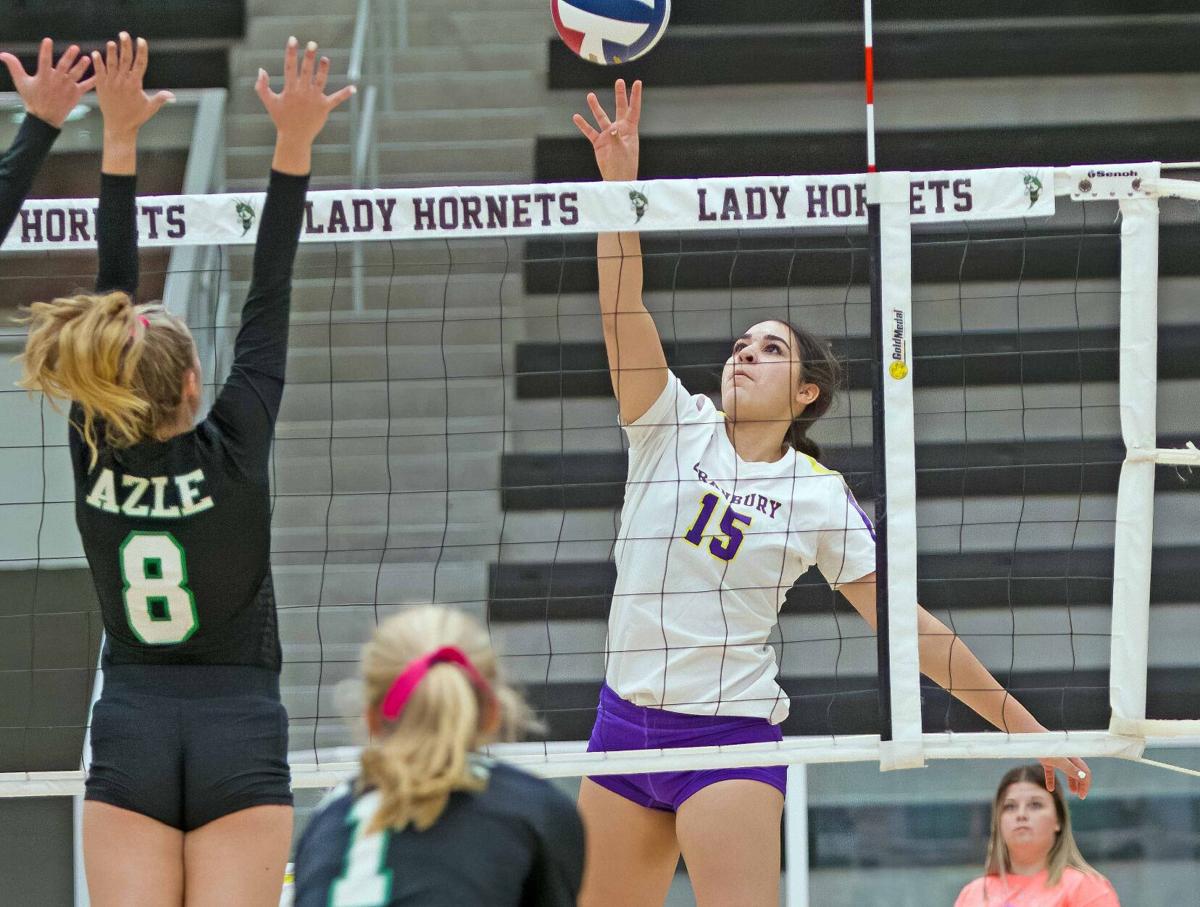 FRESHMAN: Sienna Watts’ was second in kills for Granbury against Azle with nine.

Granbury High School’s Lady Pirates did everything but win their District 5-5A volleyball match Tuesday against Azle, and it wasn't for lack of trying after a slow start.

"There for a second, I was like, 'oh man,' what are we going to do? Are we going to roll over, but they did a great job and battled back," GHS coach Desiree Shahan said. "You could tell there was a moment in the third set (that) was fought for each other, and we were getting excited for our teammates. I am super proud of them. That fourth set, we just let them get on too many rolls."

Nonetheless, Shahan was pleased with the effort and execution her team displayed, and she also took time to talk about the efforts of the seniors on her squad.

"Our seniors have really stepped (up) for us this year," Shahan said. "We have Missy (Varni) coming in who just moved here. She was fresh, and no one knew her, and she stepped in a did a great job, and filled a void we had. Ellie (Alexander) has done a great job of leading the team in kills, and sometimes she has carried us on her back, and she's OK with that.

Landri Basil had four kills and was a force at the net on defense.

"Landri has been a power on our right side, and she has been a great leader for us, too. Sometimes she can be a little timid, but she is growing and coming out of her shell, and she is not afraid to let her teammates know what to do out there," Shahan said. "Kimberly (Joyce) is someone who is always super positive. She is always a great supporter and so excited for her teammates."

Emma Hart's role as a utility player has been challenging, and Shahan realizes it's a job that can change daily.

"Emma has had a hard role for us because she is a utility player, and she has stepped up and done an awesome job in playing those different positions. That can be hard because you don't know what to work on, and she has made so many good transitions for us," Shahan said.

GHS Junior middle blocker and hitter Kassidy Kirkpatrick moved into second on the single-season blocked shot list for the Lady Pirates. Kirkpatrick's six blocks against Azle gives her 117 for the season, which is second all-time to the 133 Mandy Withey recorded in 2017.

Senior hitter Ellie Alexander also topped the century mark for the season against Azle, and currently has 101.

Every time Varni makes a dig, the GHS single-season record for digs goes up and is now at 953 for the season. There's every possibility the senior will top 1,000. Varni had 34 digs against Azle and had 53 the night she set the record.

Alexander is the Lady Pirates' kills leader with 343 while Kirkpatrick has 197 and Nichols has 195. Sophomore Rachel Poirier has come on strong this season and made the most of her time on the court with 162 kills.

Alexander also leads the team in kill percentage with a 33.7 mark, and Kirkpatrick is right on her heels at 33.6.

Granbury was scheduled to play Brewer in a tiebreaker match to determine the fourth playoff seed out of District 5-5A. The results of that matchup will be in the Nov. 3 edition of the Hood County News.