Starting at
$100.00 for 365 days
Get Started
View all rates
You are the owner of this article.
Edit Article Add New Article
You have permission to edit this article.
Edit
Home
News
e-Edition
Diversions
Columnists
Multimedia
Obituaries
Classifieds
Bestof2021
Share This
1 of 9 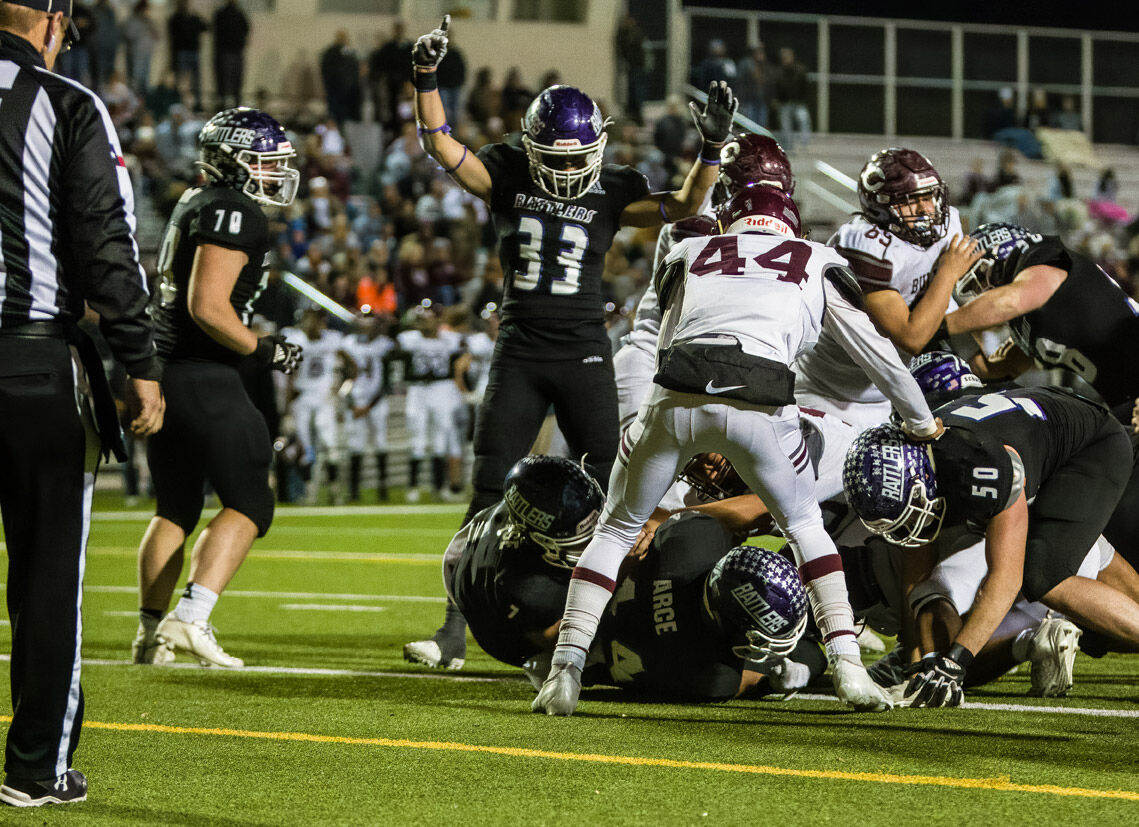 PLOWING IN: Rattler quarterback Jackson LeCluyse had lots of help getting into the endzone. 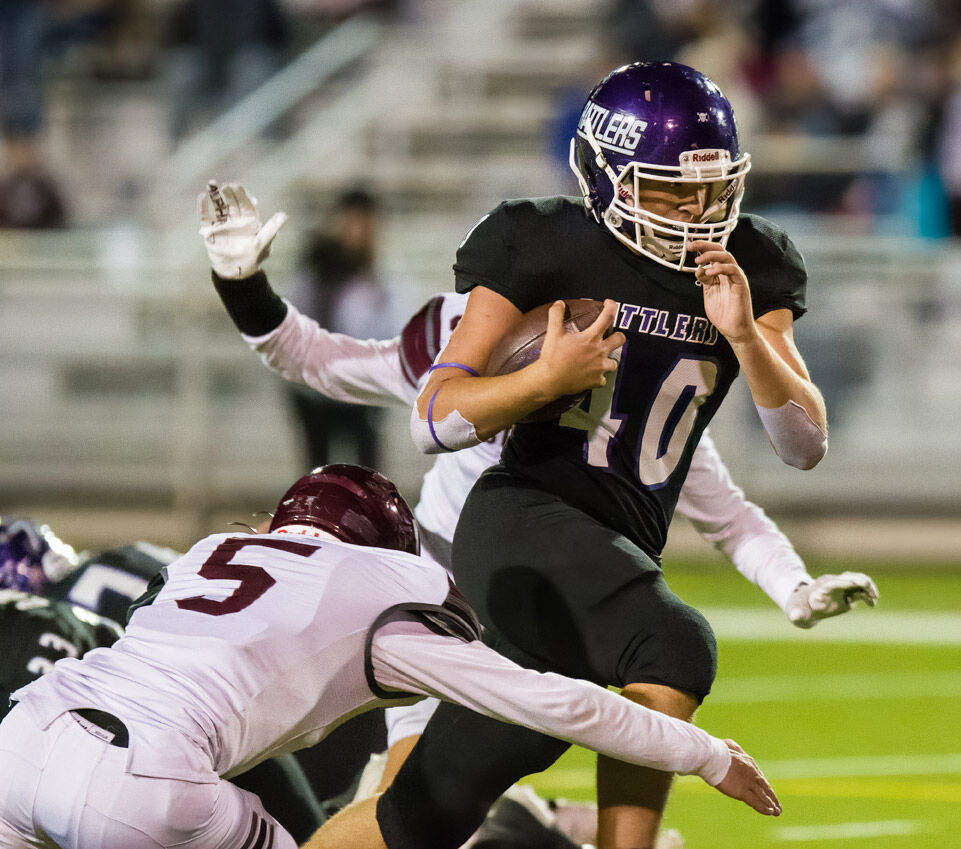 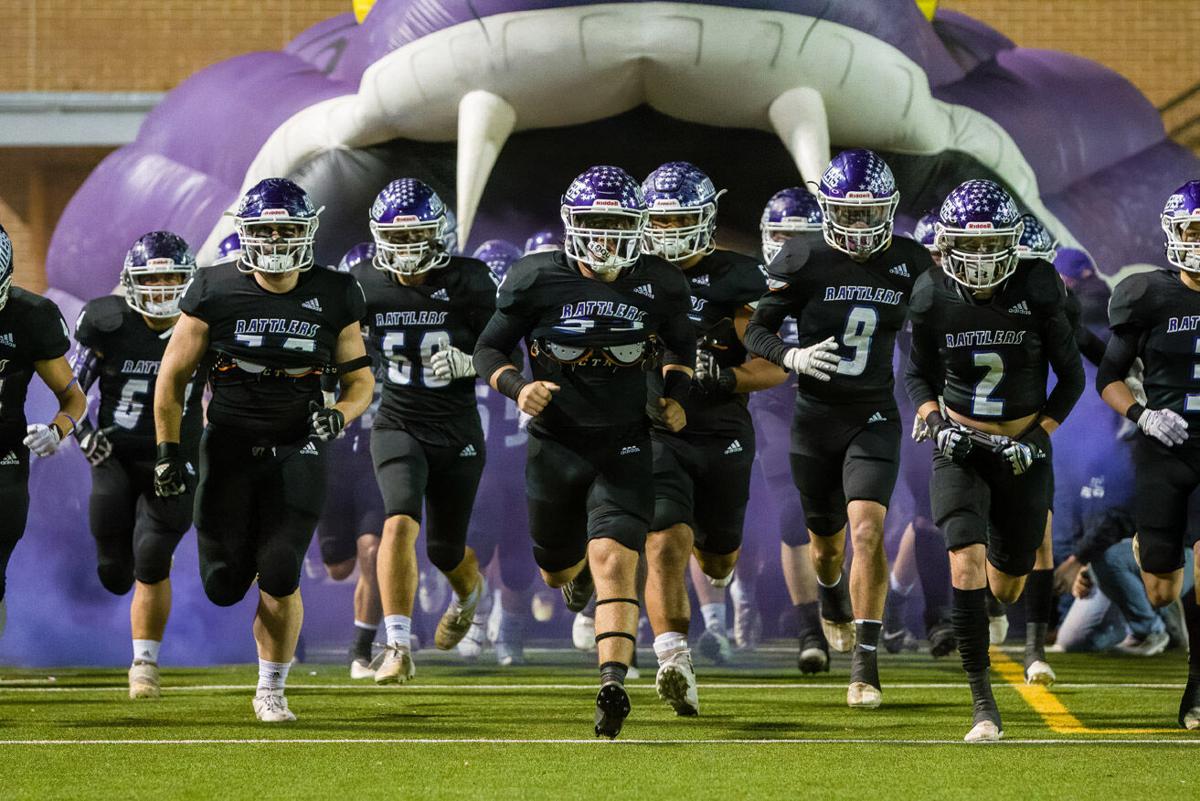 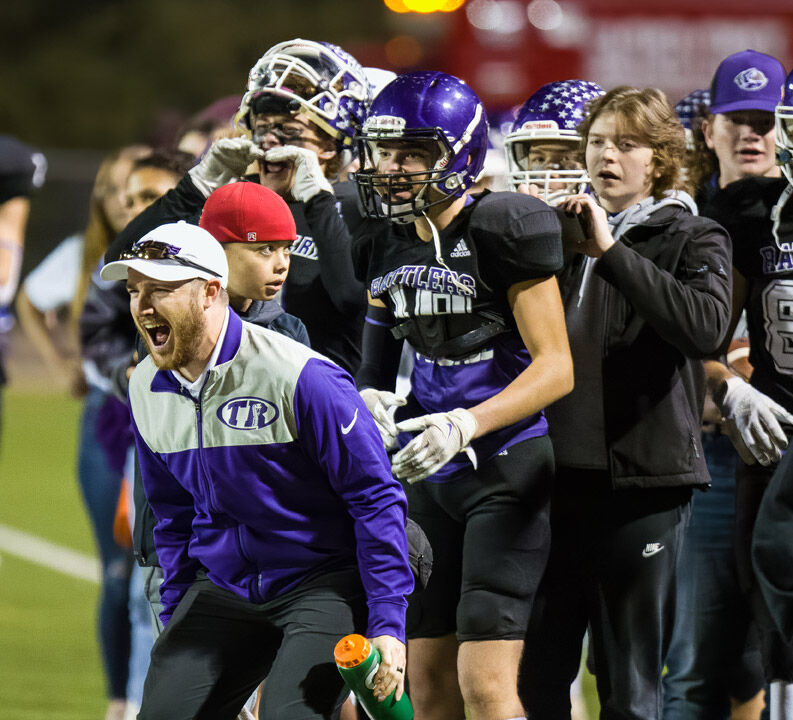 EXCITABLE: Tolar trainer Tristan Hawkins was excited about the Rattlers! 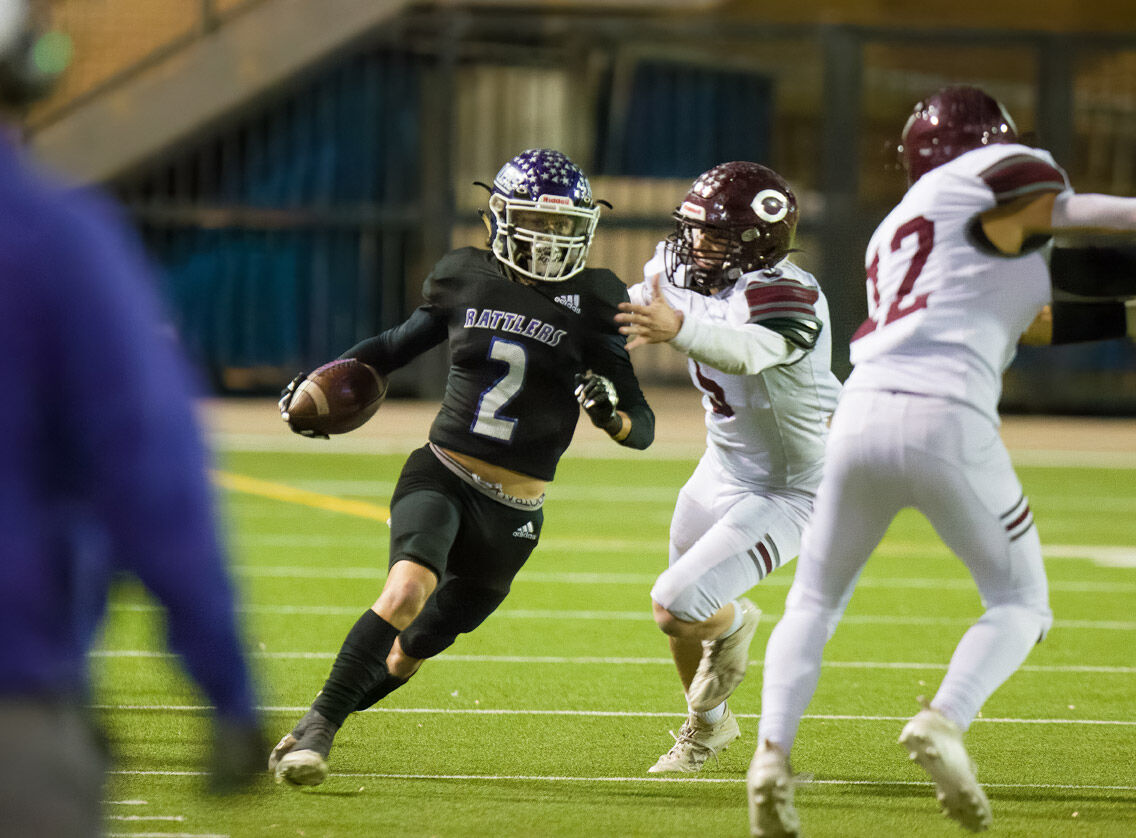 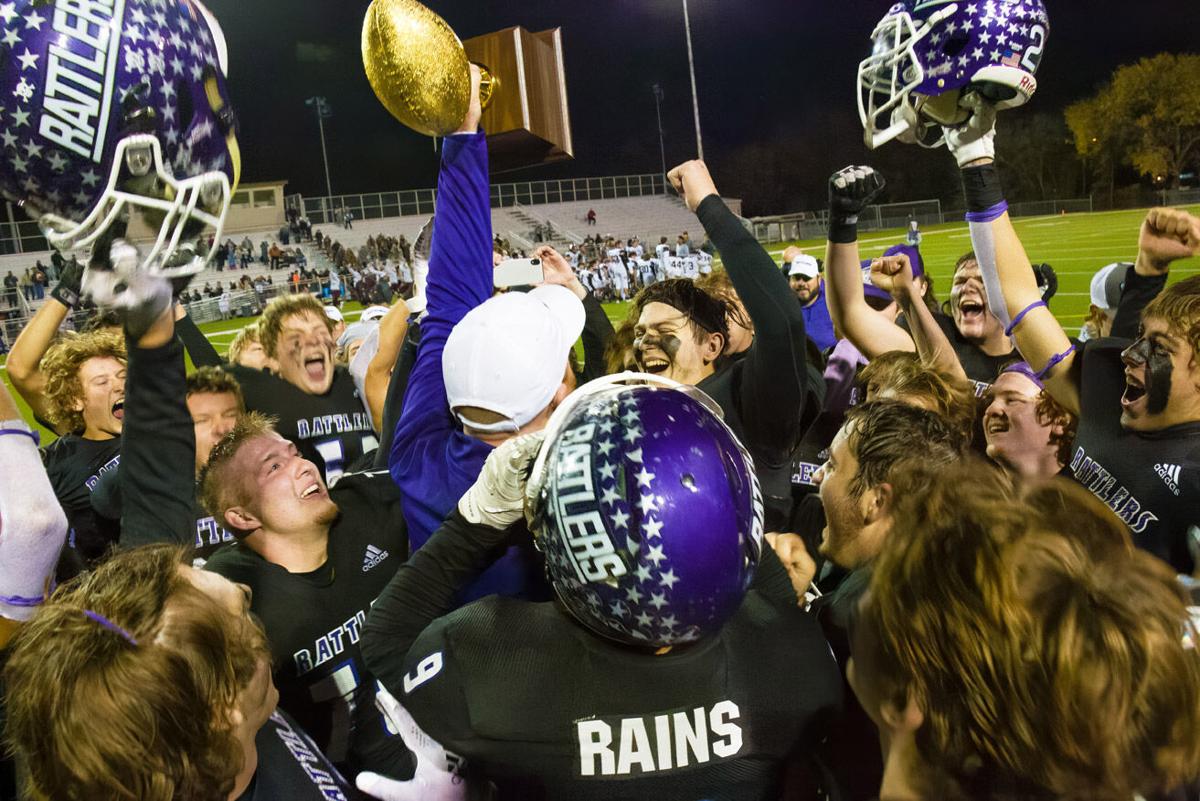 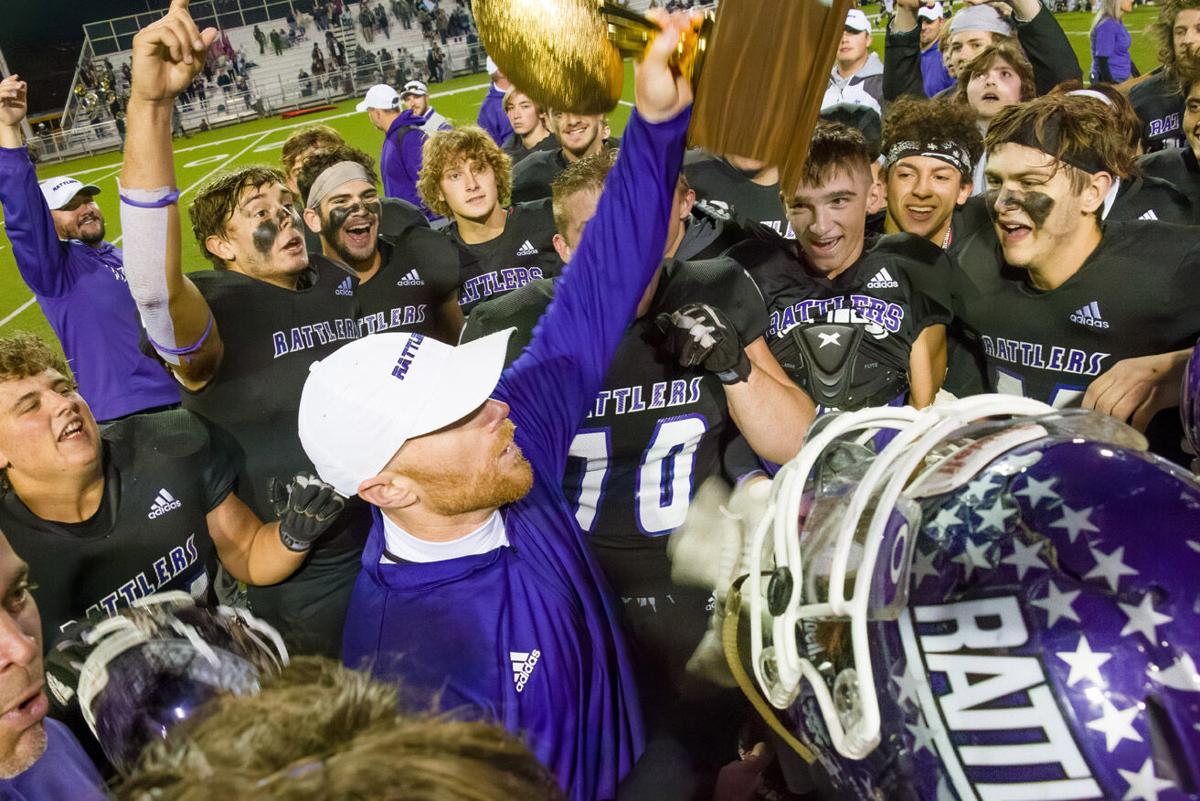 CELEBRATION: Coach Jeremy Mullins hoists the Area championship trophy for all to see. 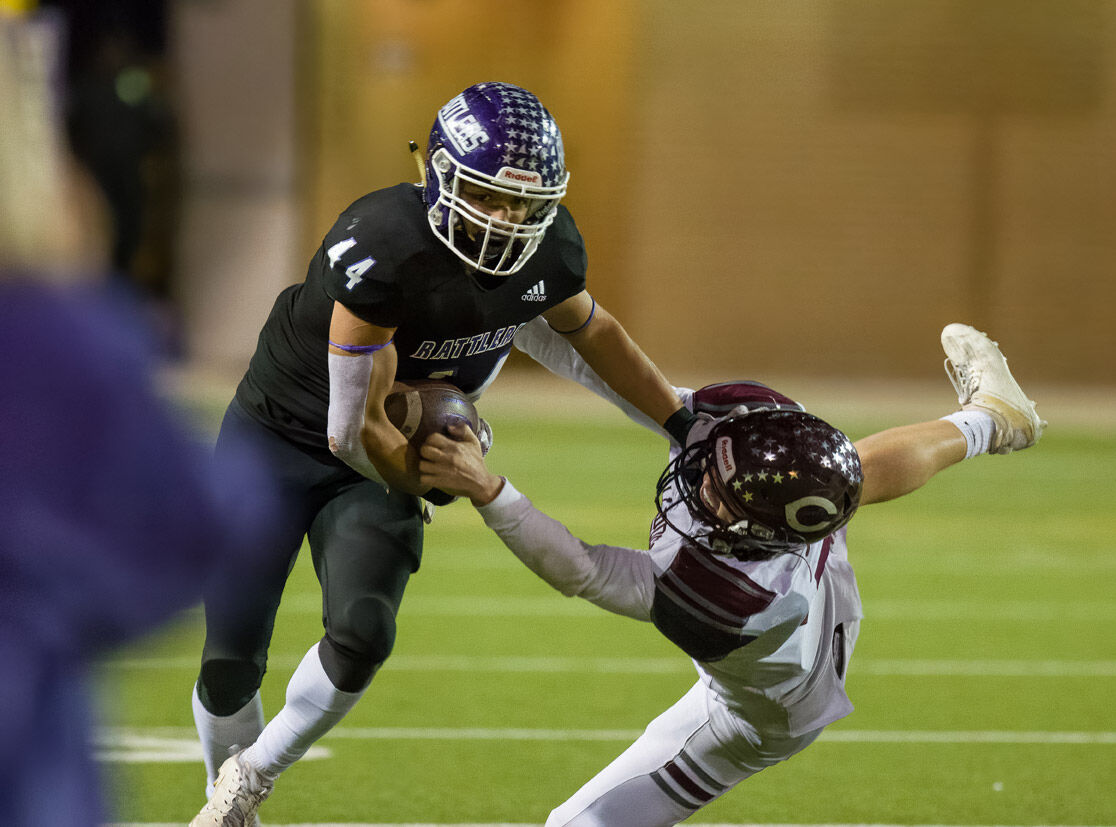 WORKHORSE: The Rattlers put the ball in the hands of Joseph Arce 24 times and he responded with 118 yards. 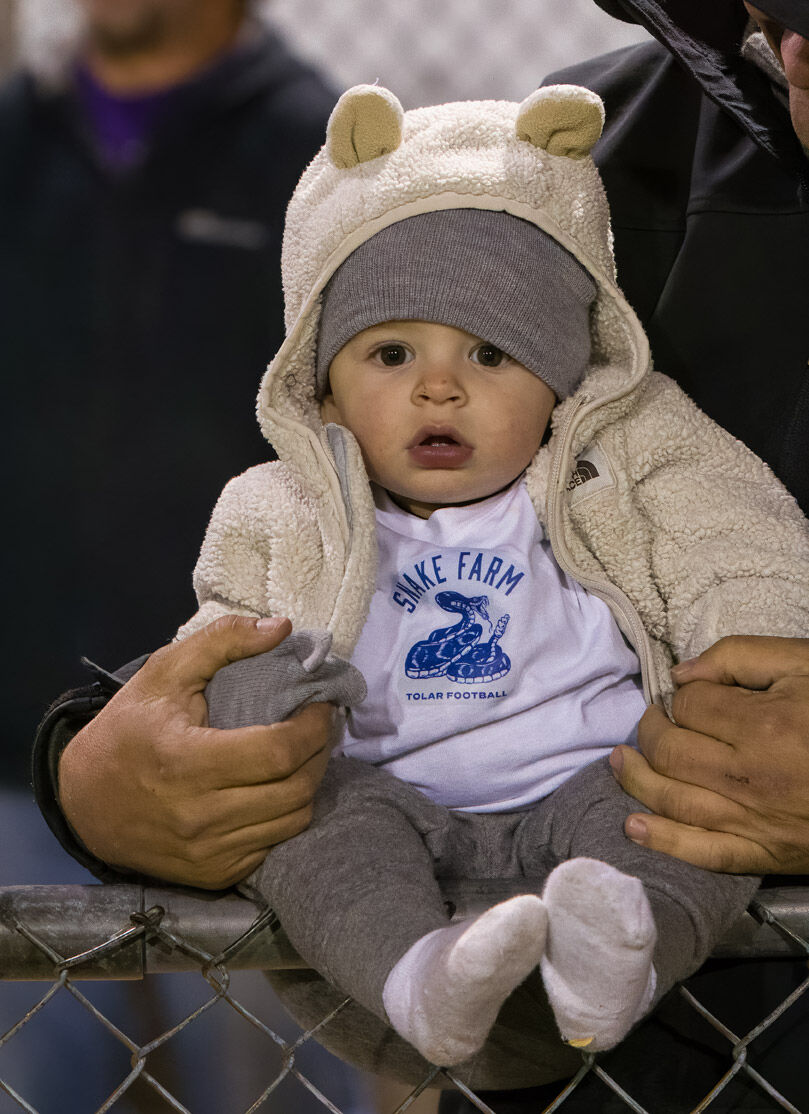 NEVER TOO YOUNG: Tolar "Snake Farm" T-shirts come in all sizes and you are never too young to be a Rattlers' fan.

DENTON--Junior quarterback Jackson LeCluyse roared back from a couple of miscues as he ran for two scores and caught a touchdown pass to lift the Rattlers to a 35-24 win over Cooper as Tolar claimed a Class 2A Area football championship Friday at Bronco Field.

The Bulldogs (11-1) entered the contest averaging 347 yards per game rushing, and Cooper’s triple-option offense produced some big plays, but Tolar’s (10-2) game plan was about consistency.

“You normally don’t get out of those (multiple turnovers) very often,” coach Jeremy Mullins said. “Fortunately, we executed enough, and the defense played just good enough. The further you go, you can’t have those kinds of mistakes. There’s no doubt. But I am super proud of our guys. It could have been really easy to get down a couple of times and let that thing snowball.”

Tolar’s defense was often tested, but the Bulldogs netted just 198 yards on the ground.

There were no doubts in the Rattlers’ field general’s mind.

“We knew we were going to be fine because we were driving down the field every single possession. Those (the fumbles) were the only thing that slowed us down,” LeCluyse said. “We were messing up ourselves. We just kept on driving. We knew that we had to stick with the same game plan and just keep on scoring.”

Cooper got on the board first thanks to a long return on the game’s opening kickoff, and the Bulldogs established a 6-0 lead on a short run by Markel Smith. Smith would be a thorn in Tolar’s side all night as he scored on a 43-yard run and a 99-yard fumble return.

LeCluyse and company responded with his three-yard touchdown, and the first of 5-5 PAT kicks by Wyatt Jones gave Tolar a 7-6 advantage.

It was a lead the Rattlers would uncomfortably never surrender.  Peyton Brown made it 14-6 on a 13-yard carry, but the Bulldogs big-play their way back into contention.

“In my opinion, they got one too many (big plays). Our defense has really been playing well, and I hate to give up any, but at this point, you have to take your hat off to them because they were 11-0 for a reason,” Mullins said. “They have good coaches and players in Cooper. So, tip your hat to those guys and to what they do, but we are glad to be heading home with another gold ball.”

After the Rattlers came up with a takeaway of their own, Tolar dug into its bag of tricks with LeCluyse throwing to Cade Moody. The receiver then found the quarterback on the other side of the field for a 30-yard touchdown and a 28-18 lead.

“I think that catching a pass is even more fun than throwing them,” LeCluyse said. “It was fun to catch that one and run it in. It felt great.”

What were Mullins’ thoughts on “Cool-Hand LeCluyse?”

“Jackson’s been that way for a long time. That quarterback position must go to a level-headed guy if you are going to be consistent, and that’s what he is all the way. He gave one up there (fumble) going in and turned around the next series and did his thing,” Mullins said.

More than anything, it was Tolar’s running game that paved the way to victory. Senior Joseph Arce and Brown ran for 118 yards each, and LeCluyse added 66 more.

“One thing we knew for sure going into this year is that being able to run the football in games like this is going to be huge. We felt like we hadn’t been able to do that in the past, and we had to rely on the pass too much. You get in a game like this, and it’s really nice to be able to get behind that offensive line and hand it off to Joseph Arce or Peyton Brown, and Jackson did a great job tonight,” Mullins said.

The Rattlers got their licks in through the air, too. LeCluyse was 8-10 passing for 101 yards and connected with Jones six times for 63 yards. Arce pulled down a 21-yard reception, Jeffrey Collie had a 30-yard catch, and LeCluyse’s 30-yard TD came off Moody's’ arm.

“Their offense is a tough thing to prepare for, and I thought our guys did well,” Mullins said. “We had a chance to simply put it out of reach, but when you are going home with an area trophy, you have got to be happy and celebrate the win.”

Tolar now moves into the regional quarterfinal round for a date with Marlin (9-3) in Alvarado on Nov. 27 at 7 p.m. and the two teams have had three common opponents this season.