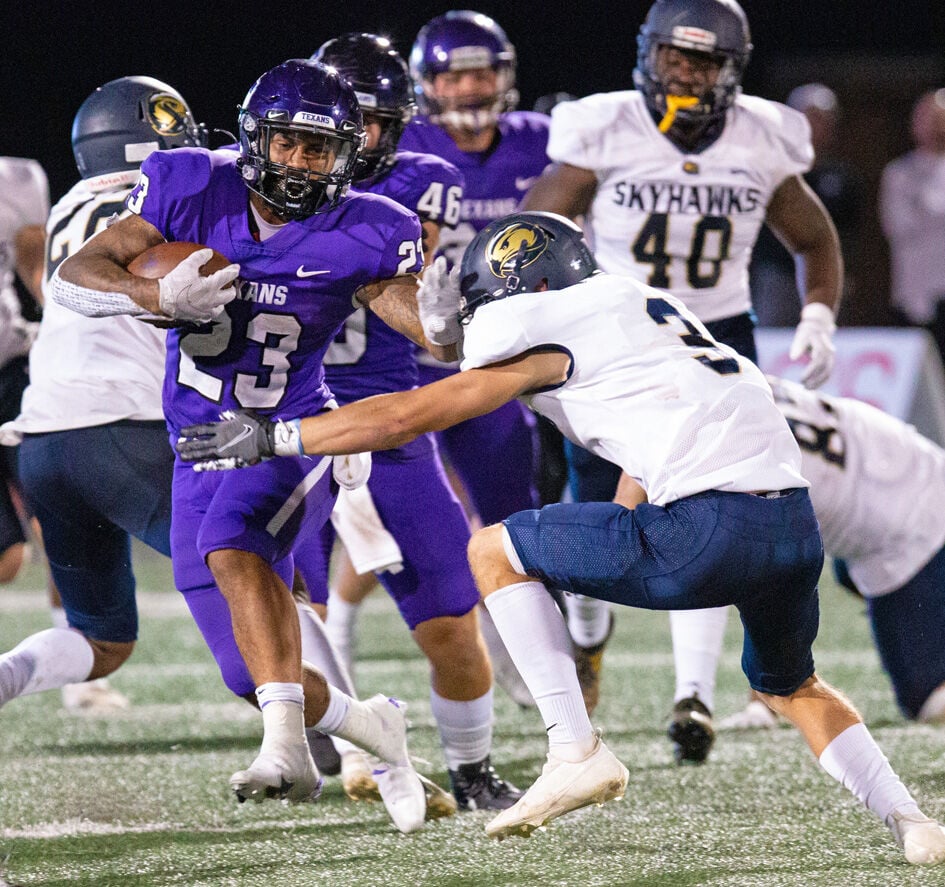 TWO TDS: Daniel Wright Jr. had a pair of scores for the Texans last week. 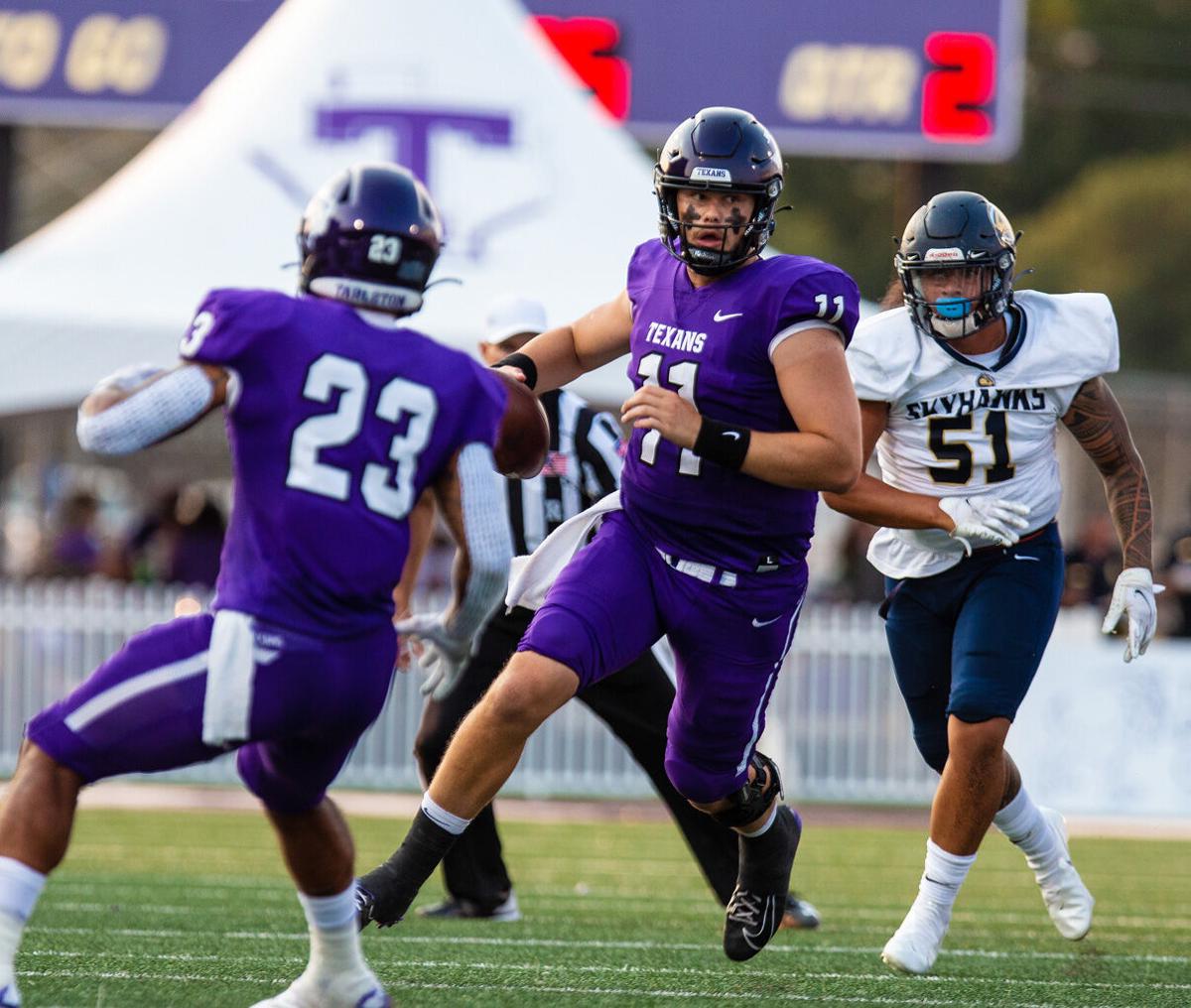 SCRAMBLING: Quarterback Steven Duncan didn't have to scramble much. 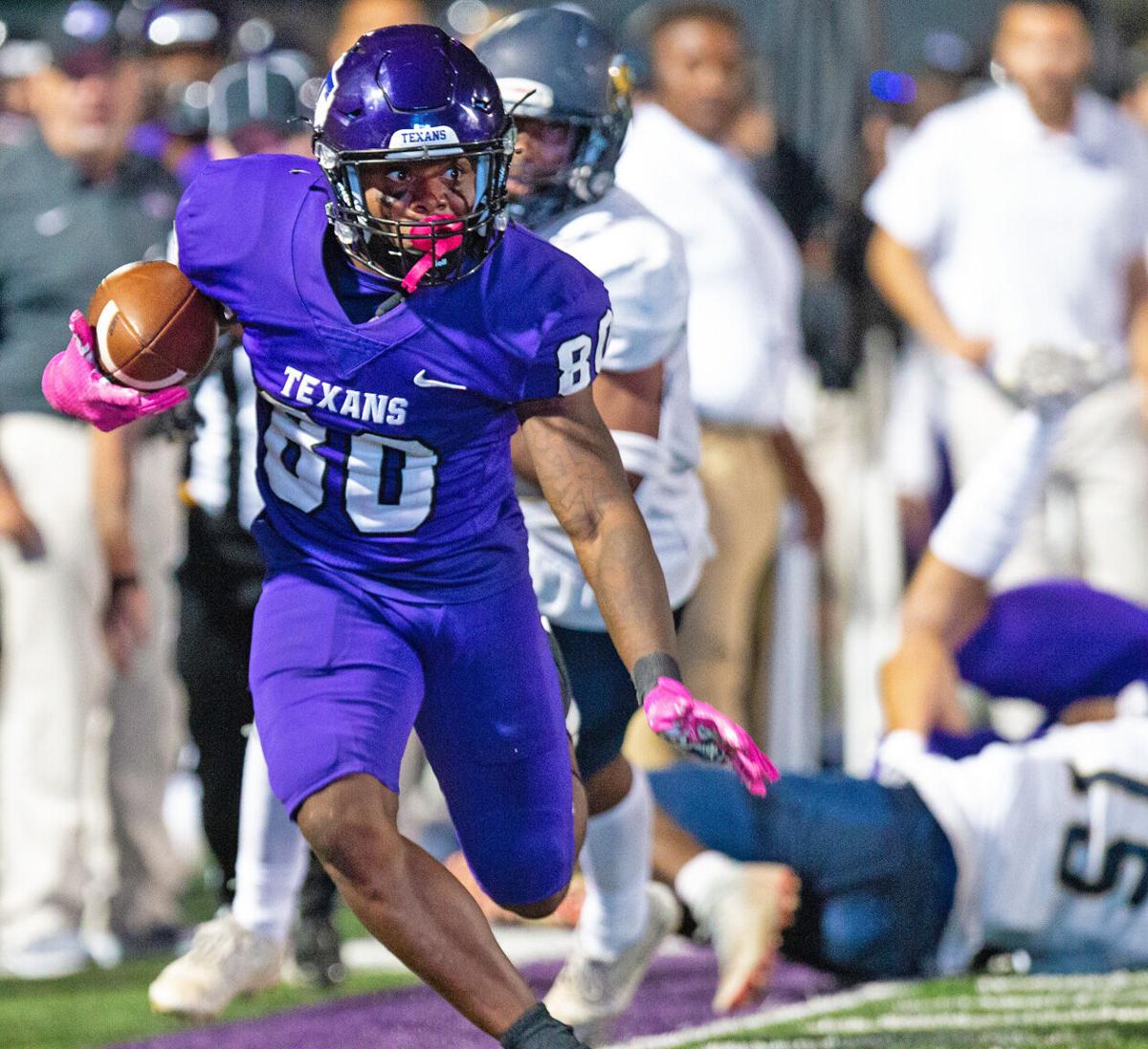 Tarleton will make the former home of MLB's Texas Rangers their own home on Saturday at Choctaw Stadium, formerly known as Globe Life Park. The Texans will host the Southern Utah Thunderbirds of the Big Sky Conference, a program slated to be in the Western Athletic Conference next season, at 6 p.m. CT.

The game will be broadcast on ESPN+, with Kyle Youmans and Richard Bartel on the call. The game can be heard on Tarleton Sports Network at 90.5 FM in Stephenville and surrounding areas, with Byron Anderson, Kyle Masters, Kyle Crews and Keltin Wiens leading the broadcast.

Tickets are available through Major League Baseball's website for $15-$20 at https://www.mlb.com/rangers/ballpark/globe-life-park/events/football.

Tarleton Texan Nation is welcome to join fellow defenders of the purple and white for an official pregame party at Texas Live! ahead of the game.

The event will take place at Miller Tavern and Beer Garden inside Texas Live! from 3:30-5:30 p.m. and will be free admission for all fans with a game ticket for the Tarleton-Southern Utah game at 6 p.m. Fans in attendance can check into the Tarleton Fan Rewards program and receive 500 points, along with chances to win official Tarleton gear and prizes.

Southern Utah has lost five straight games. The Thunderbirds went 1-5 last season in the spring, with all five losses one possession affairs, losing by a combined 15 points (3.0 points per loss).

SUU is coming off a bye after starting the year against two FBS teams, losing 45-14 to San Jose State and 41-14 to Arizona State.

Linebacker D.J. Harris was named the Ticketsmarter WAC Defensive Player of the Week this past week after an incredible game against Fort Lewis, where he posted 13 tackles (six solo), a forced safety, 1.5 sacks, 3.0 tackles for a loss and three quarterback hurries. He leads the WAC with 24 total tackles and 12.0 tackles per game. He's second with 3.5 tackles for a loss, tied for second with a forced fumble, and tied for third with 1.5 sacks.

Tarleton is facing off against Southern Utah at Choctaw Stadium in Arlington, Texas. The stadium, formerly named Globe Life Park, was the home of Major League Baseball's Texas Rangers for 26 seasons from 1994-2019.

During that span, baseball was of course prevalent. The stadium hosted 2,081 regular season and 25 playoff games, including the 2010 and 2011 World Series. The MLB All-Star Game was played there in 1995. The last MLB game there was the Rangers against the New York Yankees on Sept. 29, 2019. According to the Rangers, 66,005,370 fans attended regular season and postseason season games at the venue.

Saturday's content between Tarleton and Southern Utah may not have the big matchup intensity yet, but this could certainly be the start. This marks the first ever meeting between the two programs of what should be many. Southern Utah has already committed to join the Western Athletic Conference, as this marks the Thunderbirds' last season in the Big Sky Conference. Tarleton and Southern Utah will begin a normal home-and-home rotational schedule next season as they will start annual meetings.

RETURN OF THE RUN GAME

Tarleton's running game in the season opener was not up to the Texan standard (70 yards as a team on 24 attempts). Head coach Todd Whitten said they abandoned the running game too quickly against Stephen F. Austin, and wanted to make it a priority against Fort Lewis. You could say it was a priority, all right.

The Texans ran the ball in 58 percent of their plays on Saturday, totaling 46 carries out of their 79 plays on offense. They finished with 347 yards, averaging 7.5 yards per carry as a team, to go with five touchdowns on the ground. It was the first time the Texans had five rushing touchdowns in a game since they hosted Azusa Pacific on Nov. 17, 2018, and Tarleton's first 300+ rushing yard game since recording 351 yards rushing against William Jewell on Nov. 8, 2019. The team record for rushing yards in a game is 406 (vs. New Mexico Highlands on Aug. 26, 2004).

Four players had 50+ yards rushing for the Texans in the game...

Daniel Wright Jr.: 115 yards on 14 carries (8.2 yards per carry). It was his best game at the NCAA level, surpassing his 91-yard performance while with Weber State against Southern Illinois in an FCS playoff game. He's averaging the second most rushing yards per game in the conference at 78.0, trailing only Sam Houston's Ramon Jefferson (148.0 per). He'd have the 23rd most total rushing yards across FCS (156) if not for reclassification.

Jayy McDonald: 92 yards on 10 carries (9.2 yards per carry) and two touchdowns. It was his first game with multiple touchdowns at the NCAA level, and his first touchdown overall since Oct. 26, 2019 (against FIU while with Middle Tennessee State). He's averaging the third most rushing yards per game in the conference at 63.0, behind Sam Houston's Ramon Jefferson (148.0 per) and teammate Daniel Wright Jr. (78.0 per). He's tied for second in the conference in rushing touchdowns with teammate Khalil Banks, only behind Jefferson (three).

Khalil Banks: 53 yards on seven carries (7.6 yards per carry) and two touchdowns. In one game, he doubled the number of touchdowns he had in 2020, marking his first multi-touchdown game since Sept. 28, 2019, at UT Permian Basin.

Ryheem Skinner: 50 yards on eight carries (6.3 yards per carry) and one touchdown. Marked his 10th career rushing touchdown at Tarleton.

LB D.J. Harris was just named the Ticketsmarter WAC Defensive Player of the Week for his dominant performance against Fort Lewis last Saturday. Harris had 13 tackles (six solo), a forced safety, 1.5 sacks, 3.0 tackles for a loss and three quarterback hurries. He leads the WAC in tackles per game at 12.0, a mark that would put him tied for fifth in the FCS, if not for reclassification. His 1.5 sacks are tied third most in the WAC.

Defensive Coordinator Marcus Patton has done wonders for the Tarleton defense since he came to Stephenville, and this season is no different. Through two games, Tarleton is allowing 13.5 points per game, 3.1 yards per carry, 290.0 total yards per game, has two turnovers and seven sacks. They've allowed 21 points or fewer in seven straight games, Tarleton's longest such streak since 1990-91 (10 straight games).

On Saturday against Fort Lewis, Tarleton allowed just 188 yards of total offense, 3.1 yards per play (103 yards passing, 85 yards rushing). They also forced a safety and two fumbles. Under Patton, this was the ninth time the Texans' opponent had fewer than 200 yards of total offense -- Tarleton is a perfect 9-0 in those games.

The special teams unit had a great game on Saturday in almost every facet. Punter Jake Walrath had three punts, averaging 46.7 yards per boot, as he pinned the Thunderbirds inside their own 20-yard line twice. One of those he placed perfectly at the 1-yard line, which led to a Tarleton safety to put the Texans ahead 16-7.

Kicker Adrian Guzman saw plenty of action in the home opener, kicking the ball 17 total times (one field goal, seven extra points, nine kickoffs). Fort Lewis only attempted one kick return on him, while the freshman nailed all eight of his kicks through the uprights, including a 24-yard field goal.

DB Devin Hafford said in the preseason how much he was looking forward to the season opener against SFA. In the 2019 season opener at SFA, he suffered a season-ending injury in the first quarter. He wanted to prove himself in this game in particular, and that he did.

Hafford had two fumble recoveries, one on the defense's opening series of 2021, which led to Tarleton's lone touchdown on the day. The other came immediately after Tarleton missed a field goal in the second quarter, quashing all momentum SFA had earned from their goal-line stop. He also added a pass breakup and three tackles.

Hafford is the only Tarleton player in at least the past 10 years to recover multiple fumbles on defense in a single game. Among FCS players, Portland State's Tyreese Shakir (Week 1), Northern Colorado's David Hoage (Week 2), Northern Iowa's Spencer Cuvelier (Week 2) and Southern Illinois' Gianini Belizaire (Week 2) are the only other players on defense to recover 2+ fumbles in a game this season. Only two FBS players have recovered 2+ fumbles in a single game this season.

Tarleton is in its second year of a four-year transition period to being a permanent NCAA Division 1 school. In its first year at the Division 1 level in the 2020 season (held in the spring of 2021), the Texans finished 5-3, winning their first game against an FBS school with a 43-17 walloping of New Mexico State at a neutral location on Feb. 21. The Texans also knocked off four wins in a row from March 6-27, scoring 33+ points in each contest while allowing an average of 12.5 points in the span.

Many are calling the Texans' 2021 schedule Tarleton's toughest in school history, including head coach Todd Whitten himself, with eight of their 11 opponents NCAA Division 1 teams. Tarleton has five games against WAC opponents, next against Dixie State on Oct. 16.

Most players will say it doesn't matter what's predicted about them before the season starts, since they have to prove it on the field. But it sure is nice to be on notice before the games even get under way.

Quarterback Steven Duncan is back for his second season at Tarleton and has started the first two games of this season. He threw the first TD pass by a WAC player in nine years with a 12-yard strike to J.F. Thomas in the first quarter of the season opener, finishing with 219 passing yards on 21-of-33 passes, also adding three interceptions.

THE BEST IN TEXAS

Since the start of the 2018 football season, there has not been a better scholarship football program in the entire state of Texas than Tarleton State University. The Texans enter Saturday's game with 28 wins since the start of 2018, the most wins in the state by an NCAA Division I or II program. The list of the top scholarship programs in Texas over that span are as follows:

UP NEXT FOR TARLETON

Tarleton will return to Memorial Stadium back in Stephenville to play host to New Mexico Highlands on Saturday, Sept. 25, at 6 p.m. CT.