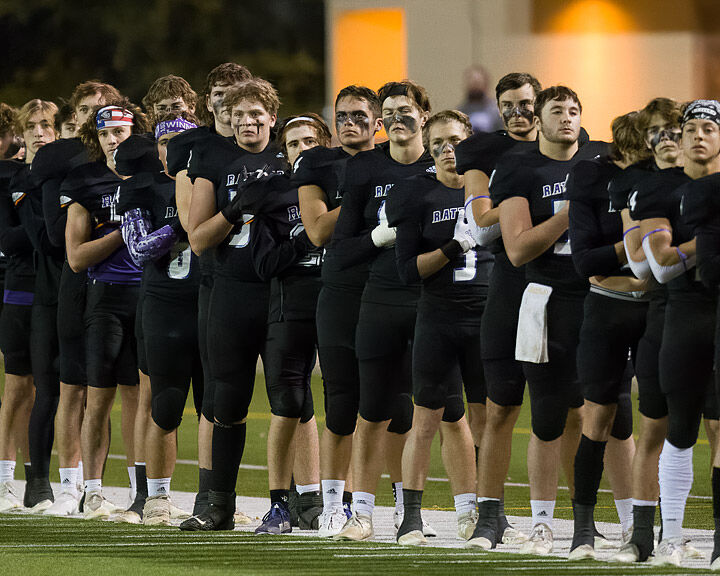 THE RATTLERS: Members of the Tolar Rattlers football team honor America during the National Anthem. 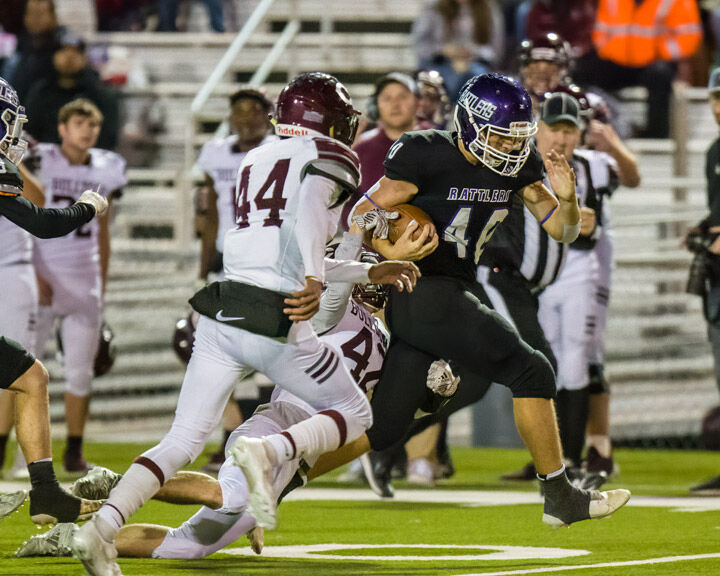 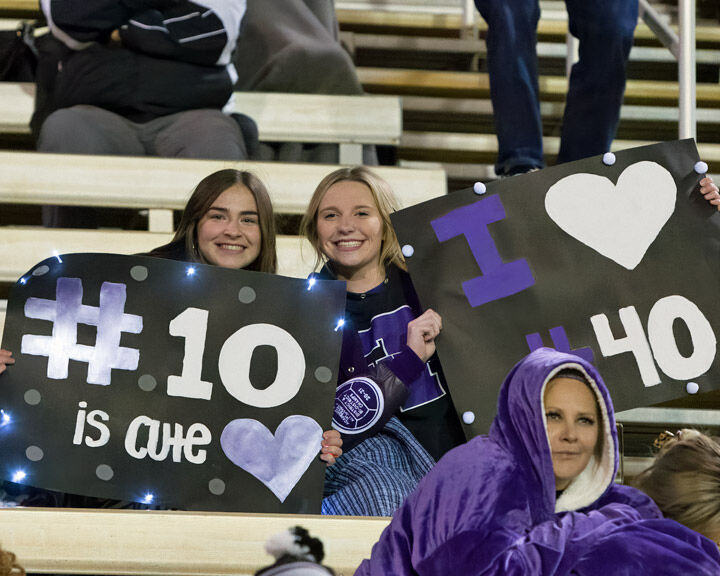 LOVE IT: Tolar's football fans are ready for more. 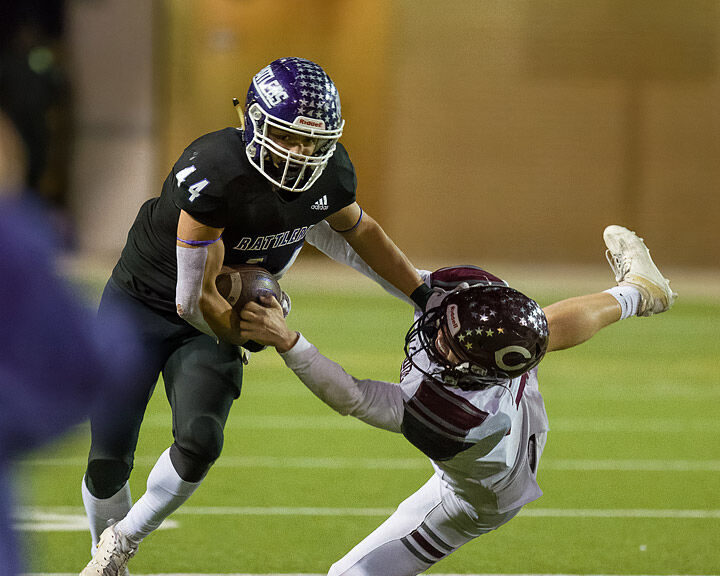 CUTTING LOOSE: Joseph Arce slips away from a tackler. 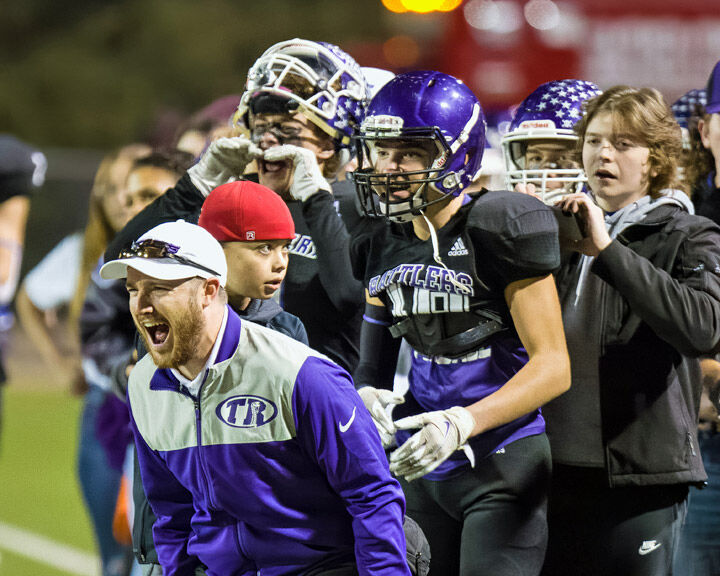 EXCITED: Tolar trainer Tristan Hawkins gets excited about the Rattlers.

The high school football teams you remember play in December.

"That's all we are looking at – playing in December," Tolar head coach Jeremy Mullins said.

On Tuesday morning, Mullins and his staff broke down the Rattlers' football machine and put it all back together. Most of the practice didn't focus on passing, running, or digging into Tolar's bag of tricks as much as it did on the basics of football.

Most of the work focus was about running through the Rattlers' blocking schemes, over and over and over. Tolar (10-2) is preparing for its Class 2A area playoff game this Friday, Nov. 27 in Alvarado, against Marlin High School (9-3) and the almost 6,000 yards of offense the Bulldogs have compiled this season.

"I'm not sure of the exact saying, but it goes along the lines of if you do something 10,000 times, you become an expert at it. It becomes second nature for you, and that's what we are trying to achieve here," Mullins said.

From where does that back-to-the-basics philosophy come?

"That's the only thing that I know to do. I'm not the smartest coach in the world. It's all about keeping it simple," Mullins said. "I have been around and taught by some good people, and you have to keep doing the little things throughout the year. We probably don't do it as often this late in the season."

Marlin presents the best passing quarterback the Rattlers have seen this season in junior quarterback Desmond Woodson, who has thrown for more than 3,000 yards this season. He has 30 passing touchdowns to his credit with just five interceptions.

"Marlin is balanced, and they are very athletic on offense and defense. When you get to this point in the year, you are going to be going up against good teams," Mullins said.

The Bulldogs have an equally effective running game that rang up more than 2,600 yards rushing, led by Ty Harris with 1,123 yards. Marlin has several running backs capable of big-play offense, and Woodson is a dual-threat, with his 465 ground yards coming at 9.2 yards per carry.

But the Bulldogs’ biggest playmaker is wide receiver Trajon Butler, who has caught 48 passes for 1,166 yards and 14 touchdowns. He has also carried the ball 33 times for an astounding average of 19.1 yards per carry. Add in Derion Gullette's 1,179 receiving yards and 13 more TDs, and you have a very explosive team.

What's critical to success against Marlin?

"This is a boring a boring answer, but it's the truth – we have to be able to run the football," Mullins said. "That's something that hasn't changed for us from week to week. Someone asked me the other day if we were 80 percent run and 20 percent pass, and I told them I really didn't know. We do the things we need to do to score points. If that means running the ball, then we are going to run. We will look to see what they give us, and if that's throwing the ball, Jackson (LeCluyse) knows what to do if they are lined up in deep-cover two, etc."

Tolar's offensive numbers don't glitter as much as the Bulldogs' output because they are more workmanlike, with freshman Peyton Brown and senior Joseph Arce each having 166 carries this season, totaling 2,230 yards and 35 TDs.

"Our game plan is to put our guys in a position to be successful, and that doesn't mean changing a whole lot for us. We are going to do what we do," Mullins said. "The times we haven't done that, we haven't been as successful. If you go in there and try and change up this and that for certain people, things can get messed up."

Launching sustained drives is Tolar's method of operation, and it helps keep opponents' offenses off the field.

"We have a good football team offensively and defensively, so we are going to hang our hat on what we do and do it to the best of our ability. I think we do a pretty good job of practice planning and executing that plan," Mullins said.

"Jackson is out there for us because he's an intelligent quarterback who makes good decisions, and he's not just a threat through the air," Mullins said.

Defensively, Tolar is led by linebacker Brock Owens' 93 tackles and Jasen Stephens' 85 stops. Garret Nation (60) and Peyton Rains (52) are next on the Rattlers’ tackle chart.

Friday's game is set for a 7 p.m. kickoff at Alvarado High School.