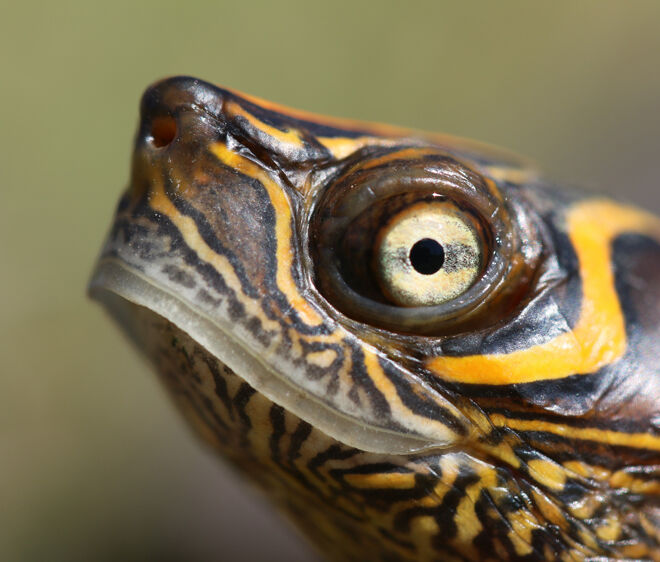 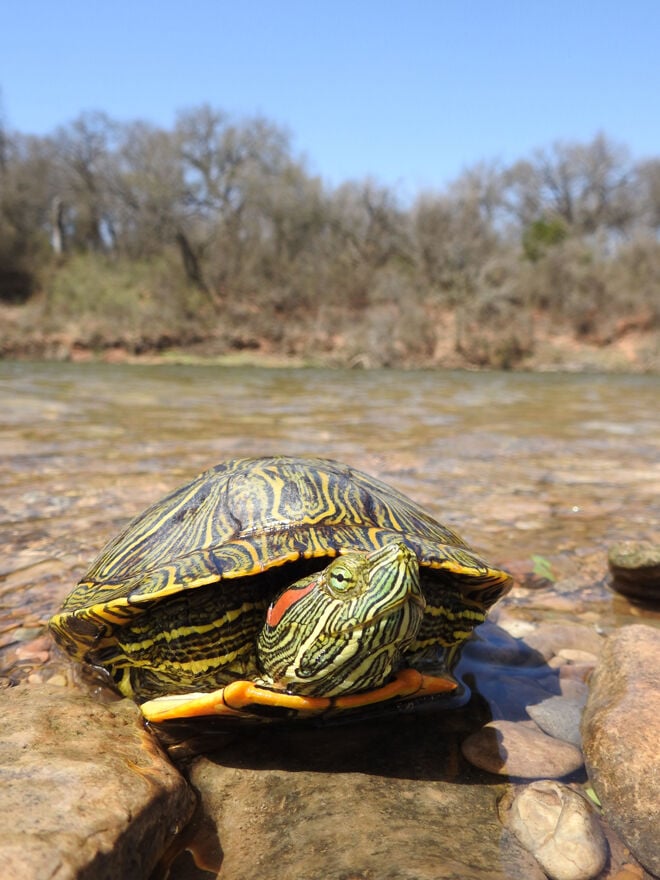 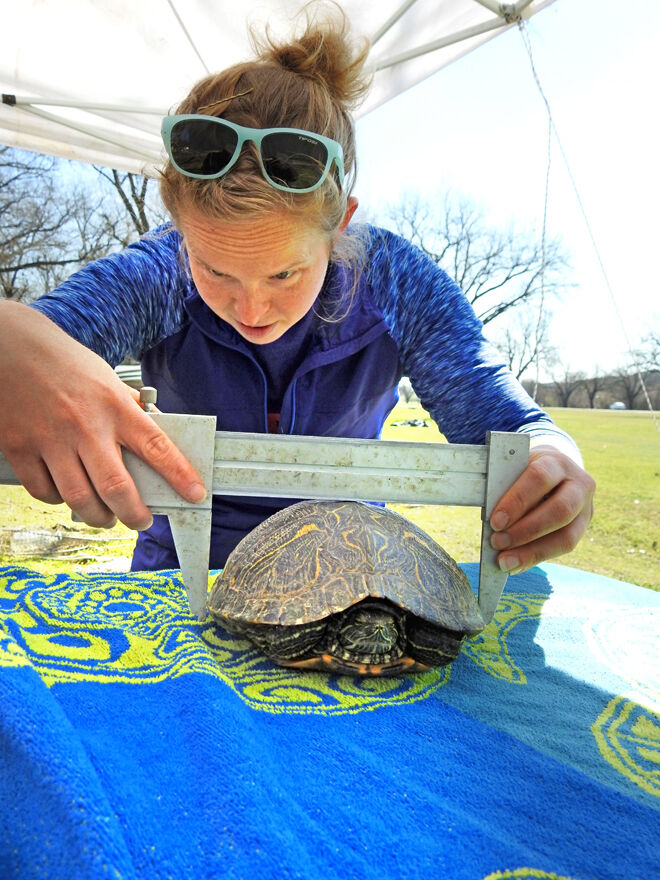 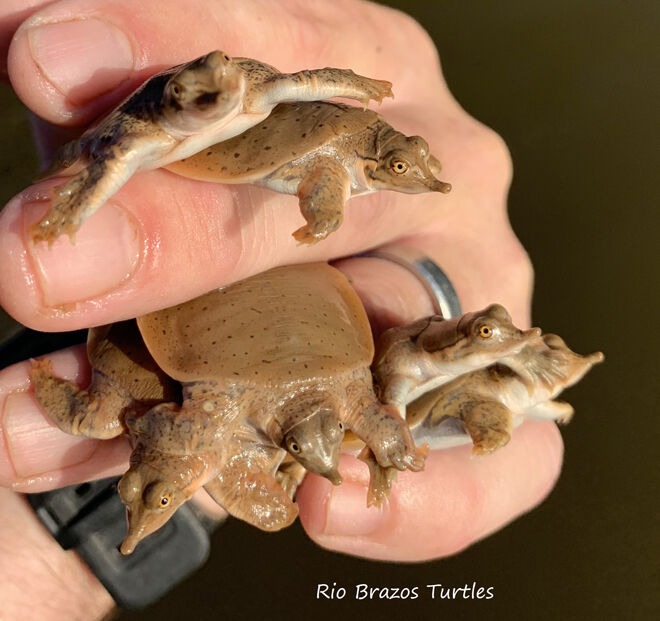 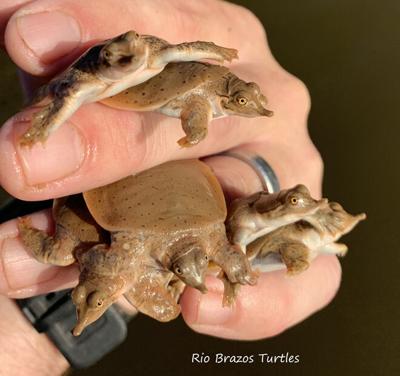 Volunteer researchers wade the Brazos to learn about alluring terrapins

Something a thirsty cowboy might order at a West Texas watering hole?

Maybe, but these are also species of turtles making their home in this part of the Brazos River. There are more – spiny softshells, smooth softshells, common snapping turtles.

Brinker is Fort Worth Paschal High School’s environmental science teacher and creator of the Rio Brazos Turtle Project, similar to his Trinity River Turtle Survey. He and volunteers from the Rio Brazos Chapter of the Texas Master Naturalist program have been researching the various turtle species in Hood County.

Their research began in October and resumed last month on the Brazos River in Pecan Plantation where they walked slow-motion in waist-deep water to set and retrieve baited traps of turtles. (The turtles were analyzed and later released unharmed.)

Researchers learned all kinds of facts about turtles, even something that could impress trivia experts.

Question: “How can you tell apart male and female red-eared sliders?”

Answer: “By their toenails and tails.”

Valerie Taber was one of the research volunteers. “It was exactly why I love to volunteer with the Texas Master Naturalist program in Hood County,” she said. “It was a beautiful day on the Brazos to enjoy the riparian ecosystem at the water’s edge and find red-eared sliders (the most common species) in the traps. I was really surprised to learn there are so many types of turtles in North Texas.”

Taber poked some fun at herself. “I should explain that the other researchers and volunteers were usually at least waist-deep in water, but that is closer to chest-deep for me! Thankfully I was loaned a pair of neoprene waders thanks to TPWD (Texas Parks and Wildlife Department).”

Brinker and others set traps on the far side of the river from Pecan Plantation and left them in place overnight. The hoop trap was carefully placed so that any turtles caught would have access to air to breathe. It was baited with “aromatic” fish heads and canned sardines.

“My morning volunteer task was to wade out across the width of the river with Andrew, release the hoop trap from where it was anchored, and hope it was heavy when I started to move it — heavy meant turtles inside!” Taber explained. “Then I could wade back across through the river (avoiding deep holes) to bring the hoop trap to the Pecan Plantation side of the bank, where we removed five red-eared sliders. The turtles were carefully placed in a large tub in the back of one of the trucks that cool morning for later assessment.

“Then it was my turn to refill the bait jar with wonderfully smelly (to a turtle, anyway) fish pieces and wade back out with the trap to hold it while Andrew reset it. Sometimes he selected a spot near a rocky outcrop and sometimes near one of the semi-submerged trees so popular for turtles to climb up and sun themselves. If there were no turtles trapped, the hoop trap would usually be relocated, so I would haul the trap up the riverbank and back to the parking lot as we moved to one of several other sites on the Brazos. This repeated at each trapping station. Andrew also set a seine net at one location, which required much hammering to stabilize the net in place against the current.”

After the traps were rebaited and reset, the group (and the turtle tub) returned to Brinker’s campsite/turtle research station. There, each turtle was weighed, measured and tagged with a tiny implant so it could be positively identified if it was retrapped. Their shell was painlessly notched in a particular spot for further identification, and researchers took blood and toenail samples from each turtle as another volunteer recorded the data and implant number.

All of the traps accessible from Pecan Plantation were removed about March 19 when trapping was finished. Brinker was issued a trapping permit from TPWD for the project. The permitted traps in the Rio Brazos will have a tag with his contact information and confirmation of the TPWD permit.

Are turtles in Texas threatened or in danger of extinction? Brinker has a feeling that several may be declining, according to the Green Source DFW digital publication, but there hasn’t been enough studies done to make an assessment.

In 2018, according to Hinsley, TPWD banned the commercial collection of several species of turtles that were being collected en masse and shipped overseas for meat. The department’s research showed that turtle populations are susceptible to overharvesting and that even modest commercial collection leads to long-term population decline, Hinsley reported.

Aside from having an adorable allure, Brinker told Hinsley, turtles show their value to humans by cleaning the (Trinity) river and controlling invasive mollusks that clog waterways and pipes and outcompete our own native mollusks.

"I like to compare them to goats. They really help keep (the river) clean," Brinker said.

I am a huge turtle nerd and have been doing the same study with students from Paschal High School in the Trinity River.

Is this the first turtle tagging for the Rio Brazos folks?

This was the second time surveying the turtles in the Brazos with Rio Brazos Master Naturalists, the first time was early October.

Has there been any funny or trying moments during the process?

The wind was so strong it destroyed a canopy tent, also my iPhone got wet and I had to purchase a new one. Sitting through that storm Tuesday night (March 16) in my pop-up camper with kids was terrifying.

Is the group trying to tag just one species?

We are marking/measuring all species but are most excited to learn about the smooth softshells. We are most interested in the smooth softshell because no one knows much about them in Texas, whereas most of the other species are fairly well studied. The results of the survey will trickle in slowly as we survey more locations. I don't expect anything worth reporting for another year or two, although we did already publish one Geographic Distribution note for smooth softshells in Hood County (they hadn't ever been documented there), and we have another similar publication for Mississippi map turtles that should be out in a couple months.

Did you or anyone in your group know that smooth softshells existed in Hood County?

I did know that they were in Hood County, but no one had ever documented it in the literature.

Are any of the turtles endangered?

No. (North Texas has one legally protected turtle, the alligator snapper.)

Anything else you think would be of interest to our readers?

This is a citizen science project and we welcome volunteers from the community.

What is the benefit of turtles …. Or turtles in the Brazos? We know they sometimes steal fishermen’s bait!

Turtles are in the middle of the food chain and help keep algae/aquatic vegetation from taking over and help recycle nutrients in dead fish/insects/plants that would otherwise smell and foul water quality. I know that oftentimes fishermen remove them from stock ponds, but they actually help out the fish by keeping the algae and other plants in check, and usually only eat fish that are injured or dead (fish are too fast to catch, although I am sure it occasionally happens).

Have you ever eaten turtle or turtle soup?!

I had turtle soup as a child but don't really remember much about it — pretty sure it was a common snapper. Alligator snapping turtles in East Texas and Louisiana are typically what folks make soup from.

Did you have an aquarium and/or keep turtles as a kid … or maybe now?

Yes, I have always had pet turtles and still do.