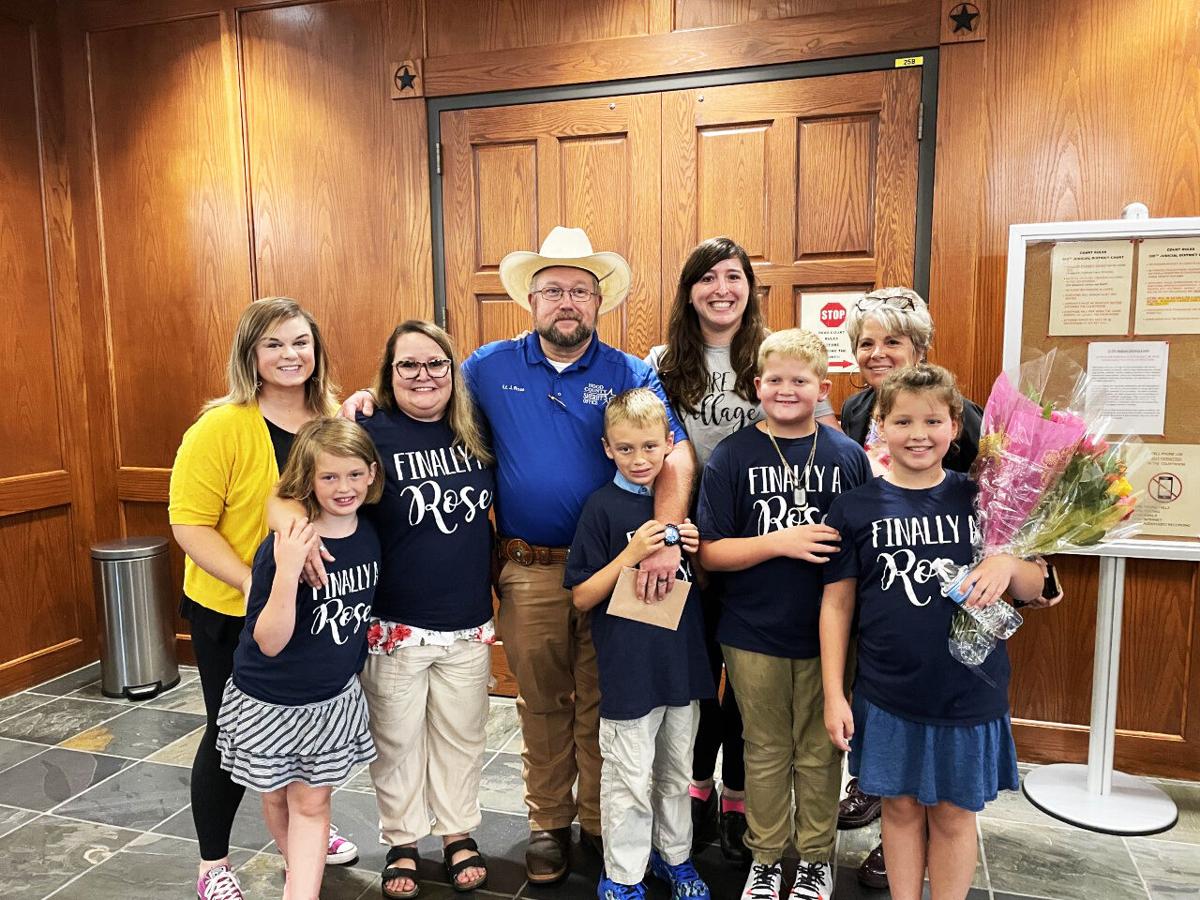 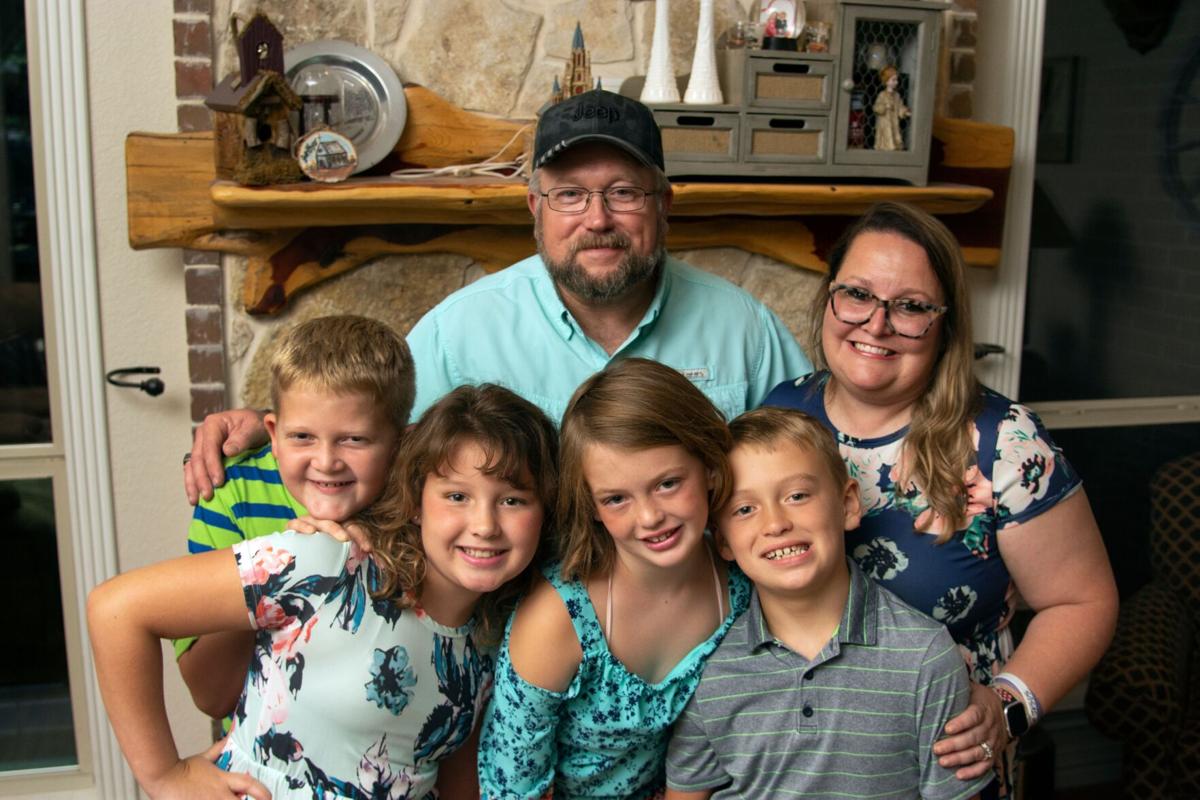 It’s been said that a parent’s love has no boundaries, and that is especially true for Johnny Rose and his wife Lucinda.

After fostering four siblings and fighting for adoption for seven years, the couple finally received the greatest gift of all on Wednesday, Aug. 18 — their family becoming whole.

Johnny and Lucinda started the journey to become foster parents in 2013 — after only being married for a year — because they both felt “led to do it through God.”

In September of 2014, the couple became foster parents of siblings Karter, who was only a year old at the time, and Ayden, who was 5.

“We went through all the training and got certified,” said Johnny, who is a longtime lieutenant with the Hood County Sheriff’s Office. “The foster agency called and said, ‘We got two boys. You got 30 minutes to decide,’ and within five minutes, she (Lucinda) is back on the phone.”

But Lucinda was certain about accepting the boys.

However, their transition didn’t come without obstacles.

“In the first night that we had the boys, I think I made 14 trips to Walmart,” Lucinda said. “We didn't have diapers. We didn’t have bottles. We just weren't prepared for the age group that we took, I guess. We spent the majority of the night trying to put a baby bed together. A baby bed that we didn't have any instructions to. And then, we didn't have car seats.”

Not long after they started fostering them, Johnny and Lucinda found out that the boys had two sisters as well, Averrea, age 3, and Zoe, 2, which led the Roses to foster them a month later.

The Roses had all four children for a total of 11 months before they were removed from the home and given back to their biological parents.

“As foster parents you can't intervene unless you'd have them over a year, so that was kind of heartbreaking because we've always felt like God told us they were our kids,” Lucinda said. “Think about parenting kids for 11 months, and then they get yanked away from you, and then it's like grieving a death of a child because you can't see them, talk to them or anything else. They're gone.”

Lucinda compared that time of her life to a scene from the movie, “The War Room,” where the main character, Ms. Clara, has scriptures and notes posted on the walls about what she needs to pray for.

“I did exactly like the movie where she put up scriptures all over the place. That was the only thing that I could fill my head with, you know, because I was grieving so bad,” she said.

On Ayden’s birthday, Lucinda was in his room painting a baseball on the wall. Johnny said when he walked in to check on her, she was crying as she was painting the baseball.

“It kind of hurt so much that I gave up (hope), but then my wife, she kept praying and she always said her and Jesus prayed them back into the house,” Johnny said. “Within four months, we got them back.”

At one point, the Roses were fostering nine kids total.

“I used to think that being a foster parent was going to be like, rainbows and butterflies — that it would just be like caring for somebody else's kid, like my friend's kid or something like that,” Lucinda said. “When you first get a foster kid, they have a lot of baggage, and you go straight into spiritual warfare because that kid doesn't know you. It's really rough.”

Lucinda and Johnny have had to deal with several behavioral issues from the kids.

One time, Zoe bought $500 worth of baby equipment on Amazon. Another time, Averrea carved the letter “R” on the side of their van door.

Lucinda also talked about a time when the girls started throwing a tantrum in Walmart because she wouldn’t buy them a coloring book.

“I’m having to carry both of them out and they swipe the whole candy aisle coming out of Walmart,” she said. “I’m like, ‘Lord, just get me out of this store.’”

Lucinda said Averrea showed the most improvement in her behavior over the years.

“She had to spend 10 days as a four-year-old in the psychiatric ward. She had an attachment disorder,” she said. “She could throw a temper tantrum for four hours straight and not even bat an eye. She would pull hair, bite, kick, scream, run off. We used medication to help with her behaviors. When she was around seven or eight, I was able to remove her from all of her medications that she was on.”

Now at 10 years old, Averrea is “well-behaved” and a “good girl,” according to Johnny.

“It shows that foster care is messy and hurtful,” Lucinda said. “It will forever be part of her testimony how God changed her.”

PART OF THE FAMILY

The kids are excited that they can officially be a Rose. T-shirts were made for them with the phrase, “Finally a Rose.”

Ayden considered himself a Rose when he was in the second grade.

“I started noticing his papers (school work) coming home from school and they were saying, ‘Ayden Rose, Ayden Rose.’ He's like, ‘Mom, I don't need a piece of paper for me to be a Rose,’ and I was like, ‘You technically do,’” Lucinda said, laughing.

She even remembers the exact day that Aiden decided to call her, “Mom.”

She said, “We were at Chick-fil-A and he was playing in the kid area. I said, ‘Come on Ayden. It's time to go,’ and this kid goes, ‘Hey, your mom's calling you.’ He comes out and gets in the car, and I could tell he was super sad. I'm like, ‘What's wrong?’ He's like, ‘Well, that kid said that you're my mom, but you're not really my mom.’ And I was like, ‘No, I'm not really your mom. But you can call me anything you want to call me. You can call me your aunt. You can call me your mom's friend. You can call me anything you want to call me, Ayden, but grandma. I'm not old enough to be grandma.’ He goes, ‘I do think I want to start calling you mom. Would that be OK?’ I was like, ‘That would be OK if you want to start calling me mom.’”

“We have a third, a fourth, a fifth and a sixth grader,” Lucinda said. “In the movie, ‘Instant Family,’ it's really like that.”

“There's something all the time. It's never a dull moment,” Johnny said. “I feel like God has set them apart. I don't know what kind of plans God has for them, but it's gonna be something big because I feel like He's kind of pulled them apart from that lifestyle that they were in, and He's got some plans for them and we're glad to be a part of that.”

“I had a very traumatic childhood as a kid myself, not that I was in foster care or anything, but I did go and live with my grandmother,” Lucinda said. “I just decided that no kid should have to experience the things that I experienced as a kid and that I could give them a better life.”

Johnny said he gives all the glory to God for allowing them to adopt Averrea, Ayden, Karter and Zoe.

"There's a lot of fear in this world. We want to be part of that story to give people hope that there's hope in God, there's hope in Jesus, that things will work out,” he said. “It may seem like there's things that are trying to keep you down and scaring you but there is hope. God does the impossible. We've got to learn through this that God is faithful, and that there's nothing impossible. When you looked at this, it was just a huge mess that didn't seem like it was ever going to work out and — not by our time but His time — He slowly worked it out and made it possible so we could adopt them. We're proud of that.”

Lucinda is currently working on a book detailing everything they experienced as foster parents. She said she hopes to get it finished within the next year or so.

Once a month, she also mentors other foster parents who are dealing with children who have emotional or behavioral problems.

“Our story is kind of a story of hope that their God will fulfill His promises. He’s faithful,” Johnny added. “No matter how long you’ve been praying for a problem, He will answer you — just don’t give up.”

Johnny has been working in law enforcement for more than 30 years — 27 of that at the Hood County Sheriff’s Office. He has twin 28-year-old daughters, Ashley and Jennifer, from a previous marriage.