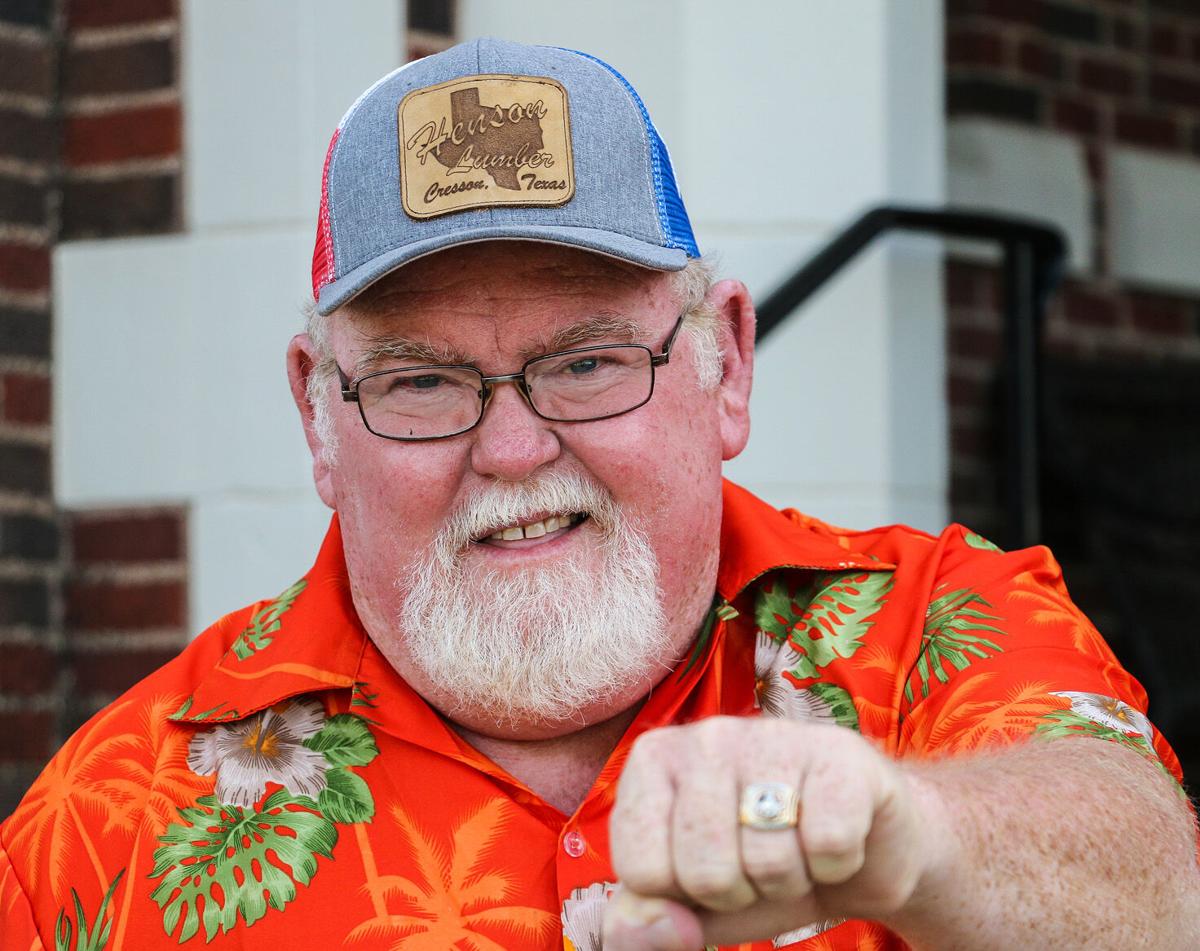 MASONIC MIGHT MITE: Charlie Cloud displays his Masonic ring during a visit to the former Forth Worth Masonic Home for Orphans. 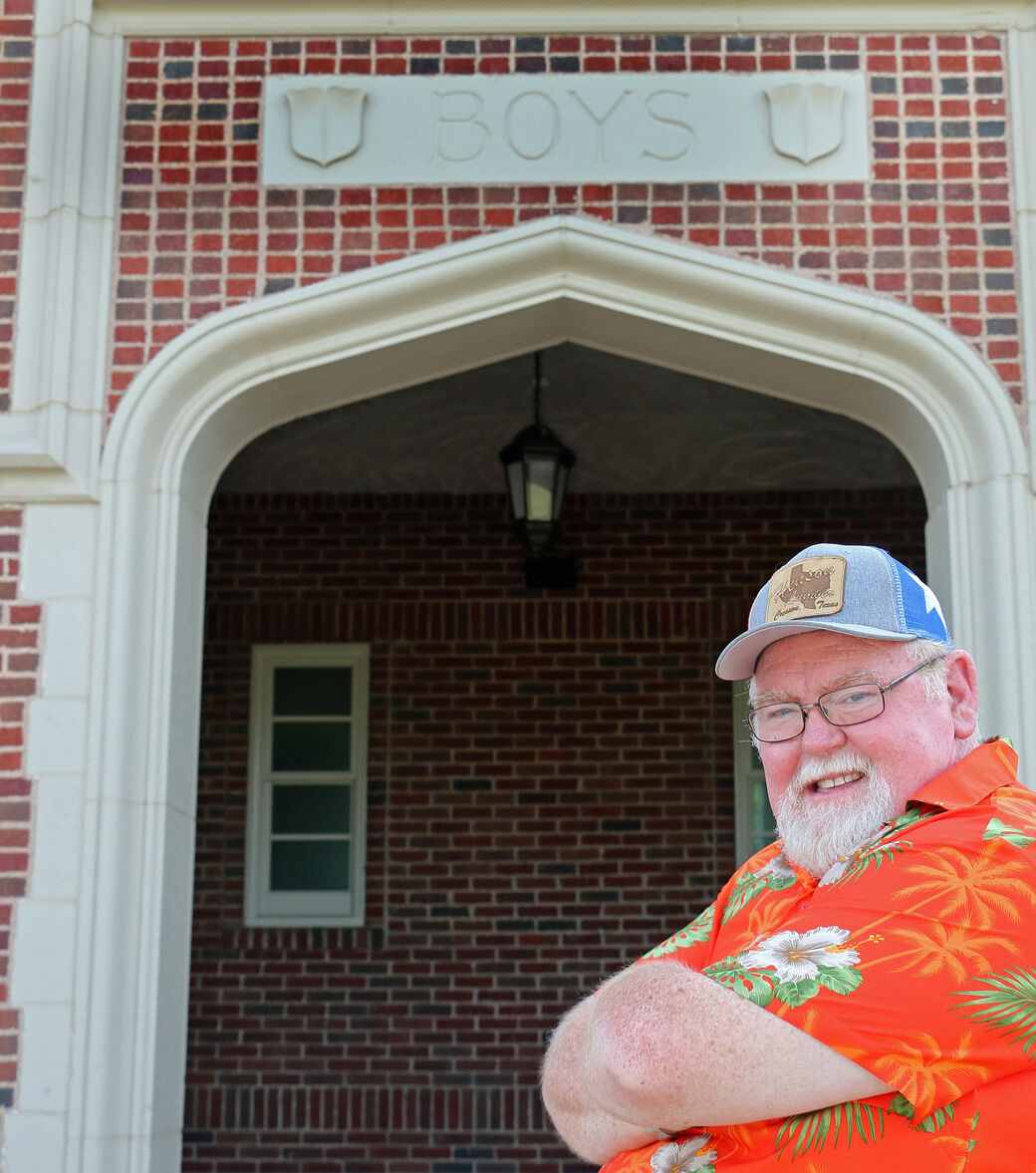 Charlie Cloud in front of boys dining hall at Fort Worth Masonic Home for Orphans. 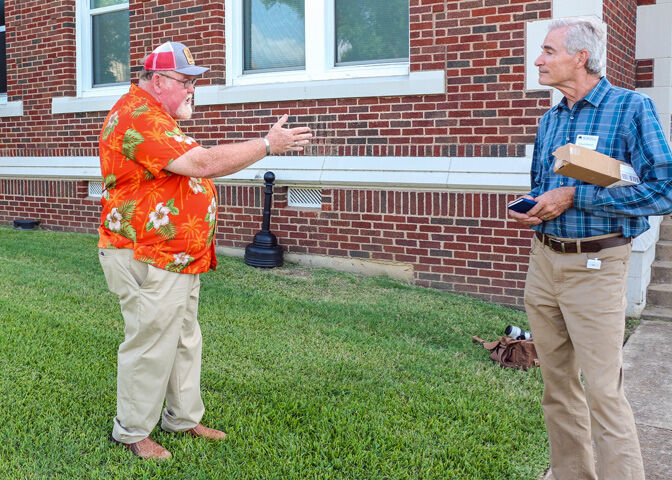 FORT WORTH — Charlie Cloud went home Wednesday, and his memories burned like wildfire.

"This is where I kissed my first girl," Cloud said as he stood in front of what used to be the girls cafeteria entrance at the Masonic Home for children in Fort Worth.

The brick building's architecture provided a tiny hiding space behind a tall structural support just perfect for a stolen kiss.

That first kiss came in 1974 when Cloud was at the tender age of 14, and his first love, Pam, is still a friend today.

As he recalled that long-ago moment, Cloud was shadowed by Chuck Burton, who works for ACH Child and Family Services as its marketing director.

Burton's been at his job four years, and having an actual former student on the campus was both a treat and a chance to glean some history about the campus.

"Over there that building at the end that was the superintendent's residence, but we just called it 'the residence,'" Cloud said as he pointed to the south end of the campus.

Looking to the north, Cloud recalled the location of the school's older and younger boys dorms. Students could look out their windows when those structures were still standing and see the Mighty Mites' football field.

There is little to remind people about the Mighty Mites except "Might Mite Drive" and the "Mighty Mite Preparatory School" (no affiliation) across the street and one dusty football lying under a wicker bench in front of the former "older girls" dormitory.

That fabled Might Mite gridiron is now a super Walmart. The trophies and football memorabilia are all gone – now lodged at the Fort Worth Masonic Temple – only the memories remain on campus.

Pointing up toward the campus chapel, Cloud recalled a wild night in which the boys decided to get with times in 1974 and live up to the Ray Stevens' hit song, "The Streak."

The adventure involved post-it notes, no clothes, a lighted flag pole, girls with their faces pressed to the windows of the two-story dorm, and boys feet moving at such a blur the Mighty Mites would have been proud.

Cloud came up with the idea of unscrewing the flagpole's lightbulb and plunging bare hineys into the darkness.

The next day when the school's staff gathered up those who had participated in the stunt, Cloud was passed by — but not for long.

"I thought I had gotten away with it, but a little later, they got me too," Cloud said with a laugh.

As he approached the campus chapel, another fond memory came to mind how Cloud was responsible for ringing the bell to bring students for mass.

Cloud's campus visit was a little bittersweet, with what was once his home now serving a different purpose to help children.

"That's a little sad when you think about it because we were the last ones, and when we are gone, there won't be any Mighty Mites."