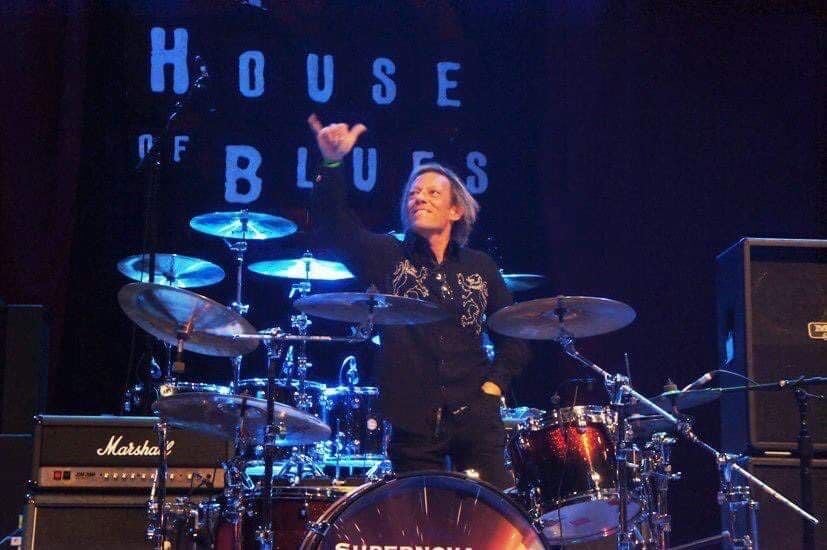 ROCK ON: James Michael McLester flashes the “rock on” sign before opening for Stryper while at the House of Blues in Dallas in 2012. 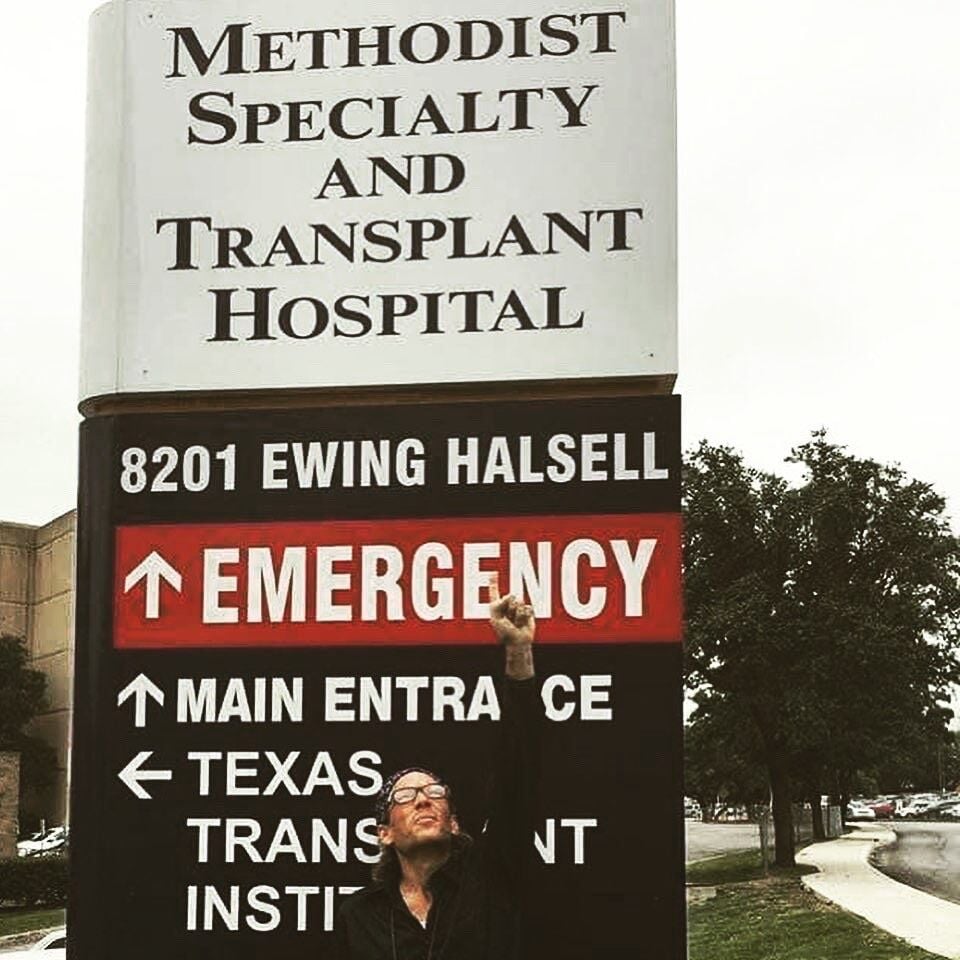 I WILL PREVAIL: Michael McLester poses in front of the Methodist Specialty and Transplant Hospital sign in San Antonio in January 2016, after his second follow-up appointment following his kidney transplant surgery.

ROCK ON: James Michael McLester flashes the “rock on” sign before opening for Stryper while at the House of Blues in Dallas in 2012.

I WILL PREVAIL: Michael McLester poses in front of the Methodist Specialty and Transplant Hospital sign in San Antonio in January 2016, after his second follow-up appointment following his kidney transplant surgery.

For years, James Michael McLester of McKinney was living the life of a rock star by performing as a drummer in several bands.

Those bands performed on some of the area’s biggest stages.

But that all changed in 2001 when McLester temporarily lost his vision at the age of 33 and was later diagnosed with kidney failure.

“Images revealed I had white cotton spots that shut down the vessels in my eye. It was temporary,” he said. “I had several eye exams since and they were all clear.”

The cause of his loss of vision and kidney failure was a mystery until a few years later when a heart specialist confirmed that the mercury from the amalgams (metal fillings) on his teeth that he received when he was 11 was likely a main contributor to his health problems.

“I had no idea the (silver fillings were) 51% mercury,” said McLester, who has family members living in Hood County. “I'm not a person that is scaring the world to say, ‘if you have a mercury filling, you're going to get kidney failure.’ I just learned through my own story when they tested the matter out.”

In 2003, he had to undergo emergency dialysis and required “around-the-clock" care for eight days. He had to get a blood transfusion and noted that “30 pounds of fluid” had to be removed from his body.

“I had to go one by one to get the fillings out. It was a process,” he said.

McLester was finally put on a kidney transplant list in 2007 and from there, it was a waiting game.

After seven years — and witnessing three potential donors fall through — he was contacted through Facebook by an old friend, Laura Workman, who agreed to get tested to see if she was a match.

Fortunately for McLester, Workman tested positive as a kidney match. The surgery was scheduled for Dec. 9, 2015 and was successful.

McLester said he had to wait a total of about 13 years before he received a kidney transplant.

“With me, I wanted a living donor,” he said. “(Kidneys from) living donors typically last 18 up to 30 years or longer, versus a cadaver, when they take it from someone who's been in a car accident or something. I knew I was only 32 years old at the time, so I knew that if I made that one decision, I hopefully wanted to make it in a sense where I was making a long-term (commitment), having not been married or fathered kids.”

With his health on the mend, he jumped right back into performing and was later nominated as a Texas Hall of Fame musician. As he was reaching out to encourage his friends and family to vote for him, through Facebook he met Kristen, and they eventually married.

"We'll be married five years next April, so that shows you the difference in one act of kindness out of nowhere that led to that (finding love), from a guy who was living with his mom and going to the machine, just waiting, waiting, waiting,” he said.

His community concert series, Rock4James, will have its seventh performance at 7 p.m., on Sept. 18, at Granbury Live.

The event will feature U2une, McLester’s salute to the music of popular rock group U2, a John Mellencamp tribute and “Jake & Elwood” of “Briefcase Blues” will host as emcees and auctioneers.

All proceeds will benefit the South-Central Texas Help Hope Live Transplant Fund in honor of McLester, to help raise money for his medical debt.

Help Hope Live is a high-ranking 501(c)(3) nonprofit organization that has been assisting the transplant community for more than 30 years.

“If someone needs a liver transplant, heart transplant or they have a catastrophic illness like Lou Gehrig's disease, if they qualify based on their need and their financials, then they can create a campaign with Help Hope Live that's currently helping over 3,000 families in Canada and North America,” McLester said. “For me, it was gonna cost 20% out of pocket for the $227,000 surgery, so $54,000 had to be raised. It was the right answer for me at the time. Ever since I partnered with them, annually all the medical expenses that I have that are related to the transplant like maintenance, travel, medication, I'm able to present events like this to the community, and the money goes to the South-Central Texas Transplant fund.”

McLester will be performing at the Rock4James concert and will also show several videos, like a brief introduction video of who he is, as well as a before and after of his transplant.

He said he hopes he will have a couple of guitars from prominent and famous musicians in the business that can be used for a special auction and raffle.

McLester said his goal with these concerts is the hope that they will help raise awareness of kidney disease and encourage others to keep an eye on their health.

“We can help others, just the possibility of the screening, raising awareness and you can do simple tests to be tested for certain toxic elements and metals that might cause you problems down the road,” he said. “Again, it's not a crystal ball, you know, people still need to use the sound wisdom of diet, nutrition, hygiene, all those things, but this is an area of my life where I just had to get a little deeper under the hood to find out, and then the restoration began.”

McLester published a book in 2016 titled, “Wannabee Rock Star Who Finally Found the Rock,” a faith-based book detailing his music and health journey. He currently works as a nutraceutical specialist at Allen Family Drug in Allen.

His goal is to finish his undergraduate work and transfer to the Southwest College of Naturopathic Medicine & Health Sciences in Tempe, Arizona, and pursue a master’s degree in clinical nutrition.

“In my book, I said, ‘Hope is my favorite four-letter word,’” McLester added. “Hope for me was the bridge that allowed me to walk from death and disease into a new lease on life. Without hope, every step of the way where there was a fiery trial, I probably would have just fallen off the bridge into the water. I want other people to understand the impartation of hope and what it really means to stand in a place where things aren't going that great today, or for a season. But I have hope, and that hope will carry you into tomorrow.”