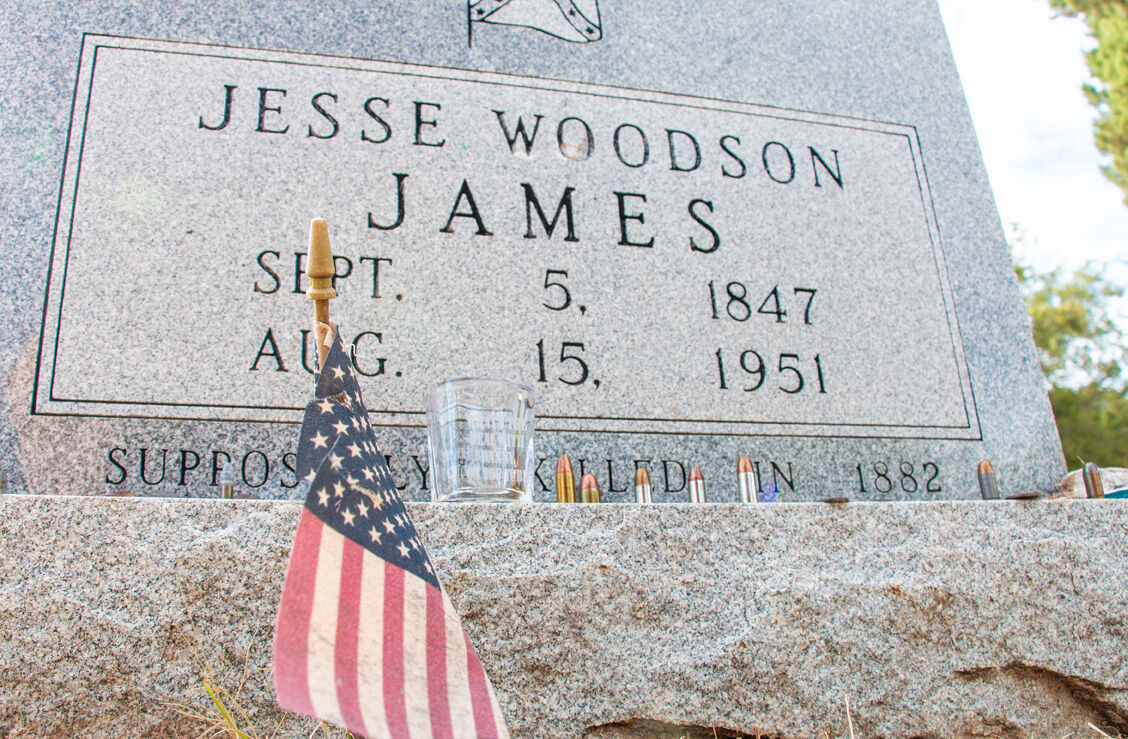 FINAL RESTING PLACE? Bullets line the gravestone of Jesse James at the Granbury Cemetery. Local ore continue to suggest the outlaw its buried there. 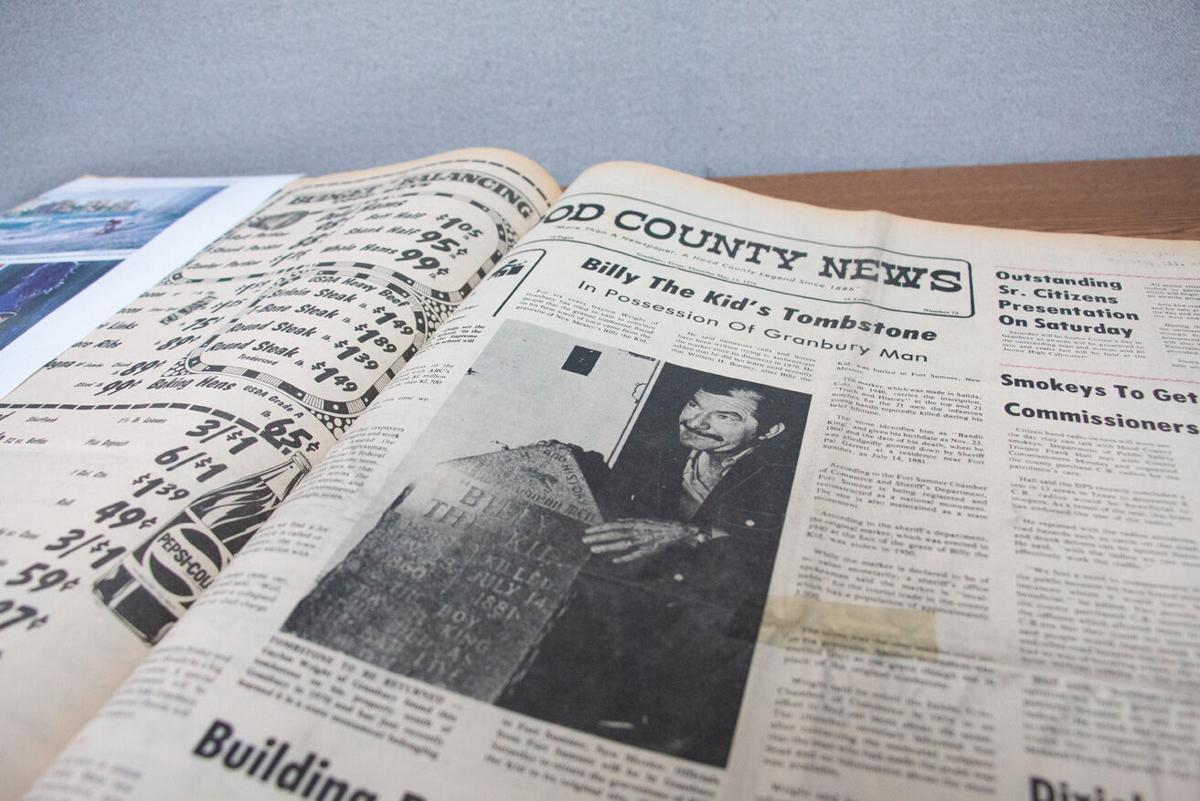 PRESS CLIPPNGS: The legend of Jesse James lives even in press coverage of fellow outlaw Billy the Kid. Somehow all the tales seem to lead back to Granbury. 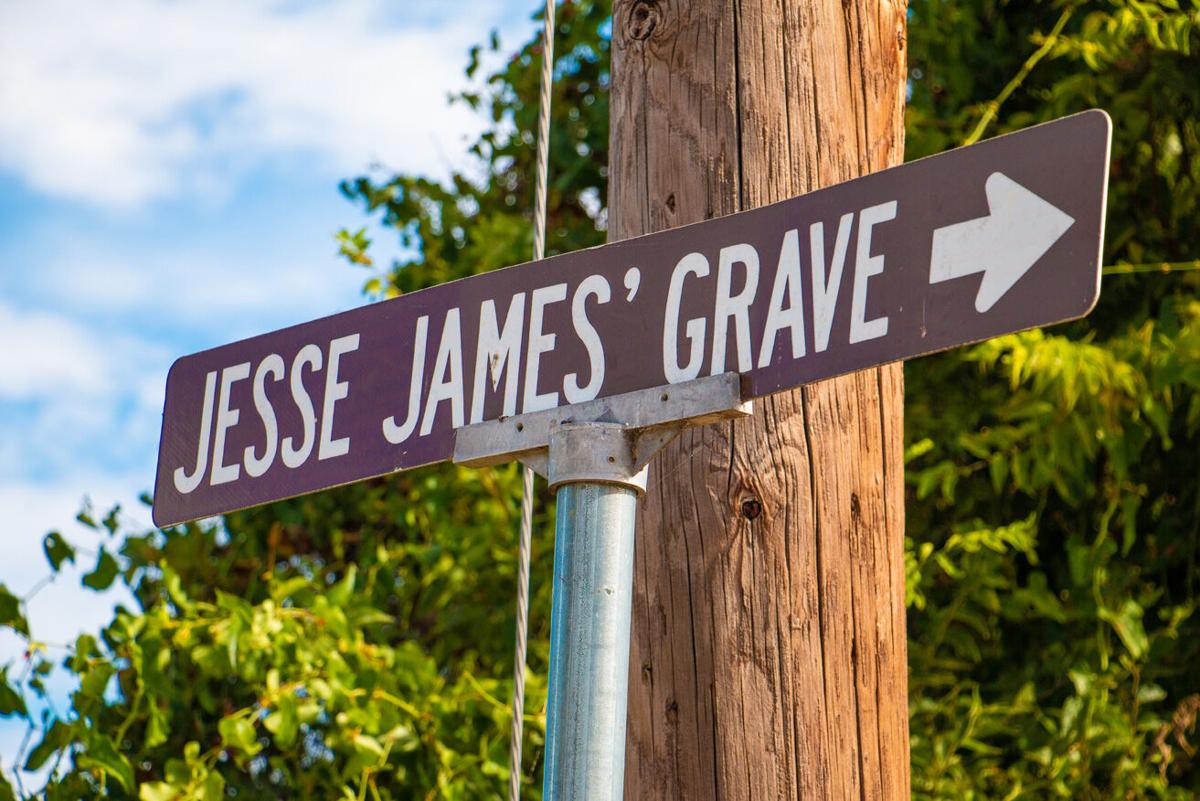 OVER THERE: There's even a street sign pointing the way to the Jesse James' grave.. 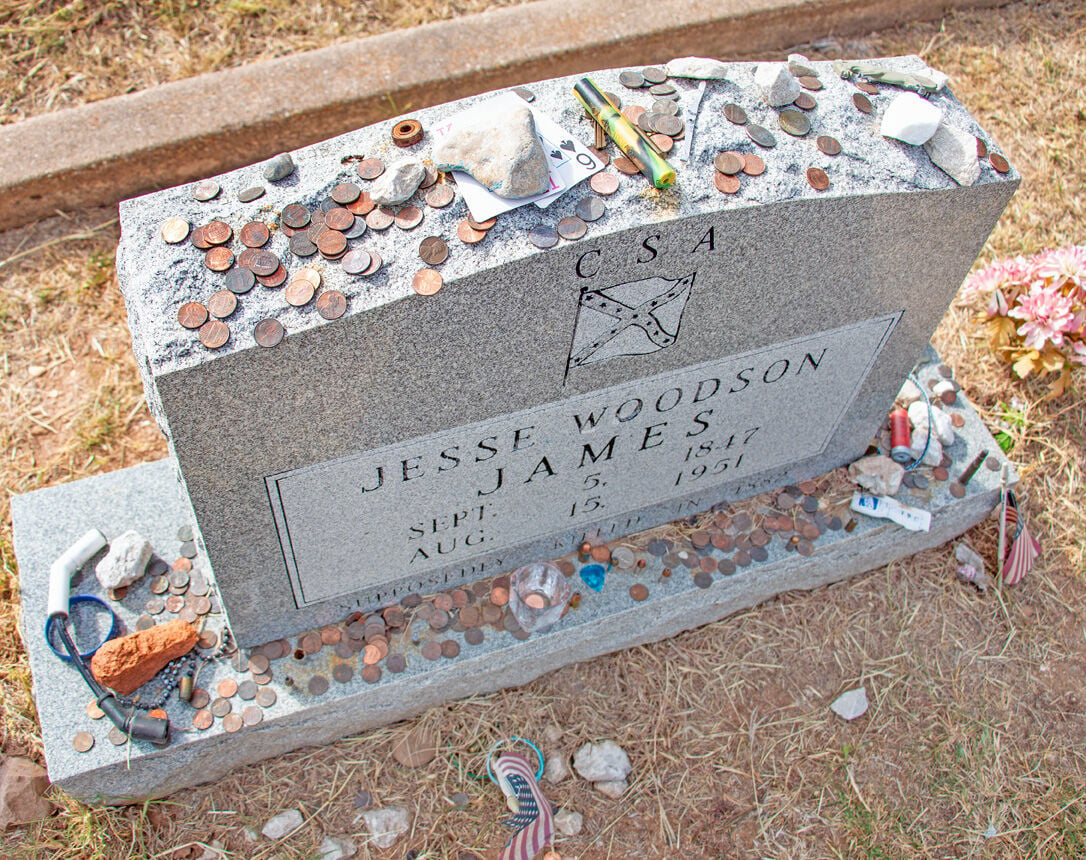 PLACE OF PILGRIMAGE: Coins, trinkets and other assorted mementos are strewn across the Jesse James gravestone at the Granbury Cemetery.

One of Granbury’s favorite legends is alive and well and is the subject of a Ripley’s Believe it or Not Road Show — and just as he has in the past, Jesse James is still eluding capture.

Depending on your choices of Western history, Jesse James was shot in the back of the head while straightening a portrait on the wall of his Missouri living room in 1882, or he faked his death and lived out his days (dying in 1951) under the name J. Frank Dalton in Granbury, Texas.

Either choice is filled with murky details, scientific facts, and passed down family history that attempts to explain away the science. There are also oddities like finding a one-armed man buried where the alleged outlaw was supposed to be interred in Granbury’s city cemetery.

TRAVELING WITH THE KID

Adding more glitter to this shimmering tale is that in the year before he died (1951), Dalton sought to prove he was Jesse James and traveled to New York — with none other than Hico’s Ollie “Brushy Bill” Roberts.

History buffs will remember Roberts as the man who claimed he was William H. Bonney, the West’s most famous outlaw Billy the Kid. Roberts’ claim was never proved, but it can’t be disproven with scientific data such as DNA – mainly because no one is certain of The Kid’s gravesite due to flooding wiping out many of the grave markers.

It wasn’t Roberts who made the initial claims he was Billy the Kid, but instead, it was Dalton who “outed” him. As he was attempting to prove he was Jesse James, Dalton told people that Billy the Kid could testify he was the true leader of the James and Younger outlaw gang.

A sepia-toned photograph taken in 1950 shows Brushy Bill visited Billy the Kid’s gravesite in Fort Sumner, New Mexico. The outlaw’s tombstone is depicted in the background.

Immediately following Brushy Bill’s visit, the monument was stolen and remained missing for 26 years until it was found under a boxcar in a field belonging to Gaylon Wright – in Granbury.

Did Billy the Kid and Jesse James ride together one last time to “rewrite” a wrong?

Yes, if you dig way back, there is a tale of how Jesse and The Kid met, and the Missouri outlaw tried to convince the deadly teen to join his gang.

It’s a web of tales that’s hard to consume as fact but so delicious on the palate of “what if” it’s too good not to sit and mentally chew on it for a spell.

How and why does a tombstone disappear for 26 years and end up in the hometown of a man who claims to be one of the two of the most notorious outlaws ever known?

Did they pull a prank together, or were they even involved?

Did Roberts snatch the tombstone and bring it to show his buddy? The coincidence of the tombstone being found in Granbury leans toward involvement or knowledge by at least one of the two.

Just imagine if it were true.

An old pickup truck pulls up in front of Jesse James’ home in Granbury, and a still spry Billy the Kid hops out and motions his old Pard to the truck’s bed.

The Kid pulls back a tarp, and there is his tombstone freshly spirited away from New Mexico. It would have been something to chuckle over.

When a court order was issued (Feb. 2000) to exhume the remains of Granbury’s alleged outlaw, it seemed the questions would finally be answered. But, shifting soil may have moved the tombstone over time, and when the body under it was removed, it was discovered to be that of a one-armed man named Henry Holland, who died in 1927. Holland’s missing arm is buried in the cemetery, too.

If the tombstone did not move -- it could have been placed over the wrong grave.

Because the court order only covered one body under James’ tombstone, there were no further exhumations done. And more than 20 years later, the question of who J. Frank Dalton was has remained unanswered.

As for scientific evidence, that is disputed to this day due to James’ body being moved from its original grave and the collection process to recover the remains when the body was exhumed for DNA testing in 1995.

That has raised the most important question among conspiracy theorists: Why was the DNA not compared to Zerelda James Samuel? Samuel was James’ mother, and she was buried just a few feet from him.

Adding to the mystery is reports the teeth submitted for testing were two of four teeth recovered from the original burial site in 1978 and not 1995. The chain of evidence surrounding those teeth is suspect.

If J. Frank Dalton wasn’t Jesse James, who was he?

The May 19, 1948 edition of the Lawton Constitution trumpeted the headline “JESSE JAMES IS ALIVE!  IN LAWTON!” the reported 100-year-old man then went on tour promoting himself as the legendary outlaw.

Dalton’s final stop would be in Granbury, Texas.

One suggestion is that Dalton was actually “Bud Dalton,” a fringe member of the James and Younger brothers’ outlaw gang.  A Bud Dalton is mentioned in the Brass Bucket Treasure story, a tale of buried treasure involving Jesse’s brother Frank James in the Wichita Mountains of Oklahoma.

Regardless of what one believes, there is a great unsolved mystery surrounding Granbury’s J. Frank Dalton and the reported multitude of healed bullet wounds (32 or 33) his body bore. He apparently lived a tale worth telling, but one can only speculate without proof of his actual identity.