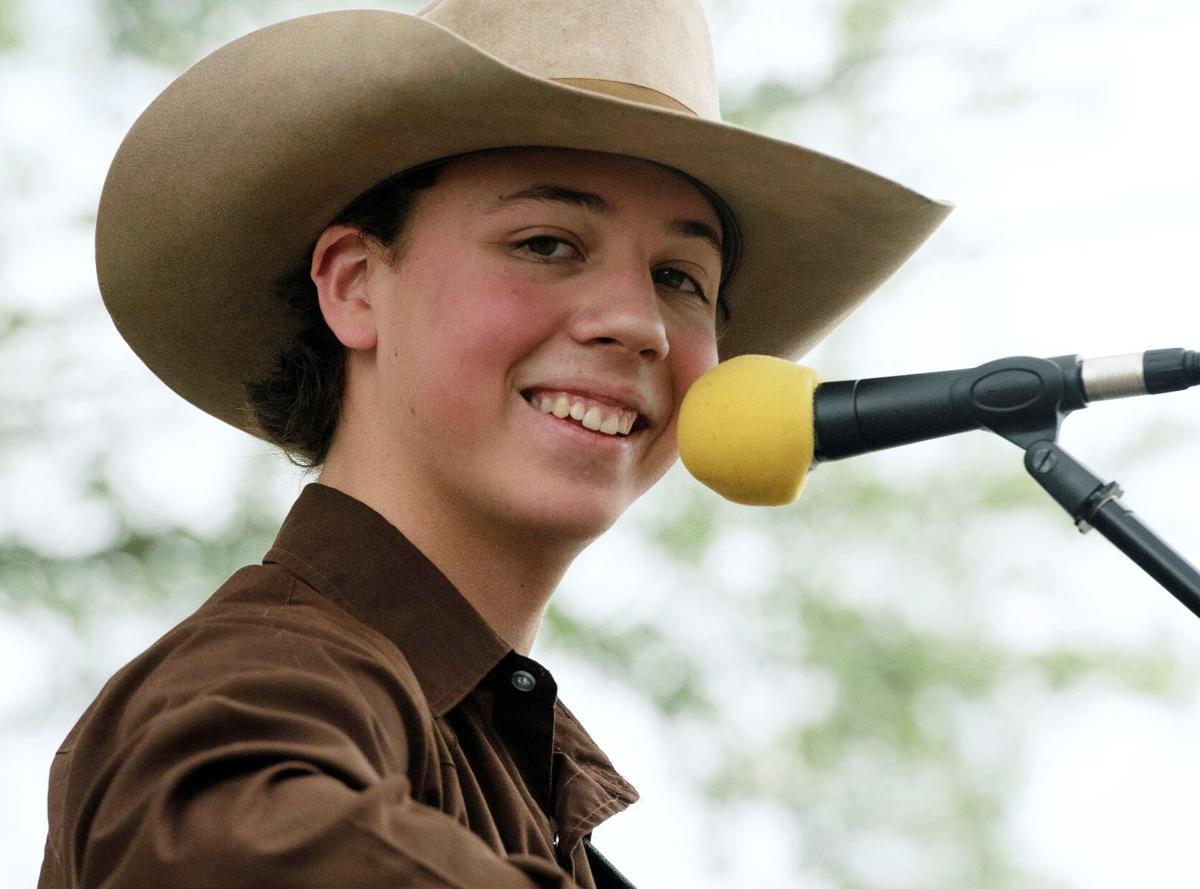 Ridge Roberts is pictured during his performance at the Texas Heroes Foundation's Stroll Thru Texas History event in May of this year at Acton. 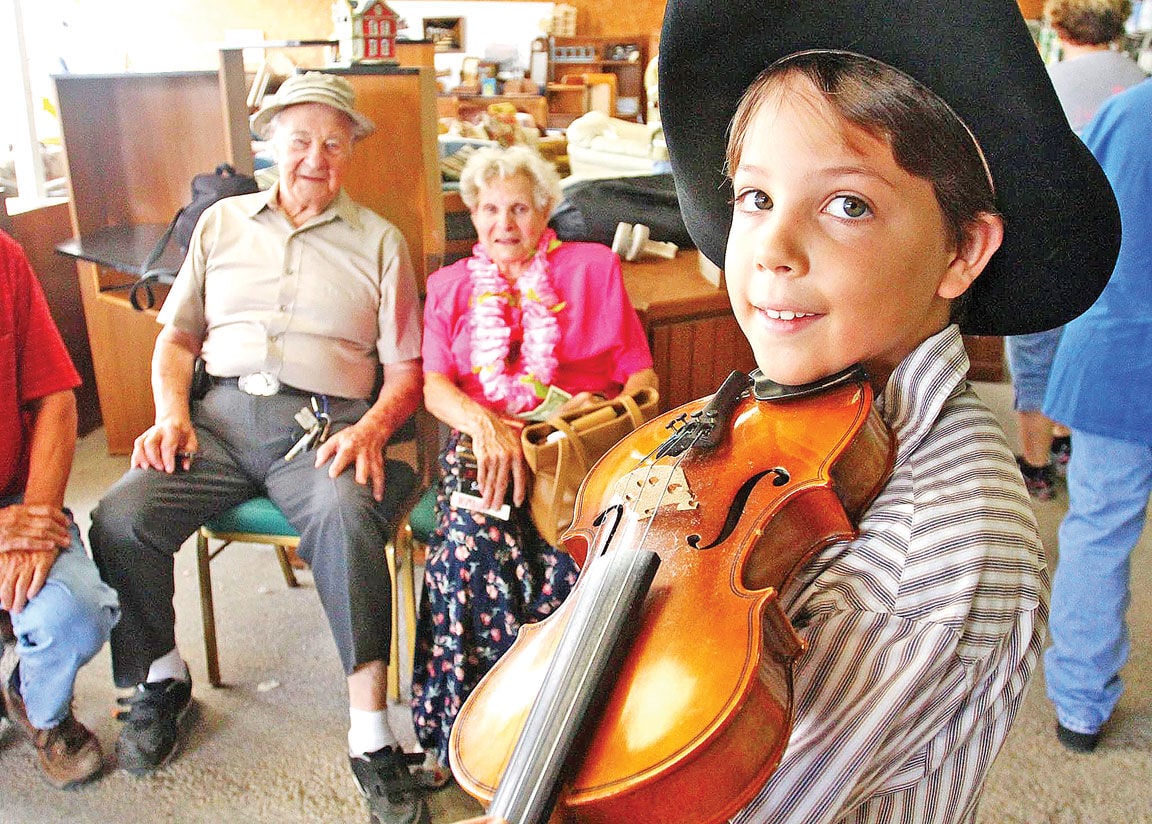 EARLY DAYS: Ridge Roberts is pictured at age nine in this 2012 Hood County News photo during one of his earliest public fiddling performances, at People Helping People in Granbury, as two volunteers enjoy the entertainment. Now 18, Roberts is preparing to perform this September at the Grand Ole Opry in Nashville. He earned his invitation to play onstage at the Opry by winning the Open Division of the 2019 Grand Master Fiddle Championship in Nashville. 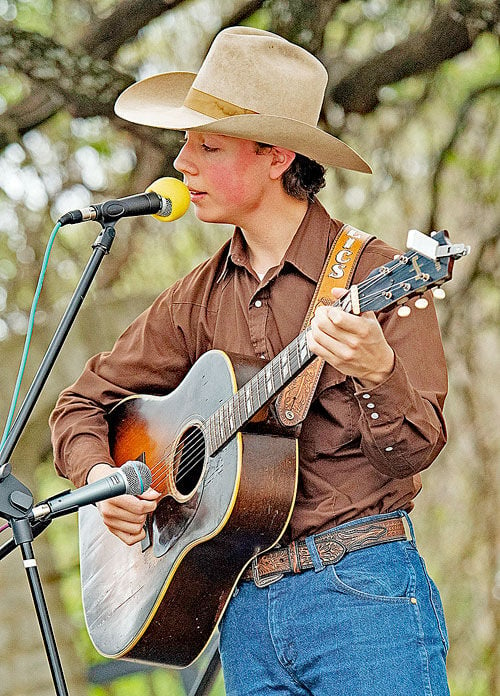 Ridge Roberts is pictured during his performance at the Texas Heroes Foundation's Stroll Thru Texas History event in May of this year at Acton.

EARLY DAYS: Ridge Roberts is pictured at age nine in this 2012 Hood County News photo during one of his earliest public fiddling performances, at People Helping People in Granbury, as two volunteers enjoy the entertainment. Now 18, Roberts is preparing to perform this September at the Grand Ole Opry in Nashville. He earned his invitation to play onstage at the Opry by winning the Open Division of the 2019 Grand Master Fiddle Championship in Nashville.

Long before he turned 18 in April, Hood County resident Ridge Roberts became a local legend as a Texas-style championship fiddler. Now he’s getting ready to play where some of the world’s greatest music legends have performed — The Grand Ole Opry.

Roberts was invited to play on stage at The Opry last year as a result of winning the Open Division of the 2019 Grand Master Fiddle Championship in Nashville. But that was among the many events postponed due to the COVID-19 pandemic. The good news: Roberts has confirmed that he will be making that Grand Ole Opry appearance this year, Sept. 4. The bad news: Since he won’t be a headline act, he will only get to play for 45 seconds.

YouTube still has a record of Roberts playing his fiddle at age nine. It was recorded nine years ago (on July 17, 2012) in the conference room at the Hood County News, during the same time frame when he did his first interview with the newspaper. The video , titled “Wiz Kid!,” ends with Roberts gazing directly into the camera lens and giving a remarkably confident nod.

In addition to his numerous successes in major contest over the ensuing years, Roberts has performed for countless clubs, organizations, festivals and senior living facilities as his local “legend” has grown exponentially.

Roberts understands the historic importance of the venue in Nashville, which had its beginnings on a radio program in the late 1920s and features country, bluegrass and gospel music along with some comedy acts.

Despite so much time having passed since he first learned he was invited to play at The Opry, Roberts still considers it “an incredible honor.”

“It’s still a really cool thing. I’m really thankful for the opportunity,” said Roberts, who will be a senior this fall at a private school, North Central Texas Academy (aka Happy Hill Farm) in Somervell County. “I’m sure my adrenaline will be going up on stage.  Obviously, of course, I’m really excited. That’s going to be one of the highlights of my musical career. I wouldn’t say the perspective has necessarily changed on it. I still revere the Opry. That’s like the Mecca, almost. I mean, it’s the place to play.”

Joey McKenzie, 57, was Roberts’ music teacher for about seven years. McKenzie knows what a big deal this is for the soft-spoken, humble 18-year-old Hood County resident. After all, he has performed on the Grand Old Opry stage with various bands multiple times over the years.

“I played on the Opry many times, and it’s an honor,” McKenzie said. “I’m just so proud of Ridge to have that opportunity.”

Performing with various bands over the years, McKenzie performed in multiple South American countries, plus “all over” Europe and Canada. He even had a three-week concert tour of Russia — where each show sold out.

“I’ve been so lucky,” said McKenzie, who made a couple of solo albums and also worked as a session musician for “about 20 to 25 years.”

Joining Roberts for the trip to Nashville will be his parents, John and Cindy Roberts, plus Cindy’s parents, Ruben and Mary Pesqueda of Joshua, along with Ridge’s girlfriend and her mother. Ridge also has three brothers — Jonathan, the oldest, lives in McKinney, while Aeden and Rio reside in Hood County.

Among the Grand Ole Opry legends Roberts appreciates the most are Texas Swing music icon Bob Wills, and country music superstar Hank Williams — who had six encores on his debut night at the Opry. Wills (and His Texas Playboys) only performed their special brand of fiddle music at the Grand Ole Opry twice — in 1944 and 1948. Other legendary country performers Roberts has listened to, studied and loved include Merle Haggard, Marty Robbins and Ray Price. Among his favorite fiddling heroes are Tommy Jackson and Shorty Lavender.

Roberts’ resume is incredibly impressive for someone so young. His major fiddling titles have included:

Earlier this year, Roberts released his first album, titled “Lone Star Fiddler.” It has 17 traditional Texas instrumental-only fiddle tunes. It’s available as a CD or as a digital download through his website (www.ridgeroberts.com).

Roberts began learning how to play the fiddle from his father. When his natural talent began to reveal itself, a professional music teacher was sought.

“We all knew who Joey McKenzie was,” Roberts said. “Looking back, he’s definitely the best teacher in my opinion. I would say, just all around for Texas style fiddling I don’t think there’s a better teacher out there. And I totally mean that. I don’t say that lightly.”

McKenzie’s own deep commitment to music led him to great accomplishments, winning three fiddling world championships (1986, 1993 and 1994), and more than 200 other titles in all.

“I’m so proud, because now Ridge has won a world championship (at age 15),” said the mentor, who moved to Texas in 1988 and settled in the Burleson area.

In addition to his own professional career as a performing musician, McKenzie has been teaching others almost since he first began learning how to play the fiddle after having first played guitar, mandolin and several other instruments as a teenager growing up in Oregon. McKenzie said he has taught “hundreds” of individuals how to play instruments, and more than 20 of those students went on to win national championships.

McKenzie said that Roberts made “quite an impression on me and my wife Sherry.”

Roberts seemed to be drawn to the fiddle music he heard McKenzie playing, even as a nine-year-old.

“As a kid you could see the joy and the interest. He was smiling the whole time,” McKenzie said.

McKenzie noted that there were some bad habits to break at first, “but you could see the raw talent he had. Even as a kid, he played with a maturity well beyond his years.”

He described Roberts as being “like a sponge” when it came to learning how to become a musician. Not only did Roberts have God-given talent, he also was devoted and worked hard at it.

“I’ve had some really talented students that didn’t work very hard,” McKenzie said, adding that Roberts often tackles difficult tunes. “He’s got so much natural talent and a great work ethic, and that combination is hard to beat. He’s kind of like a throwback. He studies the old musicians.”

Roberts’ progress as a musician was “super steady” taking lessons, McKenzie said, to the point that now “He’s at expert level. At 18 years old, he’s one of the finest fiddle players in the United States.”

“The key to his success is his love of music,” McKenzie said. “His parents are perfect parents to nurture his success.

McKenzie described Roberts’ future as a musician by saying, “I think he has an incredibly bright future, (because of) the fact that he’s so versatile. He sings, he plays guitar, he writes songs. Ridge has been writing since he was a little boy.”

According to Cindy Roberts, her son has written 65 songs (with lyrics) and more than 100 fiddle tunes (no lyrics). So far he has performed about five of them for audiences. He’s also working on his singing and intends to work that into future performances more and more.

“He’s working on being a great singer,” McKenzie said. “He’s turning into an excellent guitar player.”

“I think that’s probably where I will gravitate more toward as I get better at singing, and as I’m more comfortable doing that,” Roberts said. “It’s hard to make a living as a fiddle player, and that’s always going to be a part of what I do. But I think singing is more the direction I’m heading.”

McKenzie was a founding member of the Western Flyers, a three-piece Western Swing band in which he played guitar. When the other two band members found that ordinary life was calling them away from being a touring musician, McKenzie knew just who to ask about filling the band’s fiddler spot — Roberts.

“He was super excited,” McKenzie said. “It took a lot of work on his end. He jumped in with both feet. He took it seriously.”

The Western Flyers, with Matthew Mefford on the upright bass, McKenzie on guitar and Roberts on fiddle, has some long-distance travel ahead the fall. They have gigs scheduled in Virginia (National Folk Festival) and Tennessee, plus another major event in Pendleton, Oregon. They are also planning on an overseas appearance, although the details of that event have not been made public.

As for his long-term outlook, Roberts loves playing music as much as ever, but he has had thoughts of either going to a school to learn another trade, or getting a job that could be a flexible source of income when he’s not touring and performing.

“I definitely have been thinking about it a lot because I’ve realized … I am 18 now, legally I’m an adult .. I mean, my life is starting as an adult. I don’t think I’ll end up going to college. I have considered trade school. What I’m trying to figure out is what I can do that won’t hinder my music, that will also be stable.”

Also, his commitment to the Western Flyers remains true.

“That’s kind of a priority, making sure I can play gigs with them,” Roberts said. “So I’m trying to find things that can work with that.”

As for the short-term — the mere 45 seconds of playing time reserved for him at the Grand Ole Opry this Labor Day weekend, Ridge noted, “Probably, fiddling isn’t a big thing, anymore. At the Opry, fiddle playing has been a part of country music, but that’s just the way they do it.”

What tune will he play on the big stage?

“It’s 45 seconds. I have been trying to figure it out,” Roberts said. “I’ll probably ask Joey, my mentor, and see what he thinks and then I’m going to ask a couple of people and think about it some more.”