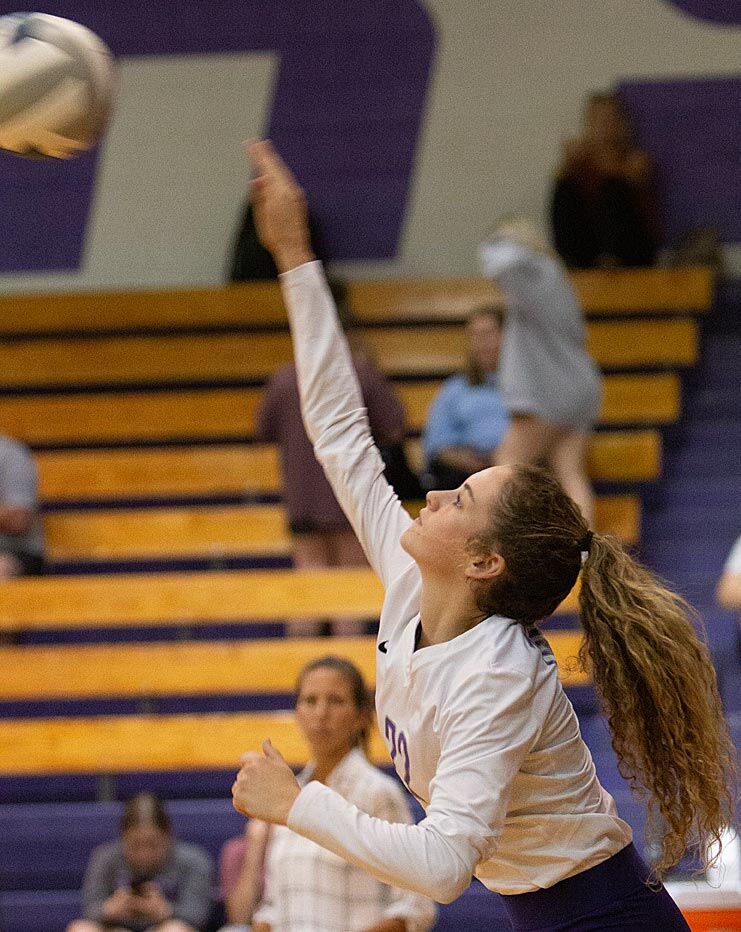 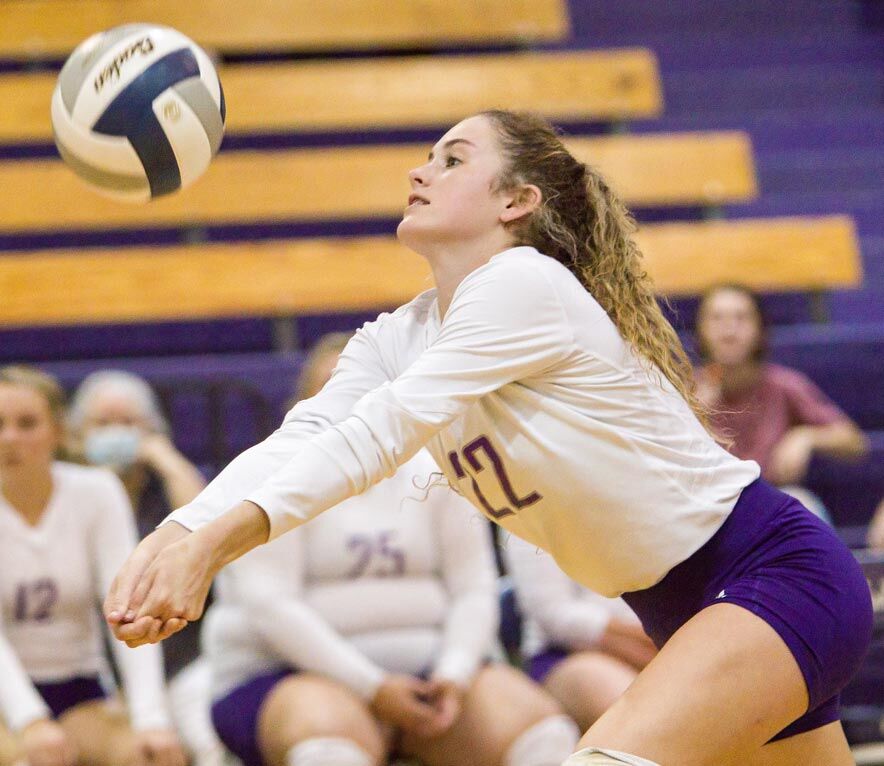 DIG IT OUT: Senior Baili Deaver can do it all on the volleyball court and is a great middle hitter. 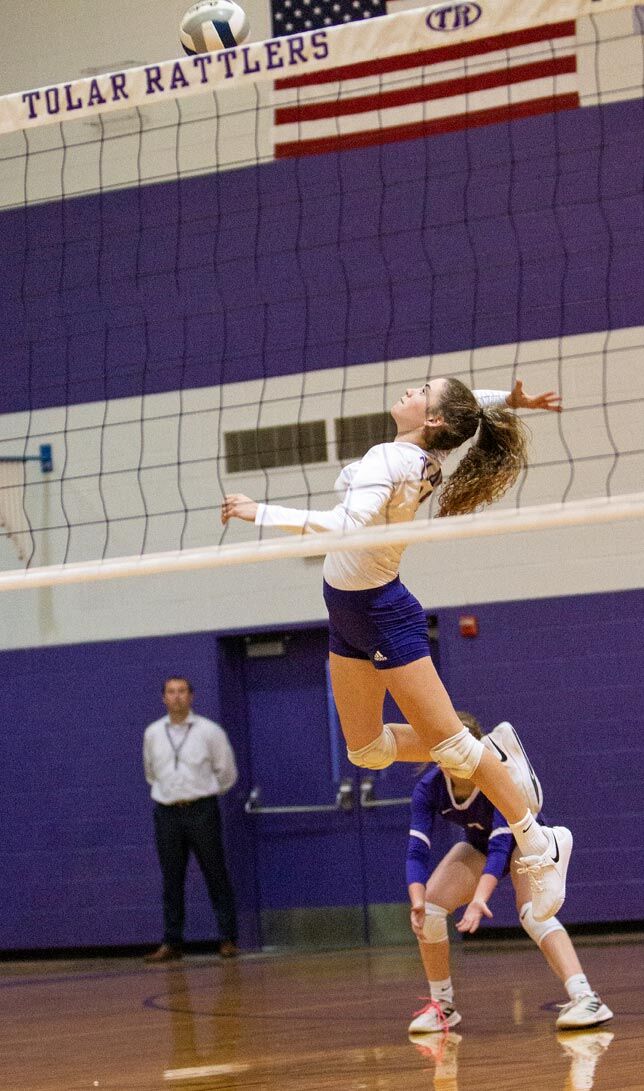 FLYING: Tolar's Baili Deaver plays well above her height in volleyball, but she has her heart set on playing college basketball.

When your daddy was the starting quarterback, and your mama was the starting point guard in Tolar, Texas, you can either live up to the legacy or surpass it. Senior Baili Deaver has done both.

Deaver’s roots run far deeper than just her parents, Justin and Leah — back three more generations. Baili’s great-grandfather, Morgan Deaver, played for Tolar. It’s unclear if Deaver’s great-great-grandmother Betty played sports in school, but she was a Rattler as well.

Tolar’s Rattler mascot couldn’t seem more fitting when watching Deaver play volleyball as she gives 110 percent to whatever she happens to be doing, and Baili Deaver does a lot and some more.

She’s a four-sport athlete, playing volleyball, basketball, softball, and jumping in track and field. There’s not much time for hobbies, but when she does get a little time, Deaver likes to spend it with her family, watching movies, and checking out the latest Netflix releases.

“With as many sports as I play, I don’t really have time for hobbies,” Deaver said. “I’m just trying to relax when I have downtime.”

A common theme to Deaver’s athletic endeavors is leadership. There’s no mistaking Tolar’s volleyball squad gravitates to their sparkplug, and coach Misty Rhodes has noticed.

“The girls look to her to take the lead, and they have confidence in her abilities,” Rhodes said.

The same can be said in basketball, in which Deaver plays point guard, and softball, as a catcher – voted all-district and District Catcher of the Year last spring.

The softball diamond isn’t the only place Deaver has earned post-season honors, and she has her hopes set on playing basketball at the collegiate level. Angelo State University scouts are already busy checking the Rattlers’ schedule to come to watch her play.

“If that doesn’t work, then I’ll just go to whatever school has a good medical program,” Deaver said. “I want to be a physical therapist.”

It’s easy to tell Deaver has been looking forward to her senior year, and she wants to make the most of it. Her goals are team-oriented as she dreams of playoff sports seasons.

An extended basketball season her sophomore year as the starting point guard lighted the fire for the postseason action and, to this point, remains one of her fondest high school memories. The year before, the Lady Rattlers failed to win a single district basketball game.

“I went into the season expecting to have about the same outcome,” Deaver said. “We lost three seniors, and so we had the same team. Then we go and play so inspirational.”

Girls basketball coach Michael Hall guided Tolar to an 8-6 district record in his first season, and the Lady Rattlers topped Boyd 47-37 and Millsap 43-32 to end the season and make the playoffs.

“We kept getting better, and at the end of the season, we won those games that took us to the playoffs,” Deaver said. “It had been a long time since Tolar has been in the playoffs.”

With that four-year drought over, Deaver wants to make some new memories this time around. She knows extending the season is the way to make that happen.

Is it the family legacy that makes her so fiery as a player?

“I think that’s some of it, but I also think it comes from being smaller (she might be 5-6),” Deaver said. “When you are smaller, you have to step up and show people you can do it.”

Deaver leads by example, but she’s not afraid to lend advice to younger players.

“I tell the freshmen that they need to play with confidence. They need to get out there and show people what they can do,” Deaver said.

As the clock ticks toward graduation, Deaver realizes her role as a senior is essential to her teams’ goals and her own. Part of reaching those goals means letting go a little bit.

“Coach Rhodes gave me some great advice about that and said it’s OK to be ‘weak’ and to have the confidence in knowing my teammates will pick me up,” Deaver said.

COVID-19 cases decline over past week

It's important to protect the monarchs